Casualty: He always wanted to be a doctor 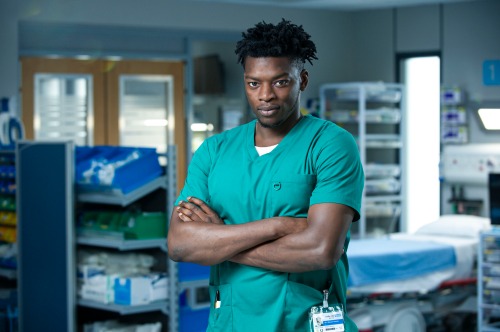 I’ve reviewed this episode over at Metro and also written an extra piece about Mason, so please give them a look.

I don’t have much more to add to what I’ve said there, apart from I’ll really miss Mason. I found the character really interesting and I loved Victor Oshin’s layered and subtle portrayal of him. He’s a really compelling actor to watch and I’m looking forward to seeing what he does next.

Comments Off on Casualty: He always wanted to be a doctor

Casualty: Not the David

– I could have slapped Ethan throughout this episode. He was distracted, unprofessional, unsupportive and just generally a bit useless.

– Though I actually emitted a squeak when Rash punched him. That’s so not like Rash.

– I also emitted a squeak when I saw that sledgehammer. It soon became apparent that it was going to be a DIY-related injury rather than a heinous crime, though. Never knock a wall down without determining whether it’s actually holding the roof up, folks.

– I love Rosa more and more every week. Her back-story about her little boy dying was really sad. I like the little family she’s made with David and Ollie. And I’m really looking forward to her mum visiting so we can see David posing as her boyfriend.

– Derek Thompson was heartbreaking in the scene with Robyn. She’s so sweet and caring – and seems to be very good with money, as she always has a bit put by to offer friends in need.

Comments Off on Casualty: Not the David

Casualty: Here he is! Back from saving lives! 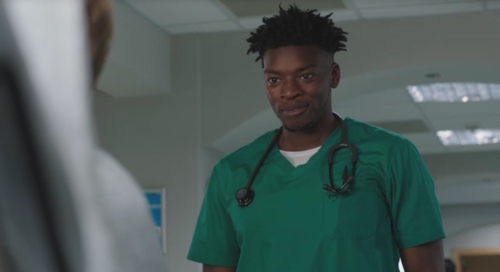 – I love Mason (I know, I already mentioned that). Honestly, Victor Oshin is just so subtle! His face can go from sly and sneery to being absolutely beautiful and kind from one moment to the next. It’s ninja-level acting, I tell you.

– But he does not get away with trying to throw Jade under his famous bus because I love her too.

– Though I am convinced all his selfishness is just a front because he’s terrified to fail. I expect his parents made huge sacrifices to put him through med school and he can’t admit any failure at all.

– But where was the kitten this week? If it’s anything like my cat when it was that age it’ll be fast asleep in a plant pot. I turned the house upside down several times looking for him and became convinced the older cat had eaten him – but 10 years on and here he is, on my desk farting as usual. You see the horrors I have to go through.

– Dialogue of the week: (Will) ‘How’s it going?’ (Mason) ‘I’m killing it.’ (Will) ‘You know we’re not supposed to kill people? It’s actually the opposite of what we do here.’

Comments Off on Casualty: Here he is! Back from saving lives!