Ah, autumn. Season of mists, mellow fruitfulness and Doctor Who  – as Keats didn’t say. The evenings are drawing in, the spiders are preparing to make their break from under the sofa and our favourite Time Lord returns. (Not to mention our favourite Time Lady…)

Regular readers will, perhaps, recall my growing discontment with the last series, and I have to confess to approaching series nine with some trepidation. The good news is that The Magician’s Assistant is a much stronger start than I was expecting…

[Spoilers below the line. You know the drill by now…] END_OF_DOCUMENT_TOKEN_TO_BE_REPLACED 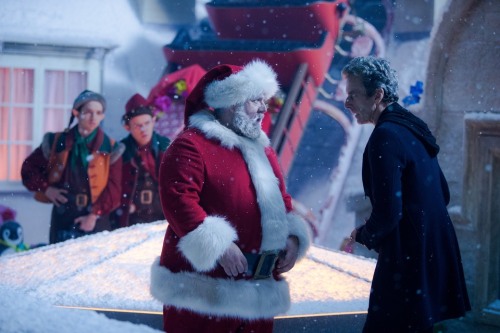 I’ve tried to be nice, I really have. I’ve reminded myself that writing and executive-producing a massive show like Doctor Who is incredibly difficult. And that coming up with new ideas for four years isn’t easy either. But I cannot reconcile the fact that the same man who wrote Blink, the Empty Child and The Doctor Dances, is the same one who Last Christmas. Somewhere along the line, Steven Moffat lost the plot. And now the nicest thing I can say about Last Christmas is that Peter Capaldi is being woefully under-served by his showrunner. END_OF_DOCUMENT_TOKEN_TO_BE_REPLACED 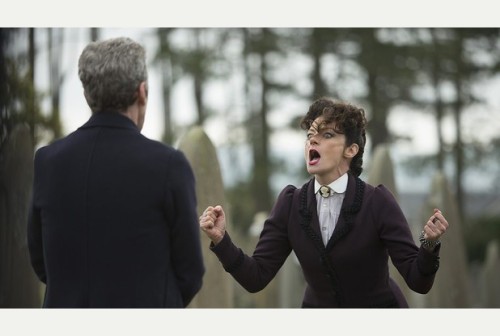 If this were Tumblr, there would be a very high probability that my submission for this evening would be the picture above with overlaid text indicating the fandom on the right and Steven Moffat on the left and something shouty in speechmarks. “Damn you Moffat!”, “This is why we can’t have nice things!” or “You had ONE job!”. You get the idea.

To be fair, Russell T Davies managed only two really good two-parter series finales (Bad Wolf/The Parting of the Ways and Army of Ghosts/Doomsday) – the rest suffered from the same puffiness that Death in Heaven was afflicted with.

The last few minutes were excellent, but (for me) couldn’t redeem the mawkish Clara and Danny scenes, the death of one of the best minor characters of the Moffat era and plot holes so big you could drop a full-grown Racnoss through them (the Cybermen not spotting Clara has only one heart, the fact that many of the dead would be beyond converting – though after last week’s horrors, I should probably be glad they stayed away from decomposition, UNIT getting the Tardis out of St Paul’s, but not Clara). Not to mention making Osgood credit OCD with an ability to rapidly count 87 moving Cybermen (she would know better, even if Steven Moffat doesn’t).

I’m holding out the slimmest hope that Missy killed Osgood’s alien doppelganger (I can see UNIT hanging on to her as a useful resource), because otherwise Steven Moffat has shot himself in the foot by writing out one of the best characters he’s created.

That said, there were moments to enjoy along the way – Osgood and Colonel Ahmed (always a pleasure to see Sanjeev Bhaskar) geeking about Thunderbirds and Captain Scarlet, with a bonus Doctor’s anecdote about foxtrotting with Sylvia Anderson, for example. I have to confess I missed the Jungle Book joke on my first pass too (at least, I assume “Man Scout” is a play on “man cub”…).

END_OF_DOCUMENT_TOKEN_TO_BE_REPLACED 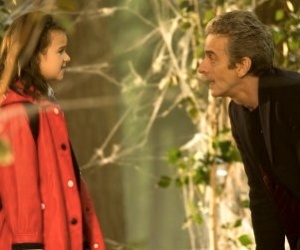 [Jo the Hat is away, so SarahLady gives her thoughts on this week’s episode]

You’re in for a big surprise…especially if the woods weren’t there the day before.

(Spoilers all the way down this week, come on, it IS episode 10!)

Firstly, I enjoyed this episode – I’ve been saying since Capaldi was first announced that he’s a natural for the part – the moment I saw him on screen in Deep Breath, I immediately couldn’t remember a time when he wasn’t the Doctor. He harks back to ‘old’ Who with his lovely nods to the grumpiness of Hartnell and Colin Baker, the silly jumping up and down-ness of Troughton, the strangely old youthfulness of Tom Baker (rather than Matt Smith’s young oldness) – he’s a joy to watch and for the most part this series I’ve loved watching everything HE does, BUT it does come with a whole heap of problems, which Jo the Hat has talked about in past weeks.   END_OF_DOCUMENT_TOKEN_TO_BE_REPLACED

Doctor Who (8.9): It really is bigger on the inside

[Spoilers all the way down this week]

Now that was more like it… Flatline was proper scary Doctor Who, the kind of Who that gives its youngest viewers nightmares and leaves older viewers thrilled and delighted.

You could say the basic premise is that two-dimensional creatures are wreaking havoc on Earth by experimenting with the three dimensions they are now encountering. But, you could equally say that the basic premise of Flatline was to make Clara walk in the Doctor’s shoes for an episode…

Either way, Jamie Mathieson has done an excellent job (even better than last week’s Mummy on the Orient Express).  As have the lighting crews, SFX and CGI teams, and director – Flatline looks amazing, in particular the creepy scenes in the houses and the subway murals coming to life.

END_OF_DOCUMENT_TOKEN_TO_BE_REPLACED

For a while I did wonder if the cooling of my relationship with Doctor Who was a case of “it’s not you, it’s me”, but The Caretaker has convinced me that this rough patch isn’t because I’ve got bored, started seeing another show or set the bar of my expectations too high.

God knows, I love the Doctor and I love Peter Capaldi but while the rest of the show is the equivalent of never doing the washing up, making snide remarks about your best friend and leaving dirty socks in the middle of the kitchen floor, I’m going to keep looking at the door and wondering if one day I’ll walk out and never come back.

My problems with Doctor Who at this moment:

My problem with The Caretaker is that those two problems are no longer in the background, mixed in with adventure and aliens and peril and plot, they are front and centre – with the alien threat little more than an excuse to make all this happen. I spent 45 minutes sloping from bored to infuriated, with little detours into contentment when Courtney and the Doctor interacted. Oh, and I perked up for Chris Addison and the trailer for next week’s episode.

[Straight in with the spoilers again…]

It was all going so well. And then the last five minutes came along and let me down. Don’t get me wrong, I don’t mind sending Hat Jr to bed reasonably certain she won’t have nightmares, but I’m so done with Clara-based paradoxes saving the day. (And, I could even suggest an alternative, benign, creature-based ending…)

Let’s start with the good, of which there is plenty. Having made us afraid of the dark (with the Vashta Nerada), statues (the Weeping Angels), small boys asking if we’re their mummy (the gas-mask zombies) and cracks in the wall, Steven Moffat has (inevitably) turned to monsters under the bed.

END_OF_DOCUMENT_TOKEN_TO_BE_REPLACED

Doctor Who (8.2): Of shrinks and shrinking 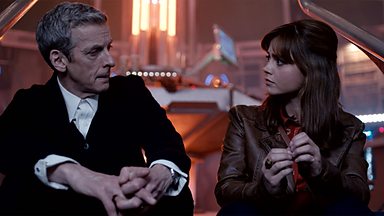 I wonder if Steven Moffat hates the Daleks as much as the Doctor does by now? They’re expected to make an appearance at least once a series, but finding new ways to present the psychopathic pepperpots must be something of a challenge.

Into the Dalek does find a new way to look at the old enemy – albeit one that combines elements of several previous stories, most notably the best Dalek story (in modern Who at least) – Robert Shearman’s stunning s1 episode Dalek and s6’s Let’s Kill Hitler.

It also questions, not for the first time, the Doctor’s morality. We’ve been here many times (for example, Davros goading Ten in The Stolen Earth/Journey’s End about how he turns his companions into soldiers and the numerous bodies he’s left in his wake), and we didn’t learn anything new in this outing. (I suspect we’re heading for a similar reckoning with the mysterious Missy further down the line though, so I’m not complaining. Yet.)

[Spoilers below the line…] END_OF_DOCUMENT_TOKEN_TO_BE_REPLACED

Tagged as doctor who, Into the Dalek, Jenna Coleman, Peter Capaldi, steven moffat

(As always, don’t read on if you don’t want spoilers)

Not because both wander round in their nightwear, or because the villain falls through London skies to his death in both debuts either.

“Don’t you think she looks tired?”

With six words the Doctor brought down Prime Minister Harriet Jones. And now I can’t help but think Steven Moffat’s scripts are looking tired too. And wonder if the brilliance of the new Doctor is going to increasingly show this up.

Introducing a new Doctor is a challenge and having the companion struggle to cope with the change is entirely reasonable way to deal with it, but Clara is still too annoying and not interesting enough for me to care that she doesn’t like the new man. He is, after all, Peter fucking Capaldi. Never less than mesmerising and with the bonus that he’s allowed to be properly Scottish. I just want to tell her to get a grip.

There were too many moments in Deep Breath when I knew where the gags and/or the story was going and, while Matt Smith’s brief appearance was a lovely, it was one of the few genuine surprises.

Enough of my grumbles though, let us focus on the good stuff.

I’ll be back for more, of course. Drawn by the charisma of Capaldi and in the constant hope that they’ll find a way to make me care about Clara. And with the difficult Doctor’s debut episode out of the way, things can only get better…

Doctor Who: The Time of the Doctor

All right then. We have at long last wrapped up all those dangling threads that have been hanging around since the Pandorica opened and the Doctor reset the universe. And we have said farewell to the wonderful Matt Smith. Regular readers of these sofa-based despatches will not be surprised to learn that I waterproofed the laptop before sitting down to watch Eleven’s swansong (and that it was just as well that I did).

After being bounced around inessential, but not irrelevant, scenes like a pinball – the now traditional Doctor Who opening – we find ourselves, inevitably, on Trenzalore. We learn at last who blew up the Tardis, why silence must fall (not to mention who the Silence are), what’s on the other side of the crack in the universe (and that it was the crack that the Doctor saw back in his hotel room The God Complex), and why the oldest question in the universe is Doctor who?