The Killing: Slow TV can be good – but not if it’s Midsomer Murders

Don’t ask me why I ended up watching Midsomer Murders last night. I managed about twenty minutes (to give Neil Dudgeon a fair chance) before I could bear it no longer and went off to read a book instead. But I was moved to put fingers to keyboard not by the race row that’s blown up around Midsomer’s Brian True-May, but by the startling contrast between Midsomer and my new favourite thing, The Killing.

Well, durr, you say, the two have nothing in common beyond both being crime fiction. But I’m looking beyond the subtitles, strong female lead, low body count (although it’s risen rapidly in the last few episodes). What strikes me is that both The Killing and Midsomer move at a pace so laid back they would have Jeremy Clarkson accusing them of being lentil-munching, sandal-wearing Grauniad readers, but one has all the tension of an episode of Cash in the Attic, while the other has been keeping me awake at night turning over countless theories as to whodunnit. 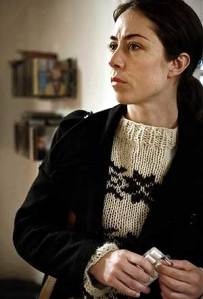 If you don’t know what The Killing is, I will attempt to condense 18 hours (yes, one story told in 20 hours, AMAZING, as Popjustice would say) without spoilering for those still catching up on iPlayer. Forbrydelsen (to give it its original Danish title, which actually means The Crime, fact fans) has followed the efforts of Faroe Isle jumper-wearing DI Sarah Lund as she tries to find the person responsible for raping and murdering teenager Nanna Birk-Larsen. It is set against (and within) the election campaign for mayor of Copenhagen and although it has plenty of dark warehouses for Lund to wander around in, there is no sexual tension with her partner DI Jan Meyer, car chases or sensationalism. Instead fans of The Killing are hooked on the small details that have emerged so tantalisingly over the past few weeks and wait with bated breath for the conclusion this weekend.

How can it be that two hours of subtitled Danish crime drama that reveals little of the detectives’ private lives and barely more of the unfolding story can zip past, while two hours in Midsomer drags by like some kind of cruel and unusual punishment?