Waterloo Road: Cesca and Jonah – the secret is out! 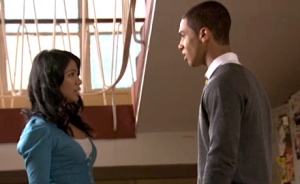 (Series 6, Ep.19) The thing with Jonah Kirby is, one minute he looks like quite a plausible boyfriend for a 20-something year old teacher (saving her from scary dogs, being a lovely shoulder to cry on after a hard day, being ever so supportive generally and a bit of a hunk). Then the next minute he’s kicking a football against the wall, or scrapping with his mates, and he’s just a seventeen year-old schoolboy again.

The Jonah/Cesca romance has been interesting in that it’s seemed to be a perfectly mutual, completely genuine thing – no coercion, no power games, just a mature young man and an immature older woman getting together against the odds. Proper Romeo and Juliet stuff. Except that we knew it couldn’t last, and we knew that Cesca was very much in the wrong in letting her heart rule her head and take her into a taboo relationship with someone who was supposed to be in her care. “No-one was hurt!” she protested to Karen after everything unravelled this week. On the contrary, Karen told her, Jonah has been hurt.

He only started to understand the extent of this in this episode, as he realised that taking his girlfriend on cosy camping trips with his dad and his sister is never likely to be an option. That he may never have the glittering career that everyone predicted for Waterloo Road’s star pupil as he has to leave school early and get a McJob to support his imminent offspring. Ronan told him that Cesca looks like a woman who appreciates the finer things in life and wouldn’t find life on the dole with Jonah all that attractive. Though PLA Jr pointed out that Cesca’s mobile phone is rubbish so maybe she’s willing to settle for reduced circumstances after all. 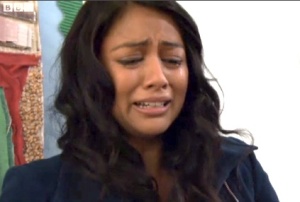 So, considering they’ve been ever so discreet and only ever had sex in cupboards and the art room in broad daylight, how did the secret romance become public knowledge? Well, it was mainly due to that famous lack of discretion, and Chris Mead having a diploma in body language. He can spot the difference between people discussing Spanish homework and a lovers’ tiff even through a fire door. Add this to Jonah’s odd behaviour generally, and Cesca’s shock resignation (she told Karen her father had had a heart attack and she was going back to Spain, when in fact she was bound for Gretna Green and a quickie wedding with Rochdale’s most eligible schoolboy). Chris got the final proof he needed when Cesca fell off a ladder and went to hospital for a check-up, and Chris pulled back the cubicle curtain to find her in a clinch with Jonah, and after that it was a short step to Jonah’s father and the police being called and Karen wearing her very best “I’m so disappointed in you” expression (though she always seems to be smiling at the same time, which undermines it somewhat). END_OF_DOCUMENT_TOKEN_TO_BE_REPLACED