There are many factors that contribute to my love of Orphan Black. There is that it is a mind-bending delight of drama meets science meets comedy; there is that it’s a feast for examining the fundamentals of nature vs nurture; there is that it’s a ride of twists and turns and because of the excitement of never really knowing who you can trust…but really, there is one immense feature of Orphan Black that makes me love it and it is absolutely unique to this show. I love it because every episode has a moment, a very special moment, and each time I watch I assume it will be the last time it happens – but it never is. It’s the moment where I shake my head and remember that the character on screen is being played Tatiana Maslany…and that that one is too…and that one. I rub my cheek and can’t understand how I fell for the illusion yet again, that I forgot yet again…but I do – and if experiences of friends and other commentators are anything to go by, I am not the only one. This may make little sense for those unfortunate enough to have not spun through the whirlwind of series 1&2, so let me explain.

It’s all about the clones.  END_OF_DOCUMENT_TOKEN_TO_BE_REPLACED

Friday Night Lights had been on my TV radar for a while; friends in America had raved about it, stars had been bolstered by it and numerous recaps for other shows had referenced it as a beacon for unrivalled character portrayal. I finally had my opportunity to settle down and give it the attention it deserved over Christmas. It is safe to say it surpassed my already high expectations.

For someone who loves nothing more than well written, grounded character development without the distraction of overly dramatic plots (for the most part), Friday Night Lights is the perfect show. The keystone of its quality is in the cuttingly realistic portrayal of its main protagonists – passionate and caring, but no-nonsense, high school football coach Eric Taylor and his level-headed, patient and committed wife Tami. This powerhouse couple come to life with the understated talents of Kyle Chandler (Argo, Zero Dark Thirty) and Connie Britton (Nashville, Spin City). Their chemistry and consistency is the driving force that maintains the heart and soul of the show even through changing circumstances and the rotation of the show’s repertoire of promising young talent.  END_OF_DOCUMENT_TOKEN_TO_BE_REPLACED

Filed under Drama, Joy of Sets

The Joy of Sets: Breaking Bad 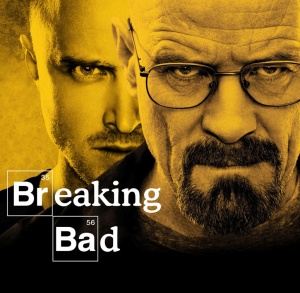 In the olden days, before th’internet, if you missed a show you missed it. If you missed a whole series, you missed that – or waited to hand over a large wedge of cash and stagger home with a hulking great pile of video cassettes, in a souvenir carton, if you were lucky. Thus it was that I never did get to watch The West Wing (seems too late to start now) and, yes, I do feel culturally impoverished as a result.

No such problems these days. I’ve belatedly realised that Twitter is full of something called Breaking Bad, which I was dimly aware of but only as far as connecting it with a picture of a man with a shaved head and glasses looking a bit menacing. It didn’t seem like my cup of tea, but Twitter will wear you down, particularly when people whose opinion you respect keep banging on about something like it’s the best thing since… well, The West Wing, probably.

So hurrah for Netflix! I had a little look last night, and it’s got five whole series of the thing on it! Obviously, this wouldn’t be great news at all if the show itself was actually a bit dull and I didn’t like the shaven-headed glasses man. So I watched the pilot and – I expect you know this already – it’s brilliant. From the opening scene of an RV being driven extremely recklessly by a man in a gas mask, while apparently dead bodies slip around the floor in the back, to the ending where Walter (not shaven headed yet) gets his sexual mojo back because even though he’s got terminal lung cancer, he’s also more alive than he’s been in years – it’s fantastic. It’s stylish and dramatic and has a sly humour. It’s got main characters I cared about (I almost cheered aloud when Walter sorted out the kids who were laughing at his disabled son). The greatest thing of all is that because everyone is still raving about it, I know it’s worth carrying on with it, and it’s not going to fizzle away like Heroes. That’s my viewing pleasure sorted for the foreseeable future (though I’ll be tense as hell now, trying to avoid spoilers).

Filed under Drama, Joy of Sets