Casualty: The Robin Hood of Holby 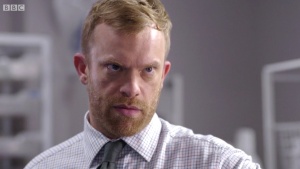 (Series 29, ep.20) Holby A&E was being inspected by a team of inspectors, including Dr Dylan Keogh. Despite having previously worked at the department and living on a boat with one of the staff, he is actually a robot so can be relied upon to be objective.

Nevertheless, it wasn’t a day when you’d want a reception area full of clowns and a staff member (Lofty) with a clown phobia. Not the day either for the department’s IT system to catastrophically fail.  END_OF_DOCUMENT_TOKEN_TO_BE_REPLACED