Holby City: When a pocket is a loaded gun

(Series 19, ep. 37 ‘For You May Be the Next to Die…‘ by Patrick Homes) The hour started with an unsettling, dreamlike scene of young Fran and young Jac, presumably in the terrible care home they lived in when they were kids. We saw Fran – geeky and awkward-looking – going to Jac (who was uncannily, recognisably Jac) for comfort. A horrible song full of nasty death imagery played over it.

Then, in the apparent safety of Holby, there was Jasmine, singing the same song to herself. It was one of Paula Burrows’ favourites, apparently. Even if we’d never heard of Paula before, I think we’d have quite a clue about her personality just from that detail. Morven thought the song was horrible, but Morven is still too close to losing Arthur for death to be an abstract notion to her. To Jasmine, a naturally optimistic, full-of-life person,  it was just a catchy tune.  END_OF_DOCUMENT_TOKEN_TO_BE_REPLACED

(Series 19, ep. 36 ‘For the Love of Maureen’ by Joe Ainsworth 13.6.17) The end of the episode saw Mo, Mr T and Hector drive off into the Holby sunset in Mo’s funny little pink car. It was a lovely happy-ever-after for them, and the whole episode was a beautiful send-off for Mo, who ever since her first heavily-pregnant appearance has been a wonderful warm, funny, feisty character. She got to say goodbye to all her Holby family in touching little one-to-one scenes and a funny party scene at the end. Chizzy Akudolu said on Twitter that her tears in her scene with Sacha were real, and there was genuine emotion also in a scene with Ric and a wonderful one with Jac, where Jac paid tribute to Mo as a black working class woman in a posh white man’s world. It’s not often you hear Jac Naylor’s voice break up, but it did at the end of that speech.  END_OF_DOCUMENT_TOKEN_TO_BE_REPLACED

(Series 19, ep. 35 ‘The Hard Way Home’ by Martin Jameson and Nick Fisher) Has it really been a year already? On this very day in 2016, Holby and the world lost Arthur Digby, husband, friend, doctor and all-round lovely man. The repercussions of that have lasted ever since, especially among those closest to him – Morven, Zosia and Dominic. Morven’s reactions have been more straightforward, and on the anniversary of his death we found her trying to work up the courage to face a memorial get-together, and sobbing her heart out on the stairs.

Dominic has had a torrid time of it in the last twelve months. After losing his best friend, he found himself in an abusive relationship with Isaac. His self esteem at an all-time low, he’s recently been taking to the gym like a man possessed and throwing back steroids. This has made him all angry and shouty, and this culminated in him getting rather nasty with Sacha in theatre. It reminded me of when Oliver Valentine turned on Elliot Hope after Tara’s death, because Sacha, like Elliot, is a delightful human being and beloved mentor, but also like Elliot he has his vulnerabilities and in some ways lays himself open to attack. Sacha doesn’t get cross very often, but I rather like it when he does, and he did.  END_OF_DOCUMENT_TOKEN_TO_BE_REPLACED 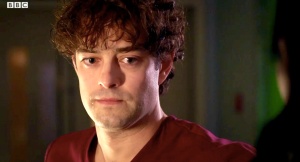 (Series 19, ep. 33 ‘Enigma’ by Peter Mattessi) It’s a rare staff member who doesn’t get surprised at the hospital by their secret past turning up at some time or another. Just look at Ric Griffin – and we will look at him a little later, the naughty man.

Lofty got his ‘secret past surprise’ very early in his Keller career, considering he only started last week. When a new patient, Lenny, arrived on the wards there were some meaningful looks exchanged between him and Lofty from the outset. They were “family friends” they said, but this hid a more complicated truth. Eventually Lofty admitted that he’d been engaged to Lenny’s sister, Alice, but jilted her at the altar. No wonder Lenny seemed angry. In fact, Lenny seemed very angry indeed. I really liked this character – he was a bit of a bad boy, an ex drug user, the kind of person who’ll break the rules to have a cigarette in the staff room, but loyal and in his way very charming. His sister, when she turned up, was also lovely and you could see why Lofty had been attracted to her. But the real attraction was Lenny. They’d had a little Moment at a Radiohead concert and it was enough to convince Lofty that he had no business getting married to Alice. He really loved her, but not the way he loved Lenny.  END_OF_DOCUMENT_TOKEN_TO_BE_REPLACED

(Series 19, ep. 32 ‘Project Aurous’ by Claire Miller) I loved Carli Norris when she was last on Holby as Fran, so it was very nice to see her back. Not so nice for Jac Naylor, though. Even though she’d promised to support Fran in that dramatic encounter on the roof, it was like one of those situations where you bump into an old acquaintance in the street, insist you really must meet up for coffee one day, and then spend the next few days hoping they won’t follow up on it. But now here was Fran, ready to call in that favour (to get Jac to help her prosecute the care home they used to live in), and with the added problem of having a super-complex heart condition that Jac was best placed to sort out. As if this wasn’t enough trouble for Holby’s snarkiest surgeon, she was also about to unleash a ground-breaking piece of research on an excited world. Hanssen had his eye on her.  END_OF_DOCUMENT_TOKEN_TO_BE_REPLACED

(Series 19, ep. 31 ‘The Heart Is a Small Thing’ by Sian Evans) Does Jac Naylor need to go to Specsavers, was the question troubling my mind while I was watching last night’s episode. Having previously seen a photograph of Matteo and Mrs Matteo’s wedding, when Mrs Matteo (whose actual character name is Nina Karnik) turned up, it took Jac an awfully long time to work out who it was. I suppose it’s always weird seeing people out of context.

Anyway, Nina was there with her friend/boyfriend Luke (Sagar IM Arya), who needed the kind of medical expertise only Jac Naylor can provide. Matteo made a big fuss and tried to ship him off to The Mythical St James’s, but Jac was having none of it. And eventually it came out that Nina and Matteo are married but estranged, and the estrangement was at least partly due to losing their son, Nico. I say “losing,” because Nico has been missing presumed drowned, and while Matteo has tried to accept this (by sealing himself off, “hermetically”), Nina still holds out hope he might one day be found.  END_OF_DOCUMENT_TOKEN_TO_BE_REPLACED

(Series 19, ep. 27) I always felt that the only possible satisfying conclusion of the Dominic/Isaac storyline would be for Dominic to find the strength to be the one to finally end it. I know that’s a very big ask for someone in an abusive relationship – Isaac has systematically undermined and isolated Dominic, making him doubt the reality of events and overlaying them with a twisted version (“That’s what grown-up love is… It’s scary”). Help was always going to be needed, and powerful help arrived this week in the form of Zosia, Essie, Sacha, Hanssen and Dominic’s old flame, Kyle (Alan Morrissey). With his gentle, loving, no-bullshit personality, Kyle was the perfect person to once again see through the fictions that Dominic creates. Hanssen said at the end that he regretted not acting sooner and more decisively, but actually his intervention was well-judged – he’d worked the situation out for himself but tried to empower Dominic to get help for himself.  END_OF_DOCUMENT_TOKEN_TO_BE_REPLACED