EastEnders: Someone please look at Linda

I bet I wasn’t the only person who spent last night’s EastEnders episode willing any member of the Carter family to just look at Linda. Properly look at her. She was practically catatonic – no makeup, still in her slippers, no trace of her usual sparkle and peppiness. “Mum’s hungover,” said the kids. “I need you with me today, L,” said Mick. To be fair to Mick, he was a tad distracted by the disappearance of his “sister” Shirley, who’d done a runner after shooting Phil Mitchell. “It’s not like she’s my mother,” he said to Dean. Oh, the dramatic irony. But Mick, who loves Linda to bits, still wasn’t looking at her. Not properly. Because if he was, he’d have seen that she was suffering and she needed him and she wanted him to just stop for a moment so she could tell him why.   END_OF_DOCUMENT_TOKEN_TO_BE_REPLACED

EastEnders: That dress is ruined 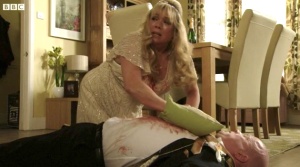 I’ve not seen a single positive comment about Sharon’s wedding dress. It turns out it’s just as well she didn’t waste her money on something stunning from the Vivienne Westwood Bridal Collection, because she’s only gone and ruined it by getting it covered in blood. It’s not even her blood, either. “Phil’s been shot,” someone said. “Not again,” said Ian Beale, who’s been there and done that himself so it doesn’t impress him much.

Ronnie, knowing that faaamily comes before first aid, legged it with the gun. It was her gun anyway and she didn’t need the extra aggro, what with being pregnant and that. She only got it as far as the safe haven of the Arches, where it was last seen in the capable hands of Ben and Jay. “Capable” as in “of anything.”   END_OF_DOCUMENT_TOKEN_TO_BE_REPLACED

EastEnders: The wedding ends with a bang

The gun which has been semi-concealed in a black and white checked bag for I don’t know how long has finally gone bang. When last seen it was in the trembling hands of Shirley, but there was a bit of a tussle for it between her, Phil and Sharon. The cameraman wisely got out of the way, so we were outside when the thing went off. Was anyone hurt? Tune in tonight etc.

Someone who was hurt, in a separate incident, was the Brannings’ dog. This dog is hardly ever seen, so when it appeared wagging its tail around the car that a drunk Abi was attempting to drive to Bolton on her own, it was no surprise that she didn’t get from “Mirror… signal…” to manoeuvre before there was a bang and a whimper. How hurt was the dog? Tune in tonight.

Abi wanted to get to Bolton in a hurry because Jay had just admitted he didn’t love her anymore and he loved Lola. Hence, he wouldn’t be joining Abi in Bolton after all. And he’s made her miss Freshers’ week as well.

Another person who’s decided to jog on (the Square is going to be empty soon at this rate) is Peter Beale. But why? And why did he ring policewoman Emma just after the wedding? Probably no point tuning in tonight on that one, because I doubt whether we’ll get those answers just yet.

Everyone loves a soap wedding. It’s the chance for all the cast members who aren’t on holiday and assorted non-speaking extras to don their finery and fascinators. It’s a time of romance, happiness, firearms and that moving moment when the vicar/registrar asks if anyone knows any lawful impediment and the embittered ex/drunk relative/etc gets shakily to their feet to deliver the killer blow (sometimes literally) – that is, if both the bride and groom have actually turned up in the first place.

The wedding of Sharon and Phil on EastEnders (or “Mr and Mrs Phil Mitchell,” as they are styling themselves, which sounds strangely old-fashioned to me) was never going to be uneventful. Even if they’d been on their own on a desert island those two could concoct some drama between them. Their speeches were all about trust and fresh starts, and we in the audience were quietly reminded that this might be a tricky proposition by Shirley (whom Phil “slept with” very recently) glaring at the newlyweds across the wedding breakfast of poshed-up cockles & whelks and pie & mash.   END_OF_DOCUMENT_TOKEN_TO_BE_REPLACED

Things were heating up in EastEnders last night. No, I’m not talking about that pesky fire but the prospect of Walford hunk Phil Mitchell stripping at his bride-to-be’s hen party.

Yes, believe it or not, the inexplicable Philip Mitchell aura had the ladies of the Queen Vic screaming for him to take his clothes off and reveal the perspiring joys beneath. However, while many ogling eyes were on an unimpressed Phil, there were no eyes on Sharon, who hadn’t turned up to her own hen night.

Sharon was over on the staircase at the stag party, not because of gender confusion but because she needed to confide in someone that she was getting colder feet than a nervous penguin. Of course, her confidante was none other than everyone’s good pal, Danny Dyer, who gave her the pep talk of her life.

Mick was a do-gooder in demand too, as he also had to contend with talking Alfie out of his foolproof plan of torching his own home. Turned out it was a little late for that, and the living room was already engulfed in flames as an oblivious Kat snoozed upstairs. With Kat’s level of make-up and aerosols both on her body and off, it was inevitable that the whole place would explode, and, when it did, Alfie’s tortured agony at the thought he had killed his own wife was played hauntingly well by Shane Richie.   END_OF_DOCUMENT_TOKEN_TO_BE_REPLACED

EastEnders and Coronation Street preview: What a blast!

WARNING: This article contains SPOILERS. Please do not read further if you prefer to avoid them.

The aroma of plump sausages sizzling on the barbie, the feel of sand trickling between your toes (and the crunch of it in your sandwiches) and the blazing heat of the one solitary warm day we had are all distant memories. Our thoughts are turning from foreign holidays and ice bucket challenges to how we are going to occupy the slowly darkening evenings.

Cue the ambitious soap producer, determined to reel their temporarily errant, sun worshipping fans back in with an action packed autumn of drama. And Coronation Street and EastEnders are both really going for it this year.   END_OF_DOCUMENT_TOKEN_TO_BE_REPLACED