Sherlock: A Scandal in Belgravia

The return of the telly (as opposed to the Robert Downey Jnr film) version of Sherlock had been hugely anticipated after the triumphantly brilliant trio of episodes a year ago. And A Scandal in Belgravia did not disappoint. Forgive me, I have to say it, it was a spanking good episode. Whipsmart in fact. Slightly more by way of raunchy undergarments and methods of restraint than I’d bargained for at 8.10pm on a Sunday evening, watching, as I was, with a nine year old, but it sparkled with fun and mischief from start to finish. Some possibly dodgy sexual politics too, more of which later, but I’d be lying if I said I didn’t thoroughly enjoy it.

And then we’re off, with so much to enjoy. Much playing with modern culture in a droll, witty way. Best use of a text alert ever. And Watson is writing a blog about cases, including a man dying mysteriously by a loch (the blog ‘exists’, you can see it here). The rapidly increasing number of blog fans leads to Holmes trying to hide his face from fans trying to take his picture as he leaves a theatre – grabbing a random hat from the props box. A Deerstalker, of course. And there’s a ‘real’ Twitter account for Irene’s dominatrix business (@TheWhipHand).

END_OF_DOCUMENT_TOKEN_TO_BE_REPLACED 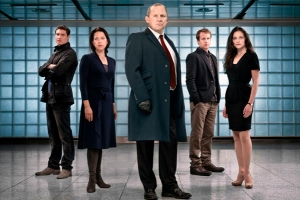 First things first. Do not read this if you haven’t already watched every second of the final (sobs) episode of Spooks. Despite my best efforts I had a thing near the end spoilered in the week and  the emotional punch was weakened as a result. (It still made me cry even harder than I already was though.)

Alright then. Into the valley of death and the vale of tears we go…

END_OF_DOCUMENT_TOKEN_TO_BE_REPLACED 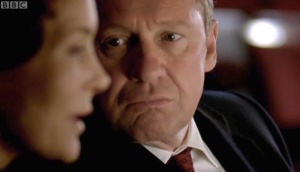 In other words, a top notch Spooks episode (and please don’t read any further if you haven’t seen it yet). It started with Calum (I still don’t trust him) having a laptop stolen. Despite Tariq’s genius with encryption, it didn’t take the thieves long to start opening the files, and popping the contents on to the internet. The contents being names of some of MI5’s top assets, this was bad news indeed. Asset number one was killed before Dmitri could get to him, and Dmitri was given the task of making the murder scene look like a suicide. He went at this with scary efficiency, though he did have the grace to look troubled by the task.  END_OF_DOCUMENT_TOKEN_TO_BE_REPLACED

Spooks: In one particularly dark moment, I actually considered gardening

(Series 10, Ep.1) In the post Lucas North era, it’s clear that this final series of Spooks is going to focus on Harry Pearce. This is only right and proper – having made it through nine whole seasons, watching his colleagues dropping like flies in varied and nasty ways, he deserves to take centre stage. 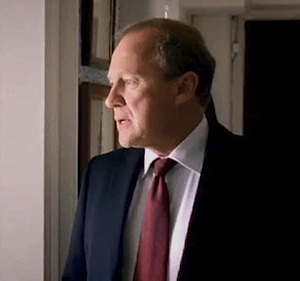 He’s currently on probation. Having sailed rather close to the wind with the whole Albany/Lucas North business, he’s not entirely trusted by the Powers That Be. They might not trust him, but they do need him, so he’s sent back to the Grid on the strict understanding that an eye is being kept on him, he is not to put a foot wrong, and other body-part metaphors.

While he’s been away, his seat has been kept warm by one Erin Watts (Lara Pulver). I say “warm,” but Lara is one of the ice cold type of females that Section D routinely employs, all cheekbones and stiff upper lip. Dmitri thinks he knows the type. She’ll be going home to a solo dinner of steamed fish and an evening of ab crunches, he predicts. He’s wrong, though – when she goes home we find she’s the single parent of an adorable little daughter. Clearly Lara isn’t as ice cold as we thought, and presumably her mummyhood will be upsettingly exploited later in the series.
END_OF_DOCUMENT_TOKEN_TO_BE_REPLACED