Casualty: You had one shot

(Series 31, ep. 44 ‘One’ by Paul Unwin) The word that was going through my mind as I watched this one-shot, real-time episode of Casualty was “choreography.” The way the camera moved fluidly around the different parts of the set, at one point even being lowered from the first floor down to the ground and then moving seamlessly on, was nothing short of incredible. Actors would walk into shot, deliver their lines and then the camera would be following somebody else, taking up some other part of the story. Apparently the crew were all in costume in case they happened to appear in any shot, but if they did I certainly didn’t notice them – everyone in the background seemed to be doing the usual doctor-stuff, nurse-stuff and patient-stuff, as always. I didn’t see a mis-step or a thing out of place.

The whole thing had been brilliantly thought out by the writer, Paul Unwin, and the director, Jon Sen, so that the episode had dynamics and pace. The actors all made it look easy, and it was testament to them that after a while I started to forget the “one-shot” aspect of it and got swept into the story. I actually felt a bit emotional by the end, with Jez’s scene with the father of the baby who died in the fire, and then with Duffy’s voice-over. I know that last bit was a tad cheesy, but if such a special episode couldn’t be used as a love letter to the NHS it would have been a missed opportunity.

(Series 19, ep. 34 ‘Twist of the Knife’ by Jon Sen) Of course we know that Mo wouldn’t ever harm her baby. She’s a doctor, for one thing, and she’s Mo, for another thing. Mo just wouldn’t do anything like that. And yet she almost persuaded herself that she could have hurt him, and she did it so well that she almost persuaded me. Mr T was already thinking she might have (and that’s what got Mo to doubting herself in the first place).  END_OF_DOCUMENT_TOKEN_TO_BE_REPLACED

(Series 31, ep. 32) Rebecca Ryan, who plays Iain’s sister Gem, was previously in Waterloo Road. Anyone who watched Waterloo Road for more than a few episodes will know that what pissed-off and pissed-up teenagers tend to do is drive stolen cars in circles around car parks. It happened so often in Waterloo Road that it became A Thing. And it seems that Waterloo Road’s effects rub off on its cast members. Tom Chambers is currently reprising his role as head teacher Max Tyler (while reprising his role as Mister Strachan), and Rebecca Ryan is still being a disgruntled and misunderstood teenager (or early twenties, possibly).  END_OF_DOCUMENT_TOKEN_TO_BE_REPLACED

(Series 30, ep.9) I’m sorry, but I can’t take Jacob Masters seriously. Recovering from a recent gunshot wound, he was taking it easy with a spot of extreme swimming and running. Maybe we’re all supposed to follow Connie’s lead and feel a bit of a swoon coming on every time his enormous pecs heave into view, but… Well, you already know my idea of a Real Man is someone more on the Ethan Hardy end of the spectrum.

Speaking of whom, he and Cal seemed to be having a lovely time playing Two Men And A Baby with little Matilda (or “Toad,” as Cal calls her). They’ve got feeding, nappy changing and bath times off to a fine art, bless them. There’s going to be tears if/when Cal finds out she’s not biologically his, or Taylor decides she wants her back.

Meanwhile, Dr Lily Chao was struggling to maintain her professional poise following her father’s death, and Dixie enjoyed winding Iain up when she found out about him and Rita. Oh – and Max almost moved to Birmingham but then didn’t. Zax fans, I think there might be a glimmer of hope.

(Series 29 ep.35) In the world of Holby/Casualty, if you’re an unpopular person trying to be liked, you bring cupcakes for the team. If you’re a serious try-hard (Sahira Shah, Lilah Birdwood) you bake them yourself.

I doubt whether Connie Beauchamp spends her evenings glued to The Great British Bake-Off, so her cupcakes were very much shop bought (and not from Greggs, either, I’m willing to bet). Still, it was going to take more than that and a staff pep talk – after which Lofty remarked, “I still wouldn’t trust her with my grandad, though.”

Connie tried to hide in her office a bit, and it took Rita, of all people, to coax her out. “You need to lead,” Rita told her. Later on in the episode Rita rather impressively kneed a nasty man in the knackers, so it was a good episode all round for her. Much more effective than cupcakes.  END_OF_DOCUMENT_TOKEN_TO_BE_REPLACED

(Series 17, ep.21) This was the episode when Dr Harry Tressler-Posh finally realised that he was in love with the radiant Mary-Claire Carter, and decided to tell her. It was either that or watch her swan off into the Australian sunset with Helicopter Tom. Mary-Claire assured Harry that Australia was only a work arrangement and she and H-Tom weren’t an item. Anyway, “You’re the one who told me I deserved the best,” she reasoned. “Yes,” he reasoned back. “I meant me.” Bless him – modesty still intact even in the face of imminent heartbreak. Mind you, if he’d known how the day was going to turn out, he might have agreed to accept “imminent heartbreak” as a less painful alternative.  END_OF_DOCUMENT_TOKEN_TO_BE_REPLACED

(Series 16, ep. 52) These Holby wet labs are entirely unregulated. If you want to appropriate one for your own personal use and stick post it notes all over it and have a prog rock freak-out, then go ahead. That’s what it’s there for, and that’s where Dr Digby found Zosia, full of manic energy and having worked out the secret to something or other that will surely see her as cover star of the Lancet sometime soon. If they have cover stars.   END_OF_DOCUMENT_TOKEN_TO_BE_REPLACED 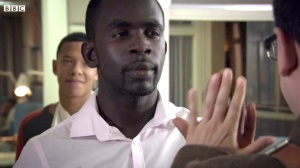 (Series 16, ep.7)  It was Malick’s farewell episode, and didn’t we just know it? He was given maximum opportunity to do all the classic Malick things – rush around going “Grrr,” shout at Digby, have an almighty strop, mess up a bit of surgery and try to worm out of it, and wrestle with his conscience about what kind of father he was to Jake. The only typical Malick thing that he didn’t get to do was have a steamy encounter in the locker room, but there was hardly time for any of that nonsense because he was so busy elsewhere.

It was actually all rather magnificent (apart from the sloppy one-handed chest drain incident – what happened to the standard cry of “We need some help in here”? And surely there’s a call button in the CT scanner room?). Since he damaged his hand, Malick has (understandably) been a tad immersed in self-pity, which has at times been fairly tedious to watch. By the end of this episode he’d recovered his mojo, but incorporated a few life lessons into it and become a humbler and wiser man. He’s The Malick again, but he’s Malick 2.0 – teacher, mentor, father. Ego restored and off to Sweden with his son and a James Brown soundtrack.   END_OF_DOCUMENT_TOKEN_TO_BE_REPLACED

(Series 15, ep.33)  I’m extremely sorry for the lateness of this post. I’ve been moving house – traumatic in itself – but no sooner had we started to unpack the boxes than the hideous truth dawned. We have broadband speeds of dial-up levels and the TV aerial is not working (I have no mobile phone coverage either). Though I’m still living in London and am only half a mile from my previous address, it feels like I’m living in the past.

So this episode of Holby has been watched on iPlayer in bite-sized chunks at off-peak times and I hope you’ll forgive me if the quality isn’t quite what you’d hope for. 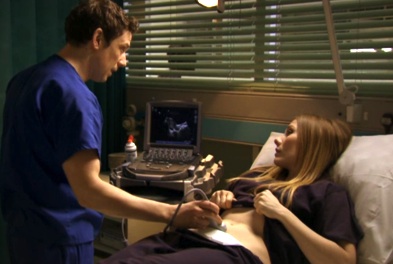 To cheer myself up (did I mention I’ve also done my back in lifting heavy boxes and am sitting here wishing Camoxidan wasn’t fictional?), let’s start with Jac Naylor, Jonny Mac and the baby who shall henceforth be known as Jaccy Maccy Jr. There was the loveliest scene since the scene where he was stitching up a cut on her forehead (he did a great job on that, btw – no scar visible at all), when he gave her a wee ultrasound and they saw the baby for the first time. Jac gave one of her trademark looks – one of those that only lasts for seconds but says so much. Just in case the moment threatened to get too emotional, Jonny printed out a picture and she suggested he stick it on the his fridge at home, knowing how much he loved a cliche. The banter between Jac and Jonny was brilliant throughout the episode. I particularly loved it when they almost had a bonding moment on the Walkway of Wisdom and he put his arm around her shoulders as they walked away from the camera. How heartwarming, I thought, that she lets him be so familiar.  “Don’t touch me!” she snarled.

Chrissie was feeling a bit like that re Sacha, only in their case it was “Don’t touch Daniel!” The fruit of her womb turns out to be a bone marrow match for Sacha’s daughter, which would be lovely if only Sacha hadn’t tried to have him tested without telling her. Understandably, she wasn’t keen on wee Daniel having painful and possibly risky procedures, even if it meant a chance for Rachel to recover from her leukaemia. I did actually sympathise with Chrissie, who really only wanted to be consulted and feel part of the decision making, rather than being presented with a decision after it had been made.

Malick was suffering from the ramifications of his decision to let Amanda Layton die, and having a fling with Doting Dominic afterwards. Basically, Malick has been suspended and that might be the least of his troubles, as Doting Dominic may be about to go a little bit bunny boilerish after seeing Malick heading off home with Nathan.