Downton Abbey: Everything seems to be hitting the rocks

(Series 5, ep.8)  The episode featured a wedding, and who doesn’t love a wedding? Well, the bride’s mother and the groom’s father, for two, but that just added to the fun and made for an extremely awkward dinner party at the Crawleys’ London residence, as the families of Rose and Atticus apparently competed as to who could be the most offensive. I think Rose’s mother, Mrs Shrimpy (soon to be ex-Mrs Shrimpy) won that particular contest. The wedding itself was a tad low-key, though, but I suppose they hadn’t had long to arrange it because the happy couple only got engaged last week.

Thomas is now fully recovered from the side effects of his “gay cure” and had enough energy to join forces with temporary footman Andy in getting one over on Lady Violet’s scheming maid Denker.  This involved a visit to ‘The Velvet Violin,’ which sounds more like a euphemism than a gambling den.  END_OF_DOCUMENT_TOKEN_TO_BE_REPLACED

Comments Off on Downton Abbey: Everything seems to be hitting the rocks

(Series 4, ep.8)  Series four glided to a halt so sedately it might have been a car driven by Tom Branson himself. Some loose ends were tied, but enough of them remained loose to leave us counting the days till the Christmas episode and the new series.

If you haven’t seen the episode yet and don’t want to see any spoilers – turn away now!   END_OF_DOCUMENT_TOKEN_TO_BE_REPLACED

Comments Off on Downton Abbey: Fete, fatal attractions and fatalities 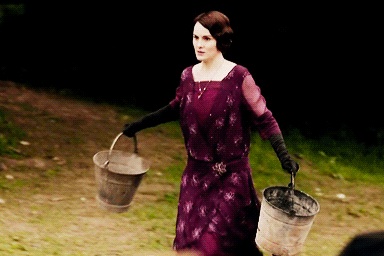 (Series 4, ep.7) Lord Grantham had to go to America to sort out some situation involving Lady Cora’s family, so obviously he had to have his valet with him. In those days apparently Americans demanded a different outfit practically on an hourly basis, so it was unthinkable not to have your best chap there to fasten your cufflinks.

Mrs Hughes knew that Anna wouldn’t be able to cope without Mr Bates, so she persuaded Lady Mary to persuade Lord G to take Thomas instead. I wouldn’t have taken any persuading at all – I should think Thomas would be a lot more fun on a long voyage than tedious Mr Bates. Anyway, it all means that Lady Mary now knows that Anna was attacked, but not who did it.

Mrs Hughes knows who did it, and when Evil Mr Green turned up at Downton, Mrs Hughes made sure he knew she knew. I think Mr Bates also knows now, because he was observing the way Anna reacted in Green’s presence. If I was Green, I think I’d be more scared of Mrs Hughes.

The Dowager had a touch of bronchitis this week and spent most of the episode in bed being looked after by Mrs Crawley, who sat selflessly by the bedside for 48 hours. She does miss her nursing days, does Mrs Crawley. She’s never happier than when she’s got something worthy and practical to do. The Dowager finds all this very irritating, but the pair of them are a lovely double act.   END_OF_DOCUMENT_TOKEN_TO_BE_REPLACED

Comments Off on Downton Abbey: Rapidly filling up with Mary’s admirers

Downton Abbey: Lucky for some, not so lucky for others 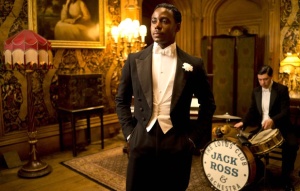 (Series 4, ep.6) As social commentary Downton might not be the most detailed or nuanced thing, or 100% historically accurate and so on, but it’s not a documentary, it’s a Sunday night chocolate box of an entertainment. It succeeds at this brilliantly, but it manages to make some serious points too.

I wasn’t sure what to make of the episode in which Anna was raped, and I said at the time I wanted to wait until the ensuing events put it in a context to decide how I felt. The context has now settled firmly into place, and I have to say I now think the storyline is being extremely well handled (and acted by Joanne Froggatt, who is amazing). There is obviously a part of it which is about the feeling of Mr Bates that his wife has been violated and it’s up to him to seek revenge – that might well come to a head next week when the offending valet, Green, is due for another appearance at Downton. But it’s been much more about Anna’s personal feelings and how she’s tried to move on from the incident, but finds it still takes over every part of her life. What I really hope for Anna is that she somehow manages to take some of the power back for herself and Green will get his comeuppance from Anna rather than her husband. She may have an ally in Ivy, who found that Jimmy expected more than just a kiss in return for taking her to see a film (though he wasn’t threatening and he did take no for an answer).   END_OF_DOCUMENT_TOKEN_TO_BE_REPLACED

Downton Abbey: In a spin below stairs

(Series 4, ep.5)  I’d like to start with a small complaint, if anybody from Downton HQ is reading. At the end of this most recent episode, I felt seasick.  For some reason, while a fixed camera is used for “upstairs,” offering a calm and clear-eyed gaze at Lady Mary, the Dowager and the other aristocratic folks, someone has decided that a hand-held camera is the way to go for the servants. Is this some bold stylistic choice, to make us feel how tenuous was the grip on life of the average servant? Or is it because the sets have been built too small to get proper cameras into them? Either way, in a couple of scenes the camera work was so wobbly that Mr Carson’s face was going round and round in small circles. I’ve made a mental note to myself to sit much further away from the television next week.

To the episode itself, then, and it turns out that Anna was right not to tell Mr Bates about her rape. Parking his bum and his walking stick in Mrs Hughes’ parlour, he mildly threatened her that he would leave Downton without even saying goodbye to Anna if she didn’t tell him what was going on. So Mrs H tried to tell him a random stranger had popped through the window on the night of the house party and done the foul deed. Mr Bates wasn’t having that. “It was Lord Gillingham’s valet, wasn’t it?” he said, with the detecting skills and tenacity of Poirot. Mrs Hughes said it was not. She even swore on her mother’s grave.   END_OF_DOCUMENT_TOKEN_TO_BE_REPLACED

Yes, she is real

(Series 4, ep.4)  After last week’s nasty rape left viewers feeling a bit grubby and upset, this week Downton was mostly back to romance, glamour and froth.

Mary, in particular, wore some absolutely gorgeous dresses. It’s no wonder Lord Gillingham was smitten. Not just smitten – Mary is all he can think about and he wants to spend the rest of his life with her and her wonderfully expressive eyebrows.

Mary’s mind, however, is still full of Matthew and that’s how she wants it to stay for now, so she turned him down. Since Gillingham already had a Miss Lane-Fox lined up as a fiancee, Mary is now wondering whether she’s made a rash decision.

Having Gillingham around meant that his valet, Evil Mr Green, was also lurking for part of the episode. This wasn’t pleasant for Anna, since Mr Green is, of course, the man who raped her. Everyone kept asking if Anna was alright – Lord and Lady Grantham, Carson, and particularly her husband Mr Bates. Anna couldn’t bear Mr Bates to touch her, so she’s asked if she can move back into the house for now so she doesn’t have to risk “wifely duties.” Joanne Froggatt’s portrayal of Anna’s pain, fear and dignity was understated and convincing.

Mrs Hughes is the only person who knows Anna’s secret. Mrs Hughes is the secret-keeper for a lot of people on Downton, because she’s kind and trustworthy, if a tiny bit scary. The way she sorted out Edna when she tried to blackmail Tom Branson into marrying her this week was a case in point. If only Mrs Hughes could find a way to scare Mr Green the way she scared Edna, Anna’s life would be slightly easier.

Meanwhile, Rose met a handsome, if slightly camp, jazz singer, but she wasn’t the most shockingly-behaved person of the week. We have to award that accolade to Lady Edith, who was seen by her aunt’s maid tiptoeing up the stairs barefoot in the wee small hours, having presumably been with her soon-to-be-German boyfriend. Lady Rosamund was not amused. 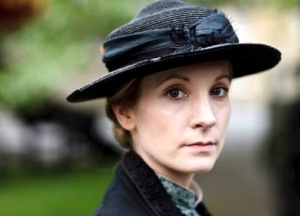 (Series 4, ep.3)  ITV didn’t send out any preview DVDs to the press for this episode, prompting speculation that Something Big was going to happen. On the previous occasions when they apparently didn’t send out previews, we lost Lady Sybil and Matthew Crawley in shock episodes.

My money was on Mrs Patmore shuffling off the mortal coil  mid-dinner service. It’s true that she did take a bit of a funny turn, but it turned out to be a red herring of a panic attack and she will live to bake pie another day.

In a house full of new people, frankly anything could have happened. Even Dame Kiri Te Kanawa turned up, as Dame Nellie Melba. Having an opera singer in the house was almost too much for His Lordship, who didn’t think it was quite seemly to have the world famous chanteuse eating at his dinner table and ordered a tray to be sent up. Her Ladyship is made of more modern stock (she’s American), so she overturned his tray plan and insisted that Dame Nellie would sit next to him at dinner and they darn well would make small talk, so there.

Also at the dinner party was Lord Gillingham, a potential new love interest for Mary. Edith brought her married boyfriend, who proceeded to ingratiate himself with Lord G by winning all his money back from a card shark. And there was a nasty visiting servant Green, played by Nigel Harman.

And he was the source of the expected shock. He didn’t die – there weren’t any deaths apart from a further nail in the coffin of Molesley’s self respect when he went from road mender to delivery boy to footman in the space of one episode. What Green did was actually worse – he raped The Sainted Anna.

The actual rape wasn’t shown, though we saw him hit her and drag her into a room. What was most distressing was her reaction afterwards, as she begged Mrs Hughes not to tell anybody, in case Bates tried to take revenge and ended up in prison with a death sentence over him. Joanne Froggatt was excellent, showing Anna trying to put on her usual calm facade as if nothing had happened, but  letting us see how traumatised she was.

It really was a shocking incident and I find myself completely unable to decide whether I thought it was gratuitous and a bit exploitative. I think I’ll have to wait and see how the aftermath unfolds in coming episodes. What I do know is that this is one episode that didn’t leave me with a happy, satisfied smile on my face.