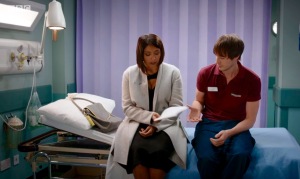 (Series 32, ep. 20 by Matthew Barry and Kelly Jones 13.1.18) If there was one thing that was going to tempt me back to Casualty after not watching it for I don’t know how long, it was the promise of seeing Dr Zoe Hanna again.

And there she was in all her magnificence, scrunching a ciggie out with her unfeasibly high, unfeasibly pointy shoe and slathering herself in Chanel No. 5. Max smelled her before he saw her – the cigarettes and Chanel combo that he knows and loves.

But did he love it, or even love her? He made every effort during the episode to pretend he didn’t, and even went so far as to lend her a pen so she could sign their divorce papers.  END_OF_DOCUMENT_TOKEN_TO_BE_REPLACED

Casualty: Connie behind the camera

(Series 31, ep. 9) This episode was directed by Amanda Mealing, though I don’t know how much that had to do with me enjoying it more than I’ve enjoyed Casualty for a while.

The focus was on the characters I like – Dylan was once again rather marvellous as he found himself drawn in to supporting Robyn while she pondered life-altering choices, and Robyn is just so sweet and sad. David and Max added some excellent comedy value as they bombed around in a bizarre little vehicle (is that Robyn’s?) trying to find Glen.

The patient stories were also interesting – I liked the man who was a friend of Glen, and that he was able to reassure Robyn that Glen really did love her. The other patient was a pretend zombie, whose chief purpose seemed to be so that the girl he liked, who was a total miserable whinge-bag, would be able to persuade Ethan that he wasn’t worth the affections of the radiant Alicia. This almost made me throw the remote control at the TV, because it’s obvious Alicia likes him and he likes her, but he keeps letting Cal get in the way and it’s getting tedious.

Because Connie was behind the camera, she was too busy to appear on screen and instead sent a text to everyone to let them know that Grace is awake. But did I hear a hint from Elle that Jacob may have strayed a bit while Connie has been keeping vigil at the bedside? I don’t actually care, to be honest, though “Jonnie” fans may well have spent a sleepless night on Saturday.

(Series 31, ep. 5) David Hide is one of the more interesting characters on Casualty at the moment. He’s a bit of an oddball, quiet and quirky, somewhat guarded and closed-off.

This week his back story became the front story, when we met his estranged wife (Lorraine Pilkington) and his son, Oliver (Harry Collett). I forget exactly how old Oliver was, but he was definitely too young to be driving a car. He did it rather well, though. It turns out that David is bipolar and his son probably is, too. They were both up on the roof shouting about it, anyway. Oliver’s mum reckoned that David had once tried to kidnap Oliver, but I don’t expect she meant he was doing it for a ransom. He seems too nice for that sort of thing.  END_OF_DOCUMENT_TOKEN_TO_BE_REPLACED

(Series 30, ep. 39) Once again, Duffy is back in Holby ED. And, once again, she neglected to tell her oldest and bestest friend Charlie Fairhead that she was back, but as soon as they clapped eyes on each other they went all warm and wistful. Actually, every time nobody was looking apart from we viewers at home, Duffy was looking a little worried. What problems have pursued her from New Zealand only time will tell.

I’m not actually a huge Duffy fan. Cathy Shipton is an excellent actress, but as a character I’ve always found Duffy’s saintliness a bit much. The way she sat with a man who thought he was about to lose his second child but instead lost his wife would have totally creeped me out – she’s just too intense. And she keeps gazing radiantly about her, telling everyone how special Holby is.  END_OF_DOCUMENT_TOKEN_TO_BE_REPLACED

(Series 30, ep. 34) I can’t even start to describe how much I’m going to miss Dr Zoe Hanna. She’s been my favourite Casualty character for as long as I remember, and not usually because of her medical skills (though she was brilliant at her job).

It’s Zoe’s sometimes questionable life choices that we’ll remember her for – staying up all night partying and getting involved with unsuitable men, waking up with a hangover and sucking the life out of a ciggie in the hospital car park while she suffered flashbacks of what might have happened the night before. It was her default setting and one she reverted to whenever life threatened to get too settled and sensible.  END_OF_DOCUMENT_TOKEN_TO_BE_REPLACED

Casualty: The one with the spider(s)

(Series 30, ep. 33) For one reason and another it’s been quite a few weeks since I watched Casualty. I don’t know whether the fact that I picked up the thread fairly easily means that not much has been happening, or just that this episode happened to focus on things I already knew about.

It was all neatly encapsulated by Max: “Some poor woman’s pinned up against a wall and a massive spider’s bitten a lorry driver.” “Only in Holby,” said Zoe.  END_OF_DOCUMENT_TOKEN_TO_BE_REPLACED

Casualty: Stop the plane, I want to get off

(Series 30, ep. 24) My opinion about Sam Strachan has completely changed from last week, when I described him as an “arrogant twonk.” The phrase I would use now is “complete tit.” Whereas Jacob Masters has now achieved the status of The World’s Most Perfect Boyfriend, if you ignore the fact that he calls Connie “sweet cheeks.”  END_OF_DOCUMENT_TOKEN_TO_BE_REPLACED

(Series 30, ep. 23) I was never really a fan of Sam Strachan when he was on Holby. To me he was just the junior heart surgeon who wasn’t Joseph Byrne, and very much a character I could take or leave.

Connie Beauchamp was quite fond of him at one stage, though, enough for him to be the father of her daughter Grace. This episode saw Sam’s girlfriend being rushed to Holby A&E in need of emergency life-saving surgery. Grace was with her, and Sam wasn’t far behind. Time hasn’t improved him – in fact, quite the reverse. He’s now an arrogant twonk, even allowing for the fact that he was worried about his girlfriend. In fact he was so horrible that Jacob Masters began to look so much more appealing in comparison. Connie told Jacob that Sam had excellent genes, which only goes to show that Connie has very poor taste.  END_OF_DOCUMENT_TOKEN_TO_BE_REPLACED

Casualty: A gin-in-a-tin kind of day

(Series 30, ep. 19) The Mythical St James’s called a black alert, which meant they were swamped with the kind of patients who don’t have an interesting back-story and are therefore of no use at Holby. The mythical doors were firmly closed to all accidents and emergencies, so everyone was routed to Holby City Hospital instead. Despite going almost code black themselves, Holby are made of sterner stuff than St James’s (obvs) and it wasn’t long before Lofty was proving his promotional credentials by helping to set up and run a big triage tent in the car park.

The triage tent was Connie’s idea, and she had to push it past Henrik Hanssen, who was in the department to add his own blend of glamour and terror to Lofty’s interview and the rest of the proceedings.  END_OF_DOCUMENT_TOKEN_TO_BE_REPLACED 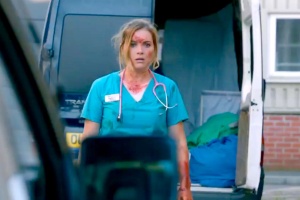 (Series 30, ep.11) Is this the last we’ll be seeing of Dr Perky Pinky Hair? Was she only temporary? I ask this because at the end of last night’s episode she was emailing her resignation to Connie. Emailing! Time was when only a proper paper letter in a proper paper envelope would do, but these are the times we’re living in.

The reason for her resignation was that she felt she’d been bullied by Dr Lily Chao. Well, I know Dr Chao can be a bit of a Cao, but compared to Jac Naylor she’s a pussycat. Plus she has mitigating circumstances in the form of grieving about her late father and trying to choose a nice headstone for his grave.

Alicia demonstrated her brilliance at doctoring (nice work with the improvised chest drain in the back of a van while an angry vengeful man is trying to bash his way in to finish the job he started), but the thing that annoys Lily is that Alicia also feels the need to demonstrate her tip-top people skills regularly, rather than sticking to the job at hand. I can see her point, really. The doctors should get on with the doctoring and leave the touchy-feely stuff to Lofty. 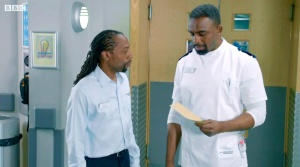 Meanwhile, Jacob received a letter containing the name of the police officer who shot him. Rather than an email, this one was a proper paper letter in a proper paper envelope. This was so Connie could catch him about to open it and persuade him that to do so would have career- and liberty-threatening consequences. I like it when Connie gets all cross and talks through her front teeth while her back teeth remain firmly clenched. You know she means business, and it makes a change from going all simpery and silly whenever Jacob is in view.

And Dr Zoe Hanna decided that Max really wasn’t going to change his mind about being Mr Zoe Hanna, and took her wedding ring off. She didn’t throw it into a nearby bin like Jacob did with his letter, though, so there’s hope.

Next time: Cal “faces every parent’s nightmare.” Back to back episodes of Thomas the Tank Engine! (Or is that just me?).