HIM: The lad with no name

HIM is a “domestic horror drama,” for those who like their genres mixed.

HE is, at first sight, your average antisocial, slightly messed up, weed-smoking teenager, forever staring at his phone or shut away with his headphones on. I’m going to have to refer to HIM as HE, because for some reason the writer (Paula Milne) has decided not to give HIM a name. This makes interactions with HIS family somewhat tricky – have you ever heard a parent give a kid a good telling off without mentioning their name at least once?

The set up is that HE (Fionn Whitehead, who is excellent) is the son of divorced parents (James Murray and Katherine Kelly), who have both moved on, found new partners and produced new children. HE has found HIMself pushed out, particularly by HIS father (nobody plays an arrogant twonk quite as beautifully as James Murray, and he’s a surgeon in this one – Holby City casting people, please make a note), whose house is full of studio-produced photographs of his “new” family – a wife who would rather ignore the fact that her husband has another family, plus their son and twins on the way.  END_OF_DOCUMENT_TOKEN_TO_BE_REPLACED

When you hear the words ‘boot camp’ you envisage bloodied, muddied, exhausted bodies staggering to a finish line. Something at the very least to stretch you. Back in the halcyon days of  X Factor, when Simon still had passing acquaintance with a razor and Sharon looked older than she does now, I seem to remember they did about three challenges; numbers being whittled down painfully and agonisingly before the weary survivors learned their fate on a grand stage reminiscent of A Chorus Line. Now they had a right royal knees-up on Friday night on Cowell’s dollar, then the next day performed one song that they chose from a wide selection.  END_OF_DOCUMENT_TOKEN_TO_BE_REPLACED

Comments Off on The X Factor: Xtinct-Factor boot camp

I was in two minds as to whether to watch ‘The Durrells’. I read ‘My Family and Other Animals’ for the first time when I was about eleven and regard it as an exceptional work, parts of it still reduce me to helpless laughter. Like meeting your heroes, a misjudged adaptation can sour the original, especially if it’s on ITV, which recently gave us the mangled Dr Thorne.

Happily I can report this is not the case. I’ve not seen any of the other versions of it, but so far, this manages to capture both the spirit of the novel and the eccentricity of the family versus that of the islanders rather well. It follows the fortunes of the widowed Mrs Durrell and her four children as they flee a damp and depressing England to start a new life in Corfu in the 1930s. Larry, Leslie and Margo are young adults, Gerry, the narrator and author of the book, is the youngest and strikes terror into the hearts of his family by his fondness for bringing any number of living creatures  (rampant gulls, scorpions and tortoises) into the house as pets to be admired.  END_OF_DOCUMENT_TOKEN_TO_BE_REPLACED

Comments Off on The Durrells: Corfu curiosities

Doctor Thorne: In My Side 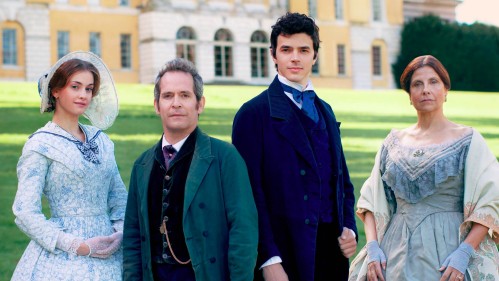 Hurrah, it’s olde worlde rural England. You can tell that from the font they’ve used for the titles. Ah yes, let’s settle down to a nice bit of light gossiping over the teacups – bloomin ‘eck! It’s all gone Midsomer Murders.

Ian McShane creeping about, looking sinister, wondering where all the antiques are, and then bumping someone off. Yes, brutally kills him, by, um, pushing him over. His victim doesn’t even bang his head. That’s a bit like lighting a match to a birthday cake and the whole thing going up in flames because someone’s secretly covered it in brandy. Unexpected. It certainly was for McShane who looked deeply puzzled that one push had proved fatal.

Phew, here we are in olde worlde England, a rural garden with some ladies and teacups. But, shield my eyes – the colours are so bright and garish they must have let a five year old with some Magic Markers loose on the film. It looks exactly like that Specsavers ident crossed with an Utterly Butterly ad. I couldn’t actually concentrate on what they were saying a) they were so OTT and b) I was wondering if a bee was going to alight on their floral headgear. But one of them was getting married and another one wasn’t going to be a bridesmaid. END_OF_DOCUMENT_TOKEN_TO_BE_REPLACED

Downton Abbey: Everything seems to be hitting the rocks

(Series 5, ep.8)  The episode featured a wedding, and who doesn’t love a wedding? Well, the bride’s mother and the groom’s father, for two, but that just added to the fun and made for an extremely awkward dinner party at the Crawleys’ London residence, as the families of Rose and Atticus apparently competed as to who could be the most offensive. I think Rose’s mother, Mrs Shrimpy (soon to be ex-Mrs Shrimpy) won that particular contest. The wedding itself was a tad low-key, though, but I suppose they hadn’t had long to arrange it because the happy couple only got engaged last week.

Thomas is now fully recovered from the side effects of his “gay cure” and had enough energy to join forces with temporary footman Andy in getting one over on Lady Violet’s scheming maid Denker.  This involved a visit to ‘The Velvet Violin,’ which sounds more like a euphemism than a gambling den.  END_OF_DOCUMENT_TOKEN_TO_BE_REPLACED

Comments Off on Downton Abbey: Everything seems to be hitting the rocks

(Series 5, ep.7)  In possibly the most aristocratic thing they’ve ever done, we left Lord and Lady Grantham at the end of last night’s episode preparing to go to sleep with a dying dog in the bed with them. At least it’s got Lord G back in the marital bed after Mr Bricker’s midnight creep.

Lord G’s beloved Isis wasn’t at her best last week, and this week a vet delivered the terrible news that Isis is very soon destined for the Great Kennel in the Sky. Lord G is now carrying Isis everywhere rather like Tom Cruise carries Dakota Fanning everywhere in War of the Worlds.   END_OF_DOCUMENT_TOKEN_TO_BE_REPLACED

Comments Off on Downton Abbey: Bad news for Lord G 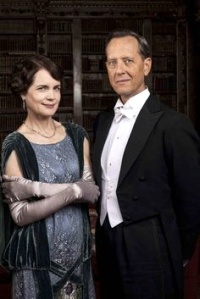 (Series 5, ep.5)   At the moment I’m finding Downton entertaining but not unmissable, while the rest of the family have given up on it altogether. Basically, quite a lot happens, but not much happens. Each week the continuing stories get nudged forward a little, new characters appear and old ones disappear, but I don’t feel any strong story arc. Frankly, it’s feeling just a little bit stale.

So what was happening this week? The Dowager enlisted the doctor’s help to split Lord Merton and Mrs Crawley up, but then they both agreed that actually Lord M and Mrs C are quite well-suited.

Mrs Patmore inherited some money and asked Carson for investment advice just because he’s a man. Then she ignored the advice he gave – mainly because he’s a man, but also he doesn’t know anything about investments.   END_OF_DOCUMENT_TOKEN_TO_BE_REPLACED