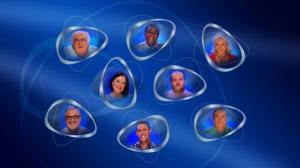 When I was a wee tyke of a lad, and gangs of miscreants yelled ‘egghead’ at me on the playground, the connotations of their cries were largely negative. If only, as I sat mopping up my tears with the sleeve of my second-hand, fraying jumper, I knew that by 2014, it would have become cool to be known as an Egghead.

Nowadays, it’s a hard earned title, held by only the creme de la creme of the quizzing world. Those unfamiliar with the show Eggheads should know that it’s a quiz show airing on BBC2 which sees a team of amateur quizzing wannabes trying to outsmart an expert panel in all things general knowledge for a cash prize. And, in coming episodes, following a very public but successful audition on spin off show, Revenge Of The Egghead which saw her pit her wits against the frustratingly endearing CJ de Mooi, Lisa Thiel makes her debut as the newest Egghead. She was gracious (and blackmailed) enough to give PauseliveAction an exclusive interview about her debut on the hit show. So without further ado, let’s crack ‘er open and see what’s beneath the shell of the latest Egghead…   END_OF_DOCUMENT_TOKEN_TO_BE_REPLACED