Coronation Street: All about Steve

I’ve been where Steve McDonald is right now; and it is, without a doubt, the worst thing that I have ever felt. Even though it is estimated that a massive 1 in every 3 of us will experience first hand some form of mental health issue, there is still an alarming amount of education and awareness required on the matter of depression and anxiety.

That is why I couldn’t be more proud of Britain’s top soap, Coronation Street, for tackling this issue head on with the sensitivity, honesty and realism that it is currently expressing. Those millions of you who read my soap musings both here and on social media will know that I have been fairly critical of Coronation Street over the last few months. But where it has been lacking in other areas, it has more than redeemed itself in this particular storyline.

For quite some time, and very subtly, we have seen Steve struggle with his moods to the point where he currently finds himself at; thoroughly sapped of the joy and energy that the character is famous for. Simon Gregson is playing a blinder of a performance with this story he’s been given; it is a huge challenge to portray accurately but I

recognise so much in Steve. From the blocking out of important everyday worries to the emptiness in his eyes and the lost expression on his face, Steve is a broken man. And yet, the regular comments and tweets I am seeing from people saying ‘What is even wrong with Steve?’ and ‘Steve needs to man up and pull himself together’ proves that many people still don’t really understand the horrendous effects depression can have on the sufferer and on the people around them.

The people tweeting ‘Carla has been through much worse and you don’t see her going on like Steve.’ are not being malicious or tactless; it’s just that there is still a genuine stigma around metal health that perceives people who are overcome by depression as being weak. As Corrie is setting out to prove, that is far from the case. Steve isn’t just being miserable or feeling sorry for himself; he is ill. And that illness is preventing him from feeling any pleasure or hope in life. He is being swallowed by a darkness that really cannot be described in words and it is heart-rending to watch.

END_OF_DOCUMENT_TOKEN_TO_BE_REPLACED

Comments Off on Coronation Street: All about Steve

The Archers: Driving me Mental

I was chatting to my friend Fanoflinda the other day, and she said something extraordinary. She said she had changed her mind about something. As this had never happened before, I bade her speak on.

‘You know how I’m always complaining about the mental health storylines on the Archers?’
‘Yes, you never stop.’
‘How everyone with a mental health issue – Mike, Helen, Pat, Alistair, Eddie – has a few weeks of a problem in its most clichéd form, before it abruptly disappears following a magical radio-land intervention of a very brief therapy course, or a couple of tablets, or simply having realised that things aren’t so bad after all?’
‘I do remember you mentioning this, yes.’
‘And how I lamented that these things should be more realistically portrayed? And how terrific it is on the rare occasions when they are?’
‘Such as Jack’s Alzheimers’, we chorused together.

Fanoflinda is, as you may have guessed, a mental health professional herself. Her dearest wish is to be employed by Vanessa Whitburn as the Archers psychiatric story-editor. ‘Frankly I’d have a lot more to do than that cushy number, the agricultural story editor. He just has to remind them about beets every so often, then goes back to eating cheese and reading Playboy’. 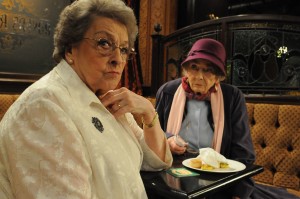 Betty will tell you: it's no joke working in a pub.

‘So what have you changed your mind about?’
‘It’s Jolene. She’s in the throes of post-bereavement depression. Very natural, very well-played, very accurate. People take months, years, to get over something like this.’
‘And?’
‘And it’s boring the bejesus out of me. It would be better if she’d got over it by now.’

Ain’t that the truth. Someone being permanently depressed doesn’t make good radio. Yes, I know you’re going to say what about Marvin in Hitchhikers, but Marvin wasn’t trying to run a pub. Listening to Jolene being depressed as she pours Shires onto the floor and breaks glasses and forgets to greet people is about as much fun as listening to one of Bert’s poems.

It’s no wonder punters are leaving the Bull in droves. I just hope Jolene doesn’t drive us listeners away too. What she needs now is a session of CBT, or a couple of Prozac, or alternatively just realising how much everyone loves her via Harry’s Facebook group.