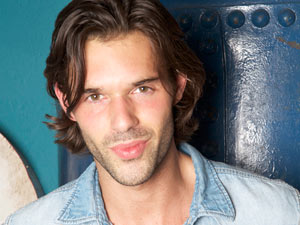 I can see why pretty-boy model Bobby Sabel has flipped, and most amusingly, on Celebrity Big Brother and started spouting Truths to camera. All the other housemates are like children? Yes they are. Kerry Katona a nice person, but a moron nonetheless? Yes indeed. Suddenly he’s become a lot more fun. I feel too old for this CBB and am still a bit of a butterfly viewer. Jedward and Kerry Katona were the only people I’d heard of, well apart from Sally Bercow, but none of them were people I particularly had an interest in watching. Not like the year Germaine Greer walked in the house in a steely grey dress (not that she managed to stay for very long).

I still have no idea who Darryn weird hair/bizarre sixpack implant ‘Paparazzi’ Lyons is. I’m vaguely aware of My Big Fat Gipsy Wedding, but only remember vast pink fairy light lit dresses, not the formidably hard looking Paddy Doherty, a man who talks about ‘servicing’ his wife as a substitute for any housework (although to be fair, when he spoke to her and their daughter on the phone in the diary room on their anniversary, he was very tender with them). And I’d seen The Only Way is Essex once, so I’d heard of Amy and her vajazzling technique (from which she’s been dropped as the ‘face of’ I read here). Having been brought up in a household where saying ‘fart’ brought a stern telling off for mentioning bodily functions, I quite enjoy her straightforward attitude to bodies and sex, with frequent references to her ‘ninny’. Paddy doesn’t quite embrace this openness tho’, and his face was a picture when she was patiently explaining to him what a ‘camel-toe’ was. Afterwards he told the other lads that women ‘just shouldn’t talk like that’. I’m guessing Mrs Doherty’s ninny only comes out to be ‘serviced’.