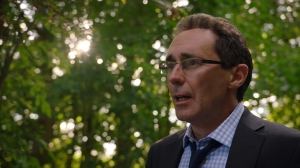 – This episode went total body-horror, with Jac having the awful and full knowledge that to get the dreaded implant out of her she had to place her life in the hands of a man she knew she couldn’t trust at all. It’s scary enough having surgery when you know the surgeon is sane and competent and has your best interests at heart, but Gaskell? Yikes. And you could see all of that playing across Jac’s face coupled with the absolute determination that she had no alternative.

– The sight of Lana’s body with open wounds in Gaskell’s lab was one of the most disturbing things I’ve ever seen on Holby. I loved how for a few seconds Ric and Sacha couldn’t quite comprehend what they were seeing either. It was absolutely horrific.

– The line of the episode for me was the Professor saying that Essie was ‘lying down in a cold, dark room.’ If Hanssen hadn’t immediately chipped in to say that she had a headache, would other people have picked up on just how sinister that sounded?

– The showdown at the lake was quite epic. I liked the hallucinatory bits where Hanssen thought Gaskell was on the bank with him rather than being in the water. Hanssen’s struggle to overcome the effects of the neurotoxin and stay with reality was mirrored by his struggle to understand the full extent of what Gaskell had been doing – particularly when he realised that Gaskell had killed Roxanna.

– This whole storyline has been ambitious and brilliantly done. Gaskell was a bit sinister right from the get-go, but never went full mwah-hah-hah until right at the end. It’s been gruelling, though. Hopefully there’ll be some lighter storylines coming up in the run-up to Christmas. After all this (admittedly brilliant) drama and horror we could do with a bit of sparkle, some romance, and a very large glass of Shiraz.

Holby City: Room at the top 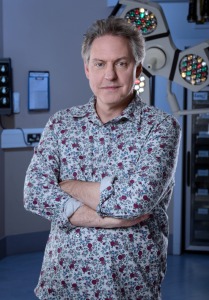 – Jac’s description of her implant, ‘It cracks, it creaks… it throbs and it pulses.’ How on earth has she concentrated on surgery and stuff with all that going on inside her? Yikes.

– Abigail Tate disappeared without much ceremony, didn’t she? So Henrik Hanssen, the former CEO who’s still suffering all types of post-traumatic stress, takes it upon himself to pick up his old job where he left off. This is what moral compasses do. I hope he restores his office decor back to its former serene splendour ASAP though.

– It looks like the Gaskell story is coming to a huge climax next week (clip here). Will we be left with a Mr Nasty vacuum after that? Is that why Selfie’s coming back, to plug the villain gap?

Holby City: Nothing but the work 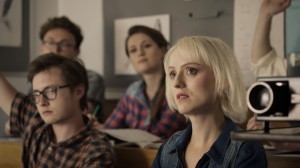 (Series 20, ep. 38 ‘One Man and His God’ by Andy Bayliss 18.9.18) I’ve written a nice long review of this episode over at Metro, but before you go to have a look here are some additional thoughts.

– The ending was just about the most twisted, terrifying thing I’ve ever seen on Holby. The idea of deliberately leaving someone in a ‘locked in’ state (especially as we knew that Roxanna’s mother had already experienced that) – well, even the most seasoned Gaskell-watcher will have been shocked at just how far his drive to succeed has pushed him.

– We’ve had murderous people on the wards of Holby before (Nurse ‘Killer’ Kelly Yorke in series 5/6; Hanssen’s son last year), but Gaskell is an entirely different kettle of fish. The scary thing about Gaskell is that he truly believes he’s only one step away from the next great medical breakthrough. He takes no pleasure in people being hurt or dying, but at the same time he views anyone who suffers during the course of his experiments to be collateral damage. The bigger picture is all he cares about.

– I loved the flashback scenes. Young Gaskell, Hanssen and Roxanna were perfectly cast and played their parts brilliantly, and Andy Bayliss’s script filled in plenty of blanks about each of them in a subtle and moving way. I also liked how the different sets of flashbacks were in the minds of each of the three older characters, so each one had a slightly different focus.

– Scenes between Hanssen and Dominic have become as precious and lovely as scenes between Jac and Sacha. It’s a similar dynamic – a closed-off, apparently cold person and someone who is expressive and emotionally open who sees them for who they really are.

– Gaskell’s last words to Roxanna – ‘forgive me’ – were chilling. I honestly doubt she’s going to be forgiving him any time soon, even if he ‘fesses up and sorts out the mess he’s left inside her head (if that’s even possible). 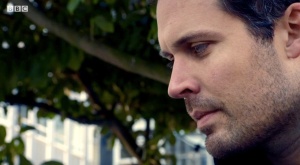 (Series 20, ep. 13 ‘No Matter Where You Go, There You Are – Part Two’ by Andy Bayliss 27.3.18) Last week’s cliffhanger made us wait an entire week for the verdict in Ric’s trial. And this week, we got that verdict, though it was a very low-key affair. We didn’t see the courtroom. We didn’t even see Ric. We heard the news as relayed to Ollie by Meena, and then Serena popped up to Darwin to present Fletch with a bottle of celebratory Shiraz.

Celebratory? Yes! Because the news is good. Ric Griffin is a free man!

Having swiftly wrapped up the ‘Ric’s Prison Hell’ storyline, the episode settled in to the topic at hand, which focused on Oliver Valentine and his determination to get back to being a doctor once again, and Henrik Hanssen’s ongoing struggle to come to terms with the consequences of his son’s actions.  END_OF_DOCUMENT_TOKEN_TO_BE_REPLACED

Holby City: Shadow of a gunman 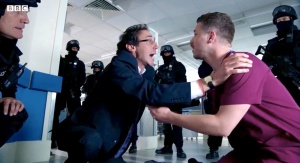 (Series 19, ep. 62 ‘Group Animal, Part Two’ by Andy Bayliss 7.12.17) I don’t know how I can do this brilliant, tense, suspenseful episode any justice other than to give you a blow-by-blow account of what happened. There was so much detail in it, and not a single scene was wasted or slack. Brilliant work from writer Andy Bayliss. Don’t read on unless you’ve seen the episode!  END_OF_DOCUMENT_TOKEN_TO_BE_REPLACED 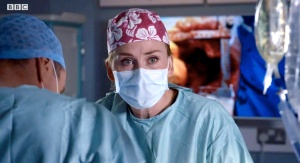 (Series 19, ep. 61 ‘Group Animal, Part One’ by Andy Bayliss 5.12.17) Jac has been suffering for months now – ever since Jasmine died back in June. We saw her pain in the weeks just after that – remember when she looked so tightly held together it seemed like she might explode at any minute? Since then she’s been her snarky, sarcastic, business-as-usual self, until recently – when it became clear that she hasn’t dealt with losing her sister at all, and she isn’t coping.

And then this episode started with Jac, looking more relaxed than she has for weeks, telling Raf that she was leaving Holby. She was going to take her daughter a long way away, and concentrate on being a mother and being happy.

Thousands of Jac Naylor fans blinked back tears of disbelief. Holby without Jac? Surely not? But worse was to come.  END_OF_DOCUMENT_TOKEN_TO_BE_REPLACED 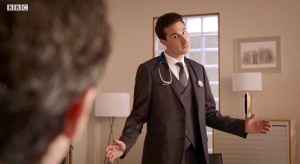 (Series 19, ep. 48 ‘How Loud It Is’ by Andy Bayliss 5.9.17) My goodness, Holby City is getting more like Shakespeare every week. The sheer amount of detail in this episode – in the writing, the performances and the way it was directed – was just breathtaking.

Holby is under threat of a merger with The Mythical St James’s, and there’s a recruitment freeze. 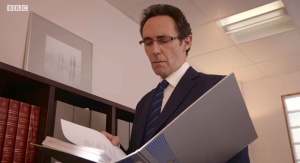 As if this wasn’t stress enough for Hanssen, his son, Fredrik, was back. Last time we saw him, he’d been responsible for a very dodgy drugs trial, and there was a huge moral face-off in which Hanssen risked never seeing his grandson again by informing the Swedish medical authorities about it. It seems that Fredrik was acquitted in Sweden, but his “reputation is compromised.” So he’s now working at Holby City, where a compromised reputation and a frosty relationship with the CEO/your father won’t hold you back.  END_OF_DOCUMENT_TOKEN_TO_BE_REPLACED