Waterloo Road: Leo and Sonya let the school down

(Series 10, ep.19) The penultimate episode, and a few plot strands were resolved. Justin was permanently excluded for cyber-bullying Bonnie, but a bit of detective work from Kenzie soon uncovered the real culprit to be mild-mannered younger Fitzgerald brother Leo. Oh, Leo. That’s no way to impress people.  END_OF_DOCUMENT_TOKEN_TO_BE_REPLACED

Comments Off on Waterloo Road: Leo and Sonya let the school down

(Series 10, ep.18) The appearance of Ianto Jones off of Torchwood at the end of this episode has finally made sense of ten series’ worth of barmy madness. Waterloo Road is the centre of an alien invasion! Most of the staff and pupils are humanoid(ish) visitors from other worlds! There was another clue in this episode when New Marco told his science class that extra-terrestrial life was a “mathematical certainty.” Thank heavens that Torchwood are finally on the case (though I seem to recall that Ianto Jones is technically dead…).  END_OF_DOCUMENT_TOKEN_TO_BE_REPLACED

(Series 10, ep.17) Family therapy time, and Yaughan, Pooky and the kids were assembled in front of a fairly useless-seeming counsellor, getting more upset by the minute. Yaughan refused to get involved, Pooky ended up in the ladies’ puffing an illicit fag and unburdening herself to Christine, Leo sulked and Justin ruined another school shirt by fighting and bleeding all over it.  END_OF_DOCUMENT_TOKEN_TO_BE_REPLACED

Waterloo Road: Too motivated for his own good

(Series 10, ep.16) Mock exam week and the pressure was on. Cycling Dale, who as we know hasn’t been eating properly/at all since we first met him (and has been purging at the other end with laxatives), is so driven that he even found a way to still train while taking his exam. Basically you ignore the exam paper, clench your fists and put your head down and visualise riding your bike. This does nothing to prepare you for those all-important exams, but Dale’s focus was all about sport anyway.

A double tragedy, then, that nobody apart from Lenny had really noticed he never eats and it all ended in him collapsing after a cycling trial. As if that wasn’t bad enough, Maggie has now determined to Keep An Eye On Him.  END_OF_DOCUMENT_TOKEN_TO_BE_REPLACED

Comments Off on Waterloo Road: Too motivated for his own good

(Series 10, ep.15) “Must… have… LAPTOP!” Leo Fitzgerald stormed through this episode like The Incredible Hulk in a school uniform, his eyes glazed, his hair uncombed, not allowing anything to get between him and the computer game he’s addicted to. And I mean addicted. When his laptop was confiscated he took to begging, borrowing and stealing anybody else’s, just to get back in the game. Nobody was safe – even poor Sonya received a facial/laptop whacking when she tried to get between the Shadow Warrior and his objective.  END_OF_DOCUMENT_TOKEN_TO_BE_REPLACED

Comments Off on Waterloo Road: An interesting afternoon 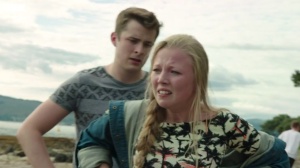 (Series 10, ep.14) I’m surprised they haven’t banned school trips at Waterloo Road years ago. They never pass off without incident, particularly when one of the supervising teachers is so lazy she lets her group wander off while she has a quiet read, and the other one is inexperienced, boring and a bit useless.  END_OF_DOCUMENT_TOKEN_TO_BE_REPLACED

WARNING: This article contains spoilers which some readers may wish to avoid

It may be the last series of Waterloo Road (sob!) but there is going to be no let up in drama as the hit school based drama heads to its climax in coming weeks. In Monday’s episode, we see former shrinking violet turned outgoing fake tan-aholic Bonnie take centre stage as her desperate bid for attention backfires spectacularly.  END_OF_DOCUMENT_TOKEN_TO_BE_REPLACED