Twatbox: Police interceptors (and their many brethren) 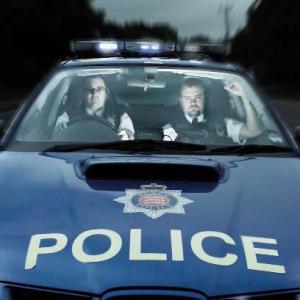 Let me make this crystal clear – generally speaking I’m a person who has great respect for the boys (and girls) in blue. They are not being twatboxed. My bile and loathing is reserved for the police officers who feature in Police Interceptors/Road Wars/Traffic Cops/Send in the Dogs and the numerous other variations on this theme.

Whether the producers choose twats, or whether TV cameras turn perfectly decent coppers into twats, it matters not. These programmes are guaranteed to have my blood pressure soaring into stroke-worthy numbers.

It doesn’t seem to occur to the Interceptors and their chums that addressing the people they’ve pulled over as ‘mate’ doesn’t engender the kind of respect that they inevitably demand at some point in the conversation. I’m a pretty mild-mannered chick, but I’m not going to be showing respect to a policeman who starts a conversation by calling me ‘luv’. (I’m probably past ‘Miss’ but ‘Madam’ will be a good start, thanks.)

This bunch don’t use the old ‘Who do you think you are, Lewis Hamilton?” chestnut, but they will deploy a wide range of patronising and sarcastic remarks that certainly wind me up.

You may, reasonably, point out that the people they’ve picked up or pulled over are breaking the law to some greater or lesser extent – but I don’t see how this approach does anything other than pander to the prejudices of the camoflage-wearing viewers and get the director’s juices flowing.

And if all that wasn’t enough to bring on hypertension, they employ ‘geezers’ to provide moronic voiceovers heavy on puns and law and order-related slang, light on information or even entertainment. If the Interceptors’ scriptwriters were writing this, they’d probably finish off by saying “TV like this this [overlong pause] is just plain criminal.” Twats.

I was going to blog about Winner’s Dining Stars, but I found the whole programme, and particularly Michael Winner, to be so bloody annoying, I just couldn’t bring myself to do it.

Where do we start with the man? Why I imagined this programme might provide light entertainment I cannot imagine. I can’t bring myself to even laugh at his preposterously over-inflated view of himself as an ‘expert’ on all things culinary. There are people whose opinions I will trust when it comes to food. Monica and Michel Roux Jr after seeing them on MasterChef for example. They know their stuff.

What does this odious, Mr Toad of a man know about anything? His career has included making terrible films and crass adverts. He seems to be very wealthy, which is all well and good, but hardly proves he had any talent for anything other than getting rich. He has failed to commit to any woman in his long life until now, after he’s had major heart surgery, which would not endear him to my heart one bit.

I don’t understand the premise behind Dining Stars or why anyone would be fool enough to invite this pompous ass into their house so that they can end up being thoroughly insulted in front of their family in really weirdly inappropriate cinema setting.

He ended up in tears facing a woman (about whom he’d been incredibly rude) who had lost ten stone but who had a child with learning disabilities and one with a serious heart condition. Her food (other than some brownies) was pretty average, but her story, and the warmth of the family, led to him crying, so he seemed to give her a pity ‘star’. Pitiful more like. I won’t be tuning in again.

Comments Off on Twatbox: Michael Winner. The Emperor’s New Napkin 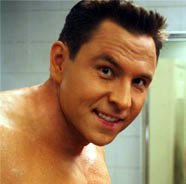 “I’ve just been watching that new Chris Moyles thing,” Mr PLA said. “David Walliams is humping somebody again.” Turn on any panel-type quiz show and the chances are pretty high that you’ll find David Walliams pretending to hump someone. In this case it was Peter Andre, who has surely suffered enough.

Now, I like a good sexual innuendo as much as the next person. I was practically brought up on giving Julian Clary a warm hand on his entrance. But the thing with Julian Clary is that he has charm, style and charisma to spare, whereas David Walliams is just… embarrassing. There are obviously people who find him hilarious (one has gone to the trouble of editing “highlights” from an appearance on 8 Out of 10 Cats), but he makes me feel all creepy with his lechy manner and his great big face.

This may just be me, though, so feel free to tell me I’m very, very wrong and he is, in fact, a comedy genius.

I had no problem with Amanda Holden as an actor. She did bitchy very well, and I liked her very much as Mia in the entertaining hairdressing drama Cutting It opposite Sarah Parish. The women out-shone the men in it, and in the weekly  battle of the clippers, they were equals. It was a fair fight.

I didn’t view gossip about her marriage problems, relationship with Neil Morrisey and subsequent divorce from Les Dennis to be any of my darn business. I was holding my tongue about her as judge on Britain’s Got Talent because I’m not sure how much you can judge a person sitting next to Simon bloody Cowell.

However, my dislike for her began to grow (along with loathing for the whole patronising bunch of tossers on the judging panel) with her first reaction to seeing Susan Boyle on the show. She has the sort of prissy little nose I associate with Disney characters and nasty girls who thought they ran the school playground à la the film Heathers. And upon sight of Ms Boyle, she turned it right up. Sneering in character is fine and appropriate, not at a real person, not when you’ve been blessed with conventional good looks, wealth and you wield a lot of power in the world.

But it was later, on  another show, after Susan Boyle’s success, that I really could cheerfully have shoved a mud pie in her smug, silly face. She was referring to Boyle’s ‘little problem’ of facial hair. Oh yes Amanda, very big, very witty and clever of you to mock her for having a beard and not hiding it well enough. I doubt she’d come across laser treatment, or could have afforded it. Unlike you, she didn’t have access to a wealth of beauticians, stylists, plastic surgeons, personal trainers and designer gowns.

Got you a cheap laugh didn’t it, at the expense of someone not equipped with your poison tongue and not in a position to get back at you for your vanity, vacuity and imbecility? Not a fair fight. Shame on you, Amanda, for your unprovoked unkindness.

Comments Off on Twatbox: Amanda Holden

What happens if you make The Apprentice a design-based thingy, and move the action to Paris instead of London? What if you replace world-weary curmudgeon Sralan Sugar with “design guru” Philippe Starck? You get Design for Life, which started this week on BBC2.

12 or so contestants made their way from the barren design wasteland that is Britain, via the Eurotunnel to Phil’s studio/office thingy in a former funeral warehouse on the Parisian outskirts. We knew it was Paris because the Eiffel Tower was present in every establishing shot. The contestants had been chosen by Phil on the basis of sketches for designs that they’d submitted to him. These seemed mainly of a fairly morbid nature – coffins, light fittings shaped like nooses (what a pretty idea that is), but Phil is “wacky,” you see, and that sort of thing is what he likes.

Or is it? Desperate to please Phil in a task which involved selecting items from a supermarket that represented a concept, it soon became clear that the only way to get on Phil’s good side is to think like him. And thinking like him, because he is a wacky guy, is only possible if you are almost completely pretentious yourself. So the person he approved of most was the one who chose a socket set as representing “female,” for the obvious reason that you plug things into it, but then waffled about soul and emotion and goodness knows what-all.

Unless you hit that kind of waffle jackpot, pleasing Phil is next to impossible, because he makes his life up as he goes along. He is not in the business of designing products that already exist, he explained. This is the man who brought us the lemon squeezer on long tripod legs. No-one had ever had a lemon squeezer before that. He is a monstrous ego in leather trousers who is puffed up even further by his fawning versions of Sralan’s Margaret and Nick – his wife Jasmin (played by Ferdy from This Life) and one of his designers (played by Moby). I desperately, desperately hope that by the end of the series someone is going to have the guts to stop the sycophantic grinning and nodding every time the silly little man utters a proclamation, and tell him he is full of b.s.

Comments Off on Twatbox: Philippe Starck