Silent Witness: You can’t marry a man you just met

(Series 21, episode 3: part two, Graham Mitchell) Starting scenes switch seamlessly between a gormless, silent Nikki, and a loud police investigation asking, “where the hell was security?”. Our annoying British DCI has no time for Nikki’s emotions, questioning her about what had happened the night before. Something wonderful in this opening part of the episode is the subtle references to Nikki’s experience in Mexico, showing it is still an important arc. Her senses have heightened, picturing exactly what had happened, and being able to replay the muffled sounds she had heard while being trapped in the bathroom, mirroring her experiences while being trapped ‘underground’ in Mexico. Because of her personal involvement with Mr Garcia, Nikki is moved off the case, but knowing Nikki, viewers realise this won’t be for long.  END_OF_DOCUMENT_TOKEN_TO_BE_REPLACED 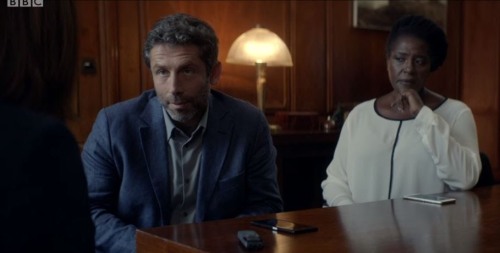 (Series 21, episode 3: part one, Graham Mitchell) All focus starts on the US Ambassador in the UK, having just appeared on BBC news, seemingly being followed by a man on a motorbike. Except this is just a trick and we actually see the man who left the ambassador after the interview, being undercut by the motorbike, flipping over it and then being shot twice by a man in biking gear, even though he looked pretty dead after the first one. But hey, I’m not a doctor, so who knows?  END_OF_DOCUMENT_TOKEN_TO_BE_REPLACED

Silent Witness: Well that was a quick solve!

(Series 21, ep. 2 ‘Duty of Candour’ by Matthew Arlidge) This episode was simpler to follow than last week, and we definitely know the murderer this time, but there were still several paths and mini plots to keep us occupied for the episode. Keeping the Mexico arc going, the episode starts with Nikki waking up in a strange man’s bed, something that would have been the subject of many a joke in the Harry era, yet now it’s a symptom of her PTSD. Jack is coping by fighting like he always does, flirting with his sparring partner, and being distant with Nikki.

It turns out the woman Jack was boxing with was the DI on the case this week. Jack initially thought her partner was the ‘guv’ but I took one look at that man and knew instantly that he was not. Throughout the episode he had a scared look on his face, as though he was about to cry or be sick, or both. No, what they needed was someone to be tough, someone like Naomi Silva. It was a good job they had her on the case as it seems like she really knows how to do her job, I’ve never seen a murder be so swiftly solved in Silent Witness: 20 minutes into the episode, the suspect was pressed up against DI Silva’s car, chased up lots of stairs before finally giving in, and jumping off the roof. He must have felt guilty after killing his wife who he found out was carrying another man’s baby, and then killing that man, played by none other than Edward MacLiam, one of two Holby alumni in this episode. END_OF_DOCUMENT_TOKEN_TO_BE_REPLACED

Comments Off on Silent Witness: Well that was a quick solve!

Silent Witness: Five murders for the price of one

(Series 21 ep. 1 ‘Moment of Surrender’ by Ed Whitmore) This episode was exactly what we needed to ease Nikki back into the Lyell and for us viewers to ease into a new series and fully understand what was going on without having a migraine. I am joking, of course.

The episode started with a creepy house in woods where a family were on holiday, as all good murder stories should start. This was followed by the angry father grabbing a knife and shouting at some kids in creepy masks outside to match the setting. We don’t actually see what happens because this is where the new theme tune kicks in. It’s as though they know the viewers aren’t going to be happy with the theme tune change, as they follow this up with scenes of Jack in a tightly-fitting t-shirt. Less nice is the fact that Nikki is still having flashbacks and hunky Jack isn’t answering her calls. As we find out later, he feels guilty that he wasn’t the one to find Nikki and can’t deal with her being back or in fact looking at her, or talking to her, so much so that he misses various pieces of evidence. I personally feel like this episode is setting them up as a potential couple, although if you have taken a look at spoilers for future episodes, you’ll have seen that Nikki is due to have yet another love-interest this series – we’re taking votes now on whether this one is either a bad guy or will be dead by the end of the two-parter he arrives in.  END_OF_DOCUMENT_TOKEN_TO_BE_REPLACED

Forgive me, but I am going to inflict a (*grimaces*) listicle on you. However, I want you to be able to go and watch the first episode of Unforgotten before a) it slips off ITV Player and b) the second episode airs, and I don’t have time to do it proper paragraphy justice right now. I will however spare you a ’24 reasons why you should be watching Unforgotten’-style headline…

If you catch up on episode one now, you’ll be ready to start watching in real time on Thursday (ITV1, 9pm). If the next five hours are as good as the first, we’re in for a treat.

It had the cosy, rural setting, the received pronunciation English accents, the urgent violin soundtrack, the ridiculously high-waisted costumes and just the right amount of sexual scandal and intrigue. Yes, Grantchester was pretty much Downton Abbey, just a bit racier.

It was a comfortable drama, a none too strenuous watch and held my attention (which is no easy feat; ask my long suffering wife) for the full hour. It focused on the vicar of a small village, who found himself embroiled in a murder investigation after looking too deeply into an apparent suicide. The vicar, with the almost porn-star name of Sidney Chambers, held a funeral for the ‘suicide’ victim where all others would not, which won him the respect and attention of the victim’s secret lover, who suggested that all was not as it seems.

Unable to resist the conspiracy, Sidney sought the advice of a policeman called Geordie, played by Geordie Robson Green of Waterloo Road and Extreme Fishing fame. Geordie was a no nonsense, chain smoking, backgammon winning, Simon Cowell trouser wearing arm of the law who took some heavy persuading to buy into Sidney’s murder theory. But Mr Chambers kept up his Sherlock Holmes act and before long, the pair set out to crack the case.

END_OF_DOCUMENT_TOKEN_TO_BE_REPLACED

Chasing Shadows: A shadow of a drama

Having enjoyed the recent ITV drama, The Widower, starring Reece Shearsmith, I had high hopes for the new four part crime

thriller Chasing Shadows, in which a difficult to work with detective (aren’t they all!?) with autistic tendencies takes on some missing persons cases.

The show promised it would be more than a standard crime drama and would take a unique slant on what is very much a well worn format, but unfortunately, two episodes in and one very uninspiring case solved, and I am still not convinced of this one bit.

Reece Shearsmith gives an undeniably decent performance of a man suffering from Aspergers Syndrome, adopting some physical and voice attributes that aren’t subtle but aren’t overdone either (just).

However, if it was the show’s intention for us to warm to DS Sean Stone, I am afraid that we are a long way off the mark. The writing lacks any warmth or depth to a character that could potentially be extremely complex, and there is little to no chemistry between Stone and his partner, Ruth Hattersley, played adequately by Alex Kingston.   END_OF_DOCUMENT_TOKEN_TO_BE_REPLACED