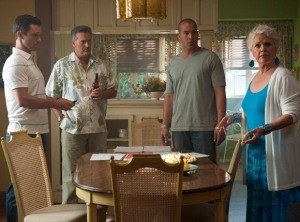 Burn Notice, you will have noticed by now, is packed with explosive moments. Some are, literal, and usually provided by Fi from her seemingly neverending supplies of C4, others are blackholes of emotion, still more come from genius moments of casting.

Fi doesn’t need to stick detonators into anything this week, but that’s okay because the fuse the writers lit when Michael inadvertently burned Jesse has finally burned to within an inch of the Acme dynamite. Oh, and there is a piece of guest casting to make you bite your fist with glee.

END_OF_DOCUMENT_TOKEN_TO_BE_REPLACED

Ah the topsy-turvy world of Burn Notice… it throws a whole pile of twists at the big story arc this week which make for great viewing (especially as we get the return of psychopath and ‘walking nightmare’ Simon).

The writers also find a new way to show off Michael’s skills, when he goes undercover in prison to protect Juan, an old friend of Sam’s, from a prison gang leader who’s planning to kill him.

Here we are at the halfway mark of the fourth season, inching our way forward with the big global conspiracy mystery doo-dah. This week Michael wants Vaughan to arrange a face-to-face meeting for him with Simon, while Vaughan doesn’t want that to happen but does want Fi to hand over Simon’s bible (stolen by Michael and Jesse from the safety deposit box last week) in return for getting Jesse his old job back, no questions asked etcetera, etcetera, etcetera.

Luckily for Michael a little leverage falls into his lap when FBI agents Lane and Harris are forced to ask him for help locating a witness who’s being targeted by hitmen to prevent him testifying against a Turkish syndicate. On the grounds that being owed a favour by the FBI is a good thing, Michael agrees to help – and ends up shackled to one hitman while pretending to be another one. Just another one of those Michael Westen days…

END_OF_DOCUMENT_TOKEN_TO_BE_REPLACED

Comments Off on Burn Notice (4.9): The hitman and him

Sometimes, not often, but just sometimes you almost feel sorry for the bad guys in Burn Notice. This is one of those weeks.

They’re not nice men. They’re the kind of kidnappers who take the ransom and then kill the hostage, but no one should be unlucky enough to accidentally kidnap Fiona Glenanne…

[spoilers below the line…]

END_OF_DOCUMENT_TOKEN_TO_BE_REPLACED

Burn Notice has had some great guest turns in its time (Tyne Daly, Richard Schiff, John Mahoney and Lucy Lawless to name just a few) but this week sees an appearance from a 70s icon. The one and only Burt Reynolds as an ex-spy who has brought himself to the attention of his old enemies in Russia. You wouldn’t think there’s a lot of scope for humour when dealing with a Russian wetwork team – but you’d be wrong. Lots of “My name is Michael Westen. Yes. That one.” and “He’s Michael Westen/There’s only four of us.” kind of dialogue.

We need all the humour we can get, because Past and Future Tense also trawls some very dark emotions. Sam calls Paul the Ghost of Christmas Future, but after sitting through the poignant scene where Paul’s memory is revealed to be failing and he points out to Michael that “stories are all you have left” after a life of spying, I hope these the shadows of the things that may be only, not they shadows of things that will be.

Unfortunately this isn’t the only darkness facing Michael. Fiona is increasingly unhappy that Michael is preventing Jesse from learning the truth about how he got burned and accuses him of caring more about the idea of people than about the actual people who have got his back. This will not end well.

But let’s not leave on a low note, instead let us celebrate Michael speaking lots of Russian (very sexy), Madelaine showing us where Michael got his spy skills from, Sam looking at Michael like he’s an idiot for asking if he knows where the Bananafish Bar is (“Er yeah. It’s a bar. I’ll drive”) and the idea that Michael has no endorsements on his driving license (also is that a headshot from Touching Evil they’ve used on the license or is that what Jeffrey Donovan really looked like in 1984?).

I’m not sure if I’ve ever given enough credit to the Burn Notice writers for coming up with different twists to the ‘help the client’ plots each week. Entry Point is another excellent example as Michael and Fi take on Buddy, a man who makes knock-offs of luxury goods (shoes and handbags mostly) and whose most recent client is now trying to kill him.

It turns out that Buddy was making part of a replica sword that belonged to Alexander the Great, and his client is planning to steal the original from Jim Robinson (sorry, Mr Bocklage). The writers do some neat rug-pulling on Michael (and us) before the thief is finally dumped in the boot of Fi’s car (a small space that has seen so many occupants).

Meanwhile Sam and Jesse are using manipulation rather than intimidation on Kendra (who clearly demonstrates why physical pain isn’t going to get them any answers when she repeatedly slams her own head into a metal table) to find out who paid her to kill Kassar (aka Cobra).

Comments Off on Burn Notice (4.6): The week of slippery characters… 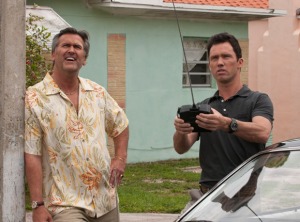 Oh Burn Notice is really back on its game now. I was concerned after the first couple of episodes that it had lost its zing, but Neighbourhood Watch has put me at ease.

This week’s client is David, a doctor who runs a clinic in one of Miami’s poorer districts. He’s also a man who has crossed the local gang selling heroin on the street corner and who refuses to run away from their death threats. He may also be Michael’s most reluctant client yet (it’s his girlfriend Lauren who came to Maddy for help).

END_OF_DOCUMENT_TOKEN_TO_BE_REPLACED

Burn Notice (4.4): Getting hot and sweaty with Michael Westen

It is not often we see Michael Westen break a sweat (I can only presume yoghurt has phenomenal antiperspirant qualities considering his activities in the humidity of Miami), but we are treated to a hot, bothered and down-to-his-vest Michael this week.

What should be lunch with Sam and two friends (to pay Sam for tracking down the address of the man known as Cobra) – and which already sounds like a job to Michael (who recognises a classic scam when he hears one) – rapidly turns into a hostage situation when Sam’s friend Josh takes a gun to the offices of this week’s chief scumbag Nick Madison.

END_OF_DOCUMENT_TOKEN_TO_BE_REPLACED

Comments Off on Burn Notice (4.4): Getting hot and sweaty with Michael Westen

The trail to the bad guys (specifically a guy codenamed Cobra) leads Team Westen to the Miami docks and this weeks’s client, a guy being bullied by the Mafia.

Made Man is, by Burn Notice’s high standards, a bit of a workaday episode. Although workaday Burn Notice is still better than many other programmes.

It feels very much as if it’s designed just to get all four team members working together and respecting each other’s skills – not to mention bonding Maddie Westen with her lodger through the sad tale of his mother’s death in a grocery store hold-up when he was nine. 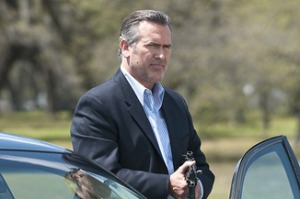 The most dramatic moments are the one where Jesse forces Sam to ‘pimp’ a story from his own life (about saving a fellow SEAL in El Salvador) in order to manoeuvre Tony into the stitch-up position, and Sam calls him out on it; and the moments in which Maddie realises the truth about who is responsible for Jesse’s predicament (even as Jessie tells her that Michael is a ‘good man’) and later gives Michael hell for it.

Not every episode can be packed with snark or exploding C4, but a little more of both to leaven the darkness here would have been good. Having learned that Jeffrey Donovan directed the episode makes sense of why we get so much Bruce (never going to complain about that!) and so little Jeffrey. Here’s hoping that next week brings back the snark…

Burn Notice (4.2): In which there is much bitching and stitching (up)

Fast Friends is a cunning episode which combines the long-term plot with the client of the week. It also has more jokes than last week (if I wanted humourless guys and girls with guns running round Florida I could watch CSI Miami) and introduces us to Coby Bell  – the “strapping” (Fi’s description) actor playing Jesse Porter.

Vaughan wants Jesse tracked down and shipped to a secure facility where he can’t make a fuss about being burned. Michael, feeling guilty, argues that Jesse is a resource and gets permission to handle the situation. As it happens Jesse is looking for Michael to help him with a different problem…

END_OF_DOCUMENT_TOKEN_TO_BE_REPLACED

Comments Off on Burn Notice (4.2): In which there is much bitching and stitching (up)