Holby City: Whatever happens I’m never going to leave you 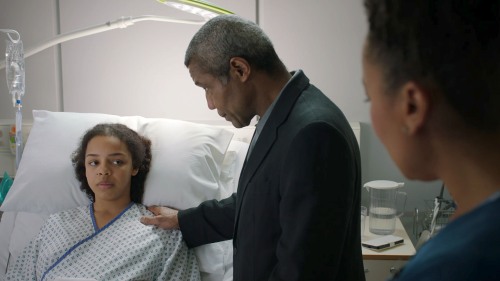 – I was so happy Darla decided to keep the baby. I hoped she would. And that Peter seemed like a very nice person too – and possibly a future Secretary General of the United Nations if he has the diplomatic skills to bring Kofi around in one visit/phone call.

– It was lovely that Ric apologised to Zav, who has always had his best interests at heart.

– But poor Donna! She loves Ric like a father and she’s going to be so worried.

– Is Connor The Next Holby Villain? Or is he just a man who wants to see his daughter and is confused to find that a nurse has appropriated her? I couldn’t blame him.

– When are Sacha and Essie going to get back together again? That man adores her.

– Kian and Bea… presumably she’s going to be back when the decision to repair rather than replace the valve goes pear-shaped, resulting in much anguish for Holby’s Hungriest Heart Surgeon. And possibly a great deal of tutting from Jac Naylor, who will have to pick up the pieces when Kian’s personal involvement rules him out of operating on Bea a second time.

4 responses to “Holby City: Whatever happens I’m never going to leave you”