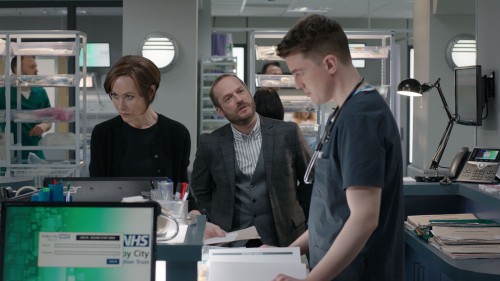 – Ciaran’s dislike of Connie is coming across as not entirely professional (to say the least). ‘The mighty Beauchamp is still gliding through the department’ sounds petulant and hissy. And he was so thick not to look in her bag for the pills.

– Jade is adorable. Memorising a poem for Marty’s mum was above and beyond the call of duty.

– David is also adorable, though I’m not sure he had to tie Charlie up with a bum bag to convey his message that Charlie and Duffy would get lots of support from the team. It was funny, though.

– Poor Marty, though. ‘You’re just not the son that I envisaged’ was absolutely cutting.

Comments Off on Casualty: It’s nothing kinky