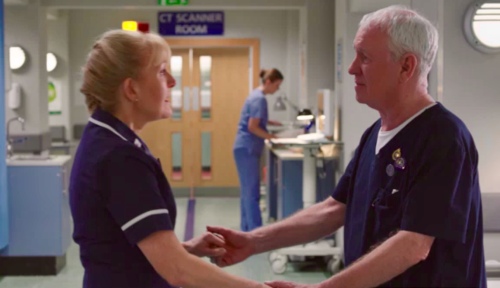 – Is Duffy being brave or a bit daft by telling patients and their relatives that she has dementia? I admire her not wanting to keep it hidden, but on the other hand (as we saw in this episode) it is a bit risky. Patients need to have confidence that they’re going to have the best care. Also we’ve seen Duffy making mistakes due to her dementia before she was diagnosed. How does she expect to know whether or how it’s affecting her now, if she didn’t before? Or am I being guilty of exactly the sort of prejudice Duffy is trying to fight?

– I’m very glad Charlie and Duffy are back together again, though. The awkwardness between them was just wrong.

– David is absolutely precious, isn’t he? Telling Duffy about Charlie getting her the last muffin: ‘That’s love, that is.’ He understands that the biggest love expresses itself in the smallest ways sometimes.

– I admit I missed a good few months of Casualty at one point (when Connie was ill) so I really don’t understand the weird dynamic between Connie and Elle. Can anyone enlighten me?

– Hurrah for Iain being back at work. Now we just need Jan to ease up on him a bit so he can get on with what he does best.