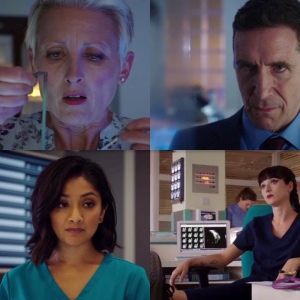 (Series 20, ep. 37 ‘All Lies Lead to the Truth’ by Robert Goldsbrough 11.9.18) This week’s review can be found over at Metro. Before you go, here are some random musings about the episode.

– Is Meena’s new car cursed? She’s had a terrible time ever since she got it, with a miserable birthday followed by a Boxing Birthday (or is it just my house where we have those?) in which she reverses into Serena’s car and later on knocks down a fleeing neurosurgeon. If I was Meena, I’d be getting that car swapped for something a little less haunted, ASAP.

– I thought Roxanna’s spying on Gaskell was really suspenseful. The bit where she was snooping around the wet lab and he was walking along the corridor was scary. I’m still not sure how she got out. Did she find a secret back door? Or had she gone out of the front door before Gaskell turned the corner?

– And then when she revealed to him what she knew and he turned the tables by trying to tell her that she wasn’t well. Will she wake up and manage to tell Hanssen what she knows before Gaskell can go any further? Or is the staff member with the best quiff since Fletch already destined to be a commemorative plaque in the Linden Cullen Memorial Shrubbery?

– I do enjoy Salma Hoque’s acting. She makes me feel quite protective towards Meena. I want to defend her from nasty arrogant men and former mean girls and sulky friends. I want to tell her that her brains and her drive to succeed are worth more than just having a ring on her finger and/or being popular.

– When Roxanna opened the jar containing Julie Bloom’s embryos (handily labelled JULIE BLOOM in big friendly letters) and a lot of vapour came out, was that supposed to be liquid nitrogen in the jar or something like that? Would Roxanna have been able to handle that without gloves?

– It was glorious to see Frieda back. The little friendship with Zav was a nice thing, too – they seem quite fond of each other and she isn’t impressed by his charms and he isn’t scared by her and it’s good. I hope other Holby writers explore that relationship a bit more.

– Clive was a sweet character. I like it when Frieda has eccentric patients who interest her. It’s a shame Clive never got to meet Gaskell, though. It would have been an iconic moment to have the seventh and eighth Doctor Whos meeting face to face in the corridors of Holby City Hospital.