Ready, Set, Cook! Or rather stand looking confused at a chicken, asking which part is the breast (Monty Panesar). Yep, Celeb Masterchef is back. Is it the same as before? No, it has ‘The Wall’.

Gregg’s (aka Celeb-irritant Shrek) saucer-eyes nearly expanded off his face with excitement at announcing this new development. As walls go, it’s safe to say that Trump’s one is still uppermost in people’s consciousnesses. My ten year old liked it though, so I guess it has some appeal. The pairs are sent to either side of the wall to attempt to make exactly the same dish. They can call out to each other, a la Pyramus and Thisbe, about what procedure they are doing but never the twain shall meet. Until they are summoned to the judging table of doom to see which offering looks more like a dog’s dinner. Selfish Martin Bayfield nearly toppled the wall (metaphorically rather than literally, although that would have been fun). At 6 foot 10, the pro rugby player/giant was obviously taller than any of the set designers had reasonably expected anyone to be. He could look straight over the wall. However, he is a sporting sportsman and refrained from doing so. 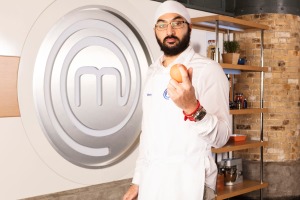 On the subject of sportsmen, I am particularly intrigued by Monty. According to Wikipedia, he is a ‘slow’ bowler, which seems apt. Even I know that bowlers have to run a short distance prior to launching a ball. How on earth did he manage to get up the speed? Did he have those magic trainers with little wheels on? His setting seems permanently on slow and incapable of doing more than one thing.

One of the funniest things I’ve seen recently is Head Chef Frank, apoplectic with rage at having to deal with him and Gemma Collins in the same kitchen. Sadly the two were on separate teams; how delicious it would have been if they’d been put together.

‘Come ON!!!’ bellowed exasperated Frank. ‘They’re eating this today, not next week!!’

Meanwhile Monty ambled about in a daze and Gemma went for a natter with a customer. Fortunately for these two, their partners, Stef Reid and Zoe Lyons, picked up not only the slack but the whole damn rope, grafted themselves into the ground quietly and food was served. The meek did inherit the earth, or rather their places in the next round, so we won’t have a reprise. Shame that. I did LOL muchly.

Gemma Collins is of course, a sitting duck for wrathful comments. One of those orange-hued ducks you put in the bath. Some reality ‘stars’ (and I use the word loosely) have the grace to look a little abashed at their lack of knowledge or skills. Not so our Gemma, who boldly declares before each challenge how she will ‘smash it’. She does indeed smash a plate, but that doesn’t make it into any of her dishes. We assume. Perhaps that was the crunchy part?

Gemma doesn’t believe in doing herself what others can do for her, so she bosses about the staff in both the professional kitchens they are sent to. ‘It’s done’, she announced proudly, each time a harassed chef wanted to know if she’d peeled her effing potatoes. Yes, done by SOMEBODY ELSE. She is staggered to the point that her face nearly moved that the contestants have to also serve the food that her team-mate has slaved over.

It is quite refreshing in some ways to see a woman who doesn’t forever downplay herself and her abilities. The irony being that those with the least ability often have the most arrogance. Spencer Pro-Stud-Muffin Matthews, her posh counterpart, is similarly confident. He’s also quite good though and hard-working. Damn him. Gemma is indeed breath-taking, having reached through TOWIE a level of infamy completely at odds with any discernible talent, but directing rage at her is misguided. We have created these reality TV personalities and we must pay for it. They’re just another brick in the wall.

Comments Off on Celebrity Masterchef: The Wall