Holby City: The storm is upon us

(Series 19, ep. 57 ‘Kingdom Come’ by Ed Sellek 7.11.17) Remember a few weeks ago when Hanssen told Fletch that a storm was coming? This week, the storm arrived. The proposed merger with The Mythical St Francis is underway, and Holby is in danger of being closed down.

Obviously this must not be allowed to happen. I refuse to spend my Tuesday evenings watching a programme called St Francis’s. Though they’d probably call it ‘Frank’s.’ No, it won’t do. Holby must stay.

The Man with the Master Plan to impress the assessors, who were coming to give Holby the once over, was none other than Sacha. It was an exciting scheme that was something to do with accelerated post-surgical recovery that would have patients up and about and exiting via the gift shop practically as soon as their anaesthetic had worn off. 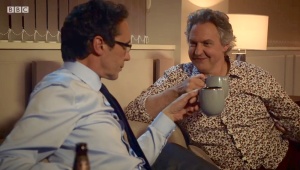 It was lovely to see Hanssen decide he could lean ever so slightly on Sacha. The stress of being the person at the helm of the (possibly) sinking ship had been taking its toll – there was a scene where he was standing in the middle of the busy ward, and he looked so alone. But I don’t actually think I’ve ever seen him smile so often in a single episode as he did when Sacha’s plan seemed to work, and the rest of the team pulled together like the total professionals they are.

On Sacha’s urging, Hanssen called a meeting of key members of the hospital who happened to be around, and filled them in on what was happening. It was one of those times when he’s at his best – honest, human, and heroic.

These are words which we probably couldn’t apply to his son. Fredrik was preoccupied with his junior doctor prize bid, and was keen to do some showpiece surgery in front of the assessors. This was bumped in favour of surgery that could highlight Sacha’s new plans, and Fredrik wasn’t best pleased. Later on he came to visit Hanssen in his office and Hanssen invited him to share the bottle of craft beer a patient had given him. Hanssen had a go at being fatherly and said he knew Fredrik was upset because of his wife going back to Sweden. Fredrik got all lip trembly and moist-eyed, but left Hanssen to share the beer with Sacha.

All of this meant it was rather left to the folks on AAU to worry about the absent Ric Griffin, on gardening leave while being investigated for the manslaughter of patient Mrs Warren. Scary Sue on ITU (unseen, but I love her already) had been mouthing off about Ric, and patients are being scared off by reports of deaths on the ward. Frankly it’s not looking good. Donna was feeling guilty that it was her testimony at the coroner’s court that had got Ric into this pickle, and Mrs Warren’s son Jeremy (Nick Rhys) kept wandering about, just to add to her discomfort.

The best lines this week came from the Darwin patient, Mr James (Steve Furst), who wasn’t happy at the state of Matteo’s hair. “Must have patients coughing it up like cats,” he observed, which is an enduring image indeed. About to go into theatre, he insisted that Matteo should tie his hair back: “I’m not catching MRSA from that ludicrous over-grooming.” Apart from slagging off Matteo’s hair, Mr James was also there to make Ollie reassess his post-Zosia life. While Zosia is apparently doing incredible things in America (and is styling herself ‘Zosia Self’ these days), Ollie was spending his day fretting over his lost wedding ring. Between Mr James and Matteo, Ollie has now come to the realisation that he can’t let his life be clouded by the loss of Ms Self, and if he’s to have a glittering career of his own he must do it all by himself.

But will he be doing it at Holby, or the Mythical St Francis’s? As Hanssen and Sacha enjoyed their craft beer, Hanssen said that he doesn’t want blind devotion – he wants people who’ll tell him when he’s wrong. Sacha promised to do just that. “Then there’s hope,” said Hanssen. And that’s good enough for me.

6 responses to “Holby City: The storm is upon us”