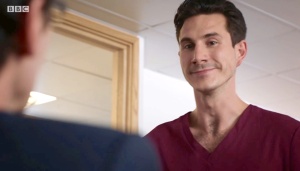 (Series 19, ep. 54 ‘Thicker Than Water’ by Peter Mattessi 17.10.17) Everyone was having fun with Swedish in this episode, in which we learned that a name that’s spelled Sjoberg is pronounced something like Herbery. Holby is so educational.

Anna (pronounced ‘Anna’) Sjoberg/Herbery (Linda Ekman) was at Holby with a mystery illness, which Fredrik diagnosed pretty brilliantly. The diagnosis seemed slightly less brilliant when we discovered that he had previous knowledge of this patient, and indeed her arrival at Holby was no coincidence. It was all part of his trial of a fictional wonder drug, and his attempt to get Hanssen to put his official stamp of approval on a phase 4 trial of it. 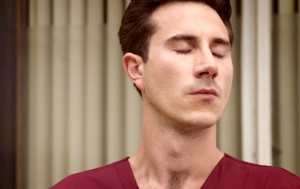 While we leave Hanssen pondering his decision, can we talk about Fredrik a bit more? Frankly if I was admitted to Keller I’d ask very nicely to be seen by the cuddly man in the flowery shirt rather than the spooky Swedish guy whose smile vanishes the minute he’s finished with it. It’s probably because he already knew Anna, but whenever he left the poor woman’s bedside the mask of friendliness dropped from his face for a second and he is actually a tiny bit scary.

Back to Hanssen and his decision, which was: “Not at this stage.” Or no, in other words. Mrs Fredrik (Dana Smit), who had been doing some fundraising around the hospital (schmoozing rich people as opposed to shaking a bucket in Pulses), thought it was time to cut their losses and head back to Sweden. We’ve seen that Fredrik has daddy issues, though, and he chose to stay and try to persuade Hanssen that the Fictional Drug trial deserves his support. He wiped a tear from his eye as his wife drove away, though, so he does actually have a heart.

In other Keller news, Lofty has applied for a transfer to AAU, as things between him and Dominic remain frosty.

If his transfer request is approved he may well arrive on AAU in time for a party. Raf has only gone and proposed to Essie, and she’s only gone and said yes! Has she been swayed by his dashing turn on Strictly Come Dancing? Possibly.

This came at the end of a tricky shift for Raf, as his brother Giuseppe was staying with him. You knew that this had to mean the Curse would fall upon him at some point. At first it seemed to fall upon his boss/girlfriend Cindy (Jo-Anne Stockham), but it wasn’t long before Giuseppe was barfing blood in the Linden Cullen Memorial Shrubbery and having to have his innards repaired by Nina. 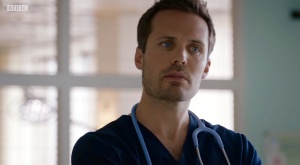 Talking of exciting, Oliver Valentine isn’t, apparently. Up on Darwin everybody loves Dr Damon Ford, and they all want to be his mentor. But would he choose Matteo or Ollie? Matteo once did a ninja-level procedure in a helicopter, plus he used to be in a band (of course he did). Whereas Ollie… didn’t. “You’re trying to be more interesting than me,” Ollie said. “I don’t have to try,” Matteo replied. “I have a very interesting life with lots of interesting… interests,” Ollie said, after a hilarious attempt to act ‘down with the kids’ with Damon.

When Darwin patient o’ the week Norman (Jason Furnival) had tickets to a sell-out football match he wasn’t going to be able to use (because stitches etc) there was a bidding war between Matteo and Ollie so they could impress Damon with a coveted ticket. Ollie won by paying well over the odds, and then it became clear that he knew nothing about football and was a little bit scared of going. So he gave his ticket to Morven. It was all a bit of fluffy light relief but beautifully done thanks to the marvellous comedy skills of James Anderson and Christian Vit,with a helping hand from Rosie Marcel – Jac is always keen to have a bit of fun at Ollie’s expense.