Holby City: Guy Self is back in the building

(Series 19, ep. 43 ‘The Evolution of Woman’ by Simon Norman 1.8.17) Nina has been Queen of Medicine (or whatever her job is) for all of five minutes, and she’s already circumvented the mythical HR department and the CEO by bringing a familiar face back to Holby. “Guy Self, darkening my doorstep,” muttered Hanssen, nicely marking his own territory with that use of “my doorstep.”

It seems that Nina and Selfie have History, and it’s something to do with Berlin. Whatever it is, I think Nina has the upper hand at the moment, or she thinks she does. That’s the thing with Selfie, you’re never quite sure where you are with him.

His arrival meant that we were treated to one of those awful, terrifying wide-awake brain operations. The patient was a man (Fraser Ayres) who had terrible, life-ruining OCD which was so awful that he was willing to let Selfie poke about in his opened-up brain to try to make it better. I lost focus for a moment when they were explaining why there was also a CT angle to this that required him to be on Darwin, but I’m not sure it matters really. What matters is that Selfie is back. What will Zosia make of it? And Jac? And Ollie? I’m looking forward to finding out.

Morven woke up after a night of drinking and who knows what, to find a strange man in her shower. He wasn’t that strange – he was new F1 Damon Ford – and he’d apparently moved on quite quickly from imagining her naked so she wouldn’t frighten him, to not having to imagine any more. Morven made it clear that it had been a one-off, but at the same time it made her realise that she wasn’t entirely committed to Cameron. When Cameron’s mother Bernie overheard this, it wasn’t long before Morven had to make a phone call and let Cameron down gently.

The thing I loved most about this story was the really lovely pep talk Fletch gave Morven. He told her that not every relationship was going to be like she’d had with Arthur, and it was such wise advice because the poor woman is a bit adrift at the moment. Still, she’s now acquired a very sweet new flat-mate in the form of Damon, who was similarly understanding about her recent loss of Jasmine. 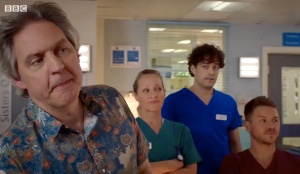 There wasn’t a patient o’ the week on Keller, because very little doctoring was going on while we were watching. I imagine they did lots of medical stuff while we were away looking at Darwin and AAU though. Everybody’s attention was on Sacha’s new girlfriend Julie (Tracy Wiles), the hospital’s volunteer librarian. Sacha had met her at Jewish Book Club, and Mama Levy very much approved. It became clear that this was because Julie was very, very similar to Mama Levy herself – fussy, irritating and always nagging Sacha about his dress sense and his posture. Very much like Chrissie, in other words. Luckily Essie, Dominic and Lofty were (always) on hand to point this out and make Sacha realise she wasn’t the woman for him. “She’s either super funny or she’s super homophobic” Dominic remarked. Dominic also said that he couldn’t care less whether she worshipped a glove puppet stapled to a cat, which is such a random comment that I was glad I didn’t have a mouth full of tea when he said it.

To find out how John Michie feels about playing Guy Self and to discover how this episode was edited, you’ll need the official BBC Holby City book, coming soon!

10 responses to “Holby City: Guy Self is back in the building”