(Series 18, ep. 38) It was the hottest day since Holby records began, but before you cancel your scheduled holiday to Tenerife and book a static caravan in Holby instead, it actually didn’t look like fun. Everyone was irritable and fed up, and that was even before you throw in the added pressures of grief, heartbreak, jealousy and Jac Naylor.

For everyone who’d expected Dominic’s reaction to Arthur’s death to be totally heartbreaking, this was the episode that finally delivered that. He’s been holding everything in for a few weeks, talking to Arthur’s photo but not allowing himself to cry. That all changed when he seemed to get a message from “the other side,” via a patient who was in touch with the dead via the medium of flatulence. The message he received was to sail Arthur’s ship, a beautiful model of a sailing ship that Arthur had left incomplete.

Dominic left it incomplete, too, as an attempt to fix it in the staff room was ended abruptly by Hanssen. “At what point did our patients become Spanish galleons?” he said – a sentence I’m sure he never expected to utter when he got out of bed that morning.

Adorably, Hanssen then finished the model himself, and he and Dominic went off to sail it. They first looked at an exciting new fish pond in the Linden Cullen Memorial Shrubbery, which I’m going to call the Arthur Digby Reminiscence Pool. It was a lovely thing, but they needed something a bit bigger in scale. Off they went to a park with a pond, and the ship sailed – for about a minute, and then sank.

It was this that finally allowed Dominic to let go, and he sobbed all over Hanssen’s lovely suit. It was an incredibly touching scene, with Hanssen’s wise, fatherly, comforting presence giving Dominic the safety to let his grief out. Dominic worried that he’d been a terrible friend to Arthur, but Hanssen knew that Dominic had been exactly what Arthur needed (and vice versa). “Unquestionably you loved him,” Hanssen said. “I did,” said Dominic, “And I still do.” “Well, what more could any friend want?” Hanssen said, producing a clean white handkerchief to wipe the snot off his suit. 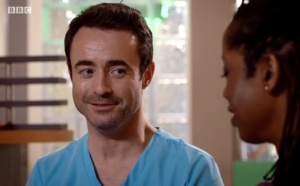 Passions of a different sort were seething on AAU. Fletch had been dumped by Psych Naomi, who wasted no time in flexing her flirt muscles at Raf. Is he going to let her get in the way of his bromance with Fletch? Oh, Raf, think of the Fletchlings! They already have nits – don’t add to their distress by breaking up the happy home.

Meanwhile the AAU patient o’ the week had got himself mixed up with some criminal activity, which culminated in a gang of thugs turning up in the Car Park of Doom. Someone was set on fire, Jac had something nasty sprayed at her and it all got quite tense for a minute or two.

Jac was in the car park because she’d just arrived at the hospital having wasted her morning waiting for a dentist appointment. She’d left Oliver Valentine with the responsibility for a famous tennis player who was about to have ground-breaking surgery. Ollie was feeling the pressure, particularly as Selfie kept trying to hijack his patient to get him to fund his Self Centre. Ollie did good work, but no moment was finer than when he was pursuing Selfie and his patient along a corridor and crashed into some shelves. Ollie is very good at collisions.