Holby City: Those left behind

(Series 18, ep. 36) This episode didn’t turn out how I expected it to. I’d expected the huge emotions of last week’s epic episode to carry on, with profound and beautiful words at the funeral to match Morven’s beautiful words as Digby lay dying.

Instead we had a church full of beepers going off, and our regular cast members speeding back to the hospital, which was rapidly filling up with wounded people following a train crash.

“It’s what Arthur would have done,” somebody said, and it is exactly what he’d have done, and why it was right to return the action quickly to the hospital. It wasn’t just the place where Arthur died, it was where he’d lived his life doing the doctor thing and saving lives. It’s what binds all the characters together. 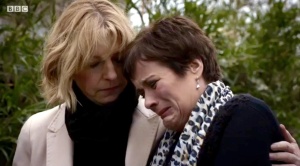 So instead of a weep-fest we had a more subtle look at how people have to carry on after a death. Though there were tears, of course – Serena breaking down in the Linden Cullen Memorial Shrubbery and being comforted by Bernie was a particularly poignant moment.

Dominic had a patient, Marisa (Alice O’Connell), who was supposed to bear a striking resemblance to Digby, though she didn’t really. Maybe that was the point – that when you miss somebody you see reminders of them everywhere. I liked her, anyway – she was so excited to be in the middle of a scene that was just like in a medical drama: “This place is awesome!” She was only disappointed that they didn’t order the FBC’s and LFT’s “Stat!” It is Holby and not Chicago, after all. Dominic wasn’t coping well with the loss of Digby, trying to hide behind work – which is never a good plan. Having his mother Carol around didn’t help (“Mothers. Can’t live with them, can’t poison them slowly in their sleep” he said, and I loved that little echo of Psycho-Dom), although her memories of Digby were sweet and funny and it’s always good having Carol around “checking on my Dazzle” because she’s ace. Dominic eventually had a meltdown, witnessed by Hanssen, who has told him to take a week off – but not before getting him to deliver a eulogy at Albie’s.

There was some excellent comedy provided by Jac, of all people, giving romantic advice to Oliver Valentine, telling him he needed to take his chance with Zosia. “It’s got grief shag written all over it,” she told him. He tried to put that plan into action, but it didn’t go too well – Zosia’s emotional defences are well and truly up. 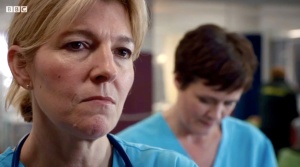 Being in the middle of trauma mayhem is very much Dr Bernie Wolfe’s area of expertise, although she was also struggling with domestic issues because her husband is being a twonk about the divorce. Bernie and Serena were largely cooperative, and Serena put in a good word with Hanssen, who is going to get Bernie to head up a complete overhaul of trauma care. 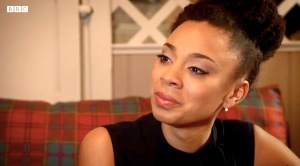 But what of Dr Morven Digby, the grieving widow? We didn’t see all that much of her (though more than we saw of Digby’s parents who had non-speaking roles and were left sobbing quietly), but in the scene in Albie’s at the end she almost had me in tears again, because she looked quite lost and separate from everyone, even among her friends. She’s usually such a sparkling, sparky person and she looks like her light has gone out for now.

So we didn’t see much of Digby’s funeral, but we saw a lot of what he left behind.

6 responses to “Holby City: Those left behind”