Casualty: The one with the spider(s) 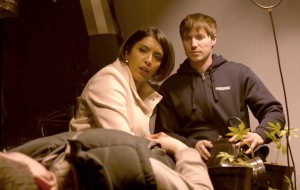 (Series 30, ep. 33) For one reason and another it’s been quite a few weeks since I watched Casualty. I don’t know whether the fact that I picked up the thread fairly easily means that not much has been happening, or just that this episode happened to focus on things I already knew about.

It was all neatly encapsulated by Max: “Some poor woman’s pinned up against a wall and a massive spider’s bitten a lorry driver.” “Only in Holby,” said Zoe.

This improbable scenario led to Max and Zoe having to work together to rescue a young boy with a fractured pelvis from the middle of a cannabis factory. This nifty bit of teamwork – Zoe arriving just when Max had literally wished for his “best friend” to appear – ensured that once again Zax seems to be back on. Hurrah! They really are the nicest couple since Dr Ruth Winters and Lovely Staff Nurse Faldren. 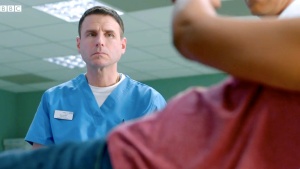 The woman who was pinned against a wall by a lorry story was rather sad, because the woman (Cathy Tyson) – an alcoholic who already had numerous health problems – was lovely. Looking after her was new nurse David Hide (Jason Durr), who was so quiet he made Dylan Keogh look like Alan Carr Chatty Man. I did wonder if he might be half Vulcan, because he had a Mr Spock like stillness about him (think Charlie without the sudden bursts of activity). It turns out he’s been out of nursing for two years with mental health issues, but was forced to go back before he was ready when his benefits were stopped. I thought that was an interesting storyline and I liked the character. I also liked the way Dylan took him under his wing a little bit and was giving him pointers as to how to fit in to a world that Dylan himself finds mystifying most of the time.

And Iain scored points with Rita when he stood up to her horrible ex.

One response to “Casualty: The one with the spider(s)”