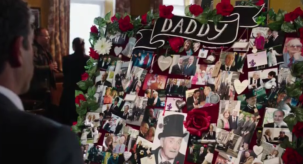 (Series 5, ep 7) It was black armbands for everybody this week – including Baby Genevieve – as the whole town pulled together to pay tribute to the funerial legend that was Daddy Simpson. As well as the sending off, there were also some arrivals. We had a cameo (for once, not from a Welshman), a return of an old favourite and (to my frustration) a revival of a familiar problem.

While most of the town is draped in black and in mourning, Stella is determined to power on and get her house ready for Katie and Paula who are both visiting (the latter for her father’s funeral and the former to meet her brother…actually that could apply to both but more on that later….). Stella’s also keeping busy to avoid Rob after their almost-kiss and, despite his asking her not to go all weird, she’s pretending to be her own voicemail which Rob thinks is very weird (and I just thought was hilarious). Luckily for Stella her rent-a-trainwreck bestie Paula is back to see right through her bull. First of all she blubs through her account of Daddy’s final night (cup of tea, 50 shades trilogy) and finding him gone the next morning (somewhere more permanent than surfing) and then, in a tender throwback to the last time Daddy “died”, she clarifies that this time it’s permanent. After this sweet little to-and-fro (that makes me miss the early series so much) Paula forces Stella to think about her terrible choices in the most Paula way possible, getting the important facts such as if Rob has kissed her bazoomas or touched her vajojo. The important conclusion is that in all of his work and distraction with Beyonce, Michael is a good guy, even on hand with emergency gin. Speaking of Beyonce, she’s only been a mother for 2 weeks and already any growth shown in last week’s episode has evaporated faster than you can say “megalateholidaydeal.com”. It looks like baby Jackson is going to be at Chez Stella until her mother is back from her impromptu trip to Magaluf but it’s OK because she’s never been one for all that titty lark and Jackson’s on the bottle. An extra baby leads to 3 less teenagers as Ben and Little Alan decide to escape the crying with a camping trip and Katie, fed up of what being a doting Dad has turned Michael into, jumps at the opportunity to get a break before she’s barely arrived.

Stella isn’t the only victim of a Paula interrogation during her brief return. It’s catafalques at dawn down at the Slosh Emporium as Paula wants to make sure that Ivan is qualified to give Daddy the send off he deserves. Ivan manages to jump through every hoop (with a little leg up from Zoe who is on top of her Funeral Vocabulary index cards) and eventually Paula is satisfied the funeral is fit for her funeral director/country and western singer/stand up comedian/speech therapist father. (NB: kudos to long time writer Rob Evans for doing so well at capturing the magic of Daddy in this episode, even in his absence.

The “speech therapist” comment was so apt and such a treat for long term fans, reflecting both Stella’s  flair for long running jokes and its expert characterisation). As she goes on her way, bemoaning a mate of her father called “Rubber” who is desperate to sing at the ceremony, she finds that apparently he isn’t the only uninvited guest. Waiting for her outside is her brother…but as far as she knows,  Paula is an only child.

In Luke’s world this week he is re-acquainted with his old pal Keckers, now able to bond over not just their gambling but having sick parents. The latter is trying to help his mother fulfil her bucket list before she succumbs to cancer. She has managed to get through most of it, including visiting the big Primark in Cardiff, but still has her heart set on the Elvis Convention in Porthcawl. This costs a lot of money but Keckers can’t bear to deprive her of meeting Chinese Elvis. Luke knows as a recovering gambler that he shouldn’t give him money, but the intentions are just too sweet for him and he eventually bends, giving Keckers a loan. The illusion is soon dashed when he sees his friend blow it at the bookies. He paid for the trip, but there was money left over and as this would have otherwise been used for Luke’s equipment he tears into him reminding him that being a massive dickhead isn’t an excuse to give up on all of his hard work to beat his addiction.

Back at Stella’s, Paula is collapsed on the couch in shock. She can’t believe what Jake said is true, but as if the likeness wasn’t enough (again, moving nod to Daddy actor Howell Evans getting his real-life son Warwick Evans to play the part) the stranger claims he came about from a tryst when Daddy was a ringmaster in the circus. Michael checks the will and lo and behold Paula gets her inheritance, Bobby gets his Troll Dolls and a ringmaster’s hat and whip are left to one Jake Toniolino. Heartbroken at the betrayal, Paula and Stella go off to process when they find Nadine crying on a bench, still riddled with guilt over Ivan. She tries to hide it, but you can’t be crying and “look like shit” without Paula being right on to you. Nadine reveals all and they try to reassure her that mistakes happen.

Another thing you can’t get past Paula is doing that one thing she already lectured you about not doing just yesterday after it was obvious you were feeling guilty about almost doing it once before…and I echo Paula’s glare as Stella’s guilt face reveals what happened while Paula was on Long Lost Family. She let Rob sodding Morgan creep inside her heart again and shared a long, passionate just-a-kiss. Again. You’re not getting out of this one, good girl. Her well-deserved rollocking is cut short by a phone call from Ben. Their camping trip has ended up like one of those 999 shows and Little Alan has collapsed after too much home brew. Reassuring Katie and Cerys’ fears, Stella’s diagnosis is water and rest (and Paula’s is that teenagers are pussies) and all is well in teenville…that is until Cerys finds Ben’s secret videos of her and his teenage crush is revealed in excruciating dancing-heart graphics.

Determined not to lose his sister as well as his daddy, Jake tries to make amends with Paula and goes to the most obvious place to find her. The Frisky. He warms her to him with a box of letters and photos that their father had sent him of his little girl. Soon enough Paula bends and they are reminiscing over their parents. Jake explains his mother Doreen (the famous slack wire acrobat, Slack Dor) were truly in love and once again the gloves are off as Paula and Jake embark upon a whose Mammy did Daddy love more. With some cracking clown insults, Paula is out in a drunken rage.

The day of the funeral is here and Aunty Brenda has tried to gather money for a 15 foot bronze statue of Daddy, mainly to show them layabouts at the council who should still be Mayor. George the Butcher acknowledges the tribute but no way he would expose Pontyberry to her rule again. Nadine also has her claws out as she puts Ivan in his place after he pretends he feels nothing for her. She is furious that she has risked everything for him when clearly it was all an act and she couldn’t be the (obviously prettier) Caroline Flack to his Michael Flatley. After swearing she is Never Gonna Dance Again, she storms out to

the appropriate instrumental and Ivan breaks his facade, pining over his lost love. Amidst the drama the funeral is a moving parade with colour splashed among the clothing (including Jake’s clown shoes) and the soothing tones of the Welsh Male Voice Choir. The ceremony is as fitting an occasion with both Bobby and Paula making powerful speeches, one reminiscing the legendary (and incomprehensible) quip at one-legged-Linda’s funeral and the other simply thanking him for all he gave to their lives. Finally, in true Ruth Jones celeb-magnet style, Daddy’s pal Rubber turns out to be the one and only Robert Plant who he roadied for back in the day.

Completing the shift in dynamic firmly to the sweeter side, we see that Luke’s words to Keckers finally had an impact as the ne’er-do-well comes over to introduce his mum to the man who was the cause of her trip – and possibly even the cause of her wedding. She points over to Hong Feng Evans, the Chinese Elvis impersonator who has stolen her heart. While this is a nice touch, most moving of all for the hour is Paula’s act of inclusion as she finally realises that the discovery of her brother is a gift and she’s ready to embrace him and their shared heritage. These scenes reminded me that in all of Paula’s comedy prowess, Elizabeth Berrington really was one of the acting heavyweights in the show and that balance really did make so much of what I fell in love with about it. The focus of this episode being on Paula was a gift and as a fan I’m so glad that Berrington is still so willing to return for episodes like these, especially hand in hand with Evans, there to represent a beloved character we can’t get back. All in all, a superb tribute not only to a Welsh acting legend but also to the magic the show created with characters like his.

One response to “Stella: Thank you, Daddy”