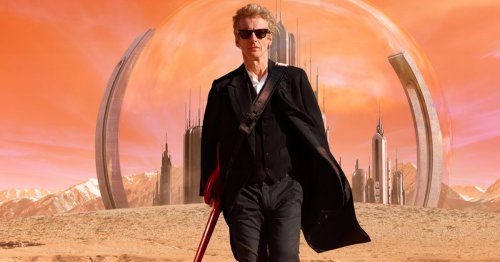 Apologies for covering five episodes in one go (and being so late getting to the first four – real life has been getting in the way of the important business of TV watching/reviewing recently). Let us take a leaf out of the Doctor’s book and ignore anything inconvenient while rushing towards the action…

It’s probably as well as that this approach requires me to be briefer than usual – certainly where the Zygon Inversion is concerned. It was better than the Zygon Invasion, but I stand by my assertion that a heavier hand should have been applied in the writing and/or editing room to give us one nice taut single episode. And while “five rounds rapid” is a lovely nod to the Brigadier, it would have been a proper twist to reveal we’d been dealing with Zygon Kate not the human one. (It also means I’m still wondering where Zygon Kate is…)

As for Sleep No More, I hate shaky camera footage (and ‘as seen on CCTV’ footage for that matter) unless it’s used sparingly. I was not spared here. If you had asked me at the end what the hell was going on, I couldn’t have told you and I couldn’t face watching it again to work it out. Sorry.

I did rather like Face the Raven. Nothing in life became Clara so much as leaving it, I thought. I didn’t cry for her, but I was moved enough not to cheer, which is saying something.

For the most part, I also enjoyed Heaven Sent. It got a little bogged down in its own mystery during our first run through the torture cycle, but the delightful rush of enlightenment regarding the inevitable outcome of the crystal punching and the realisation of the meaning of the skulls as soon as the Doctor stepped out of the teleport for (for us) the second time more than made up for it.

Which brings us to Hell Bent (spoiler alert etc)…

Sigh. When Stephen Moffat kept killing Rory and bringing him back it was a reasonable joke. To say it has diminishing returns, is something of an understatement. Without resorting to Wikipedia I can only think of two characters that Stephen Moffat has killed and allowed to stay dead – Madame de Pompadour and Billy Shipton (Blink). (Even then, they died of natural causes.) When the Ninth Doctor gleefully declared “Everybody lives, Rose! Just this once — everybody lives!” it was genuinely moving, now I hear Moffat telling us we must all “face the raven” and think “yeah, right”. We must, it’s true, but his characters don’t. And now I have to live in dread of Clara returning when Jenna Coleman gets tired of being Queen Victoria. Thanks for nothing (and for devaluing Face the Raven).

Are we done with all this hybrid talk now? (Please say we are…) Apart from anything else, it skated right over two hybrids that we’ve already seen – the half human Tenth Doctor and the Doctor-Donna. A nod to their existence would have brightened up the interminable hybrid talk, at least.

I did like the clever twist on the memory loss thing – very nicely done – and Rigsy’s artwork flaking off as the Tardis dematerialised was a neat touch too. Was it enough to make me come back for the next series? I don’t honestly know. Only time will tell.