(Series 17, ep.32) “I picked you because you’re bloody brilliant,” Dr Annabelle Cooper told Dr Zosia March. Zosia must be brilliant, too, because the thing Annabelle picked her for was to operate on her own brain (Annabelle’s, not Zosia’s, obvs). This made me mumble crossly to myself the way I do, wondering exactly when it was that Zosia got so brilliant at brain surgery, considering she’s only been doing it for five minutes. Scriptwriter Peter Mattessi got round my objections in a cunning scene in which Zosia listed all of the relevant experience she’s had. My word, she really is an expert. So that left only Selfie to convince. He wanted his daughter to “steer clear of the Annabelle thing – given your situation.” Was he genuinely worried about Zosia’s mental health, or his own ego? It’s never easy to tell with Selfie.

Hanssen was tempted to give Zosia the benefit of the doubt (while initially supporting Selfie), but Selfie threw a golf analogy at him. “I don’t play golf,” replied Hanssen, in a new voice that I’d have to term The Whisper With The Dangerous Edge. Quite thrilling it was, but not for Selfie, who had a go at calling his boss “Henrik” but was firmly corrected and told it was “Mr Hanssen.” How I treasure these moments. 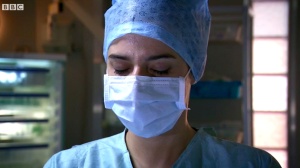 Eventually it was decided that Zosia would operate on Annabelle, Selfie would supervise and Ric, Hanssen and assorted non-speaking extras would watch tensely through the glass. This proved useful when Zosia went a bit wobbly during the procedure. Everyone was set to grab the tools from her trembling hands, but Hanssen made them wait while Zosia calmed herself down with a little mantra. All ended well, and surely a glittering career in neurosurgery beckons for Dr March.

But no. She’s already asked for a transfer to Darwin. “I just look better in blue,” she told Dominic, but if getting away from the maroon/wine/berry coloured scrubs was the main consideration, Keller wouldn’t have any staff left. Mainly she wants to get away from Selfie’s orbit, and who can blame her? 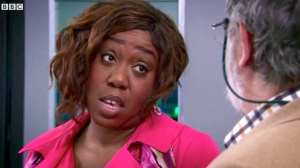 She’s going to Darwin in the nick of time because apparently Mo is about to join Michael Spence in Chicago for six weeks, so once again they’ll be a woman down. What is it with all the staff leaving for Chicago (apart from Ric, who is off to Australia with Jess)? Are the production team lining up a Chicago special or something? And if so, will Noah Wyle and George Clooney be in it?

To keep up the Effanga count at Holby, Mo’s dad Clifford is now a porter there. I know he isn’t officially an Effanga, but I’m talking genetically. He seems very nice, anyway. 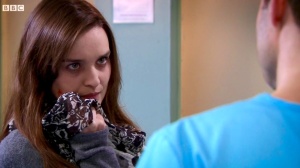 Someone who didn’t seem very nice, but in a good way, was the daughter of Raf’s patient on AAU. The mother had messed up her innards with alcohol, but the daughter, former medical student Lucy, was far more interesting to Raf. She had a nasty facial wound caused by some previous face-fixing surgery that went wrong, and she was fabulously snarly and sulky. This was helped no end by a beautiful Welsh accent. At one point Raf suggested Lucy might enjoy a little walk in the Linden Cullen Memorial Shrubbery. “There’s a garden, and you want me to walk in it?” she said, in a voice that was only just slightly less scary than Hanssen’s Whisper With The Dangerous Edge. 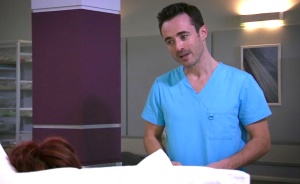 Luckily she’s come to the right place, what with Raf being the expert who reconstructed the Posh Visage and that. Lucy’s response to being shown photos of Posh was to smash Raf’s phone (rude), and Serena was not best pleased with his handling of the situation. I’m expecting Lucy to be back next week, because there’s obviously a lot more to this story.

Talking of interesting characters, this episode marked the end of Annabelle Cooper’s brief employment at Holby, what with recovering from brain surgery and all, so it’s farewell to Nina Wadia. It’s a shame, because I hardly had time to stop thinking of her as Zainab and she was gone.