Holby City: Everything must go 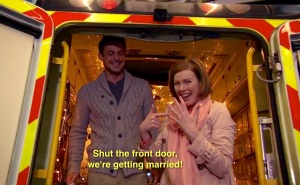 (Series 17, ep.27) This episode left me with a warm, fuzzy feeling – which is surprising considering that large swathes of screen-time were occupied by Selfie blustering around the hospital corridors.

The writers did their best to reposition him as a man of integrity who really just wanted to do what he does best – drill people’s skulls. The CEO life wasn’t really for him, he realised. He wanted to be there at the soggy end with his fingers in a brain. To add to the sympathy factor, his late wife was invoked (it’s hard doing something when the person who loved you doing it is no longer there, or words to that effect) and he seemed more than a tad affected by Jac’s sudden disappearance (taking her deferred maternity leave, it turns out). The lack of Jac also worried Ric, who was at Selfie’s shoulder at regular intervals looking concerned. “There’s a super-centre roaring down the highway with no one at the wheel,” Ric said, and I wasted too long in trying to picture what that would look like. 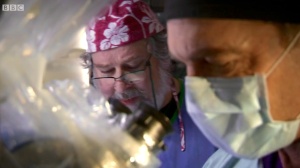 Selfie even apologised to Elliot for taking his Herzig away, though it was a fairly limp apology: “If I hadn’t taken away the Herzig you wouldn’t have discovered the Kibo,” he reasoned, with a classic bully’s defence, before promptly giving the Herzig back to Elliot because of that super-centre roaring down the highway. Because Selfie hasn’t really changed. Even though he no longer wants to be CEO, he’s not content with just being Mr Average Brain Surgeon (if such a thing exists). A quick phone call to the deep-pocketed Patsy Brassvine instantly secured funding for ‘The Guy Self Centre for Neurosurgery and Neurology’ (or Self Centre, for short). See? Just a normal Guy.

He announced all this to a bemused board of non-speaking extras and Ric, before putting Serena’s name forward as his replacement and assuring them that he’d work his notice – because despite having just given himself a new department and a new job, given Elliot a new job, suggested Serena for one and ruined the chances of Raf getting his Max Fac funding, he does like to stick to protocol wherever possible. 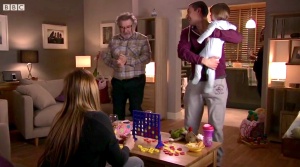 Right at the end, we paid a brief visit to the scene of domestic bliss that is the Naylor/Maconie household, to see Jac, Jonny and Emma playing Connect 4 (not a sentence I ever thought I’d write) and playing host to Elliot and Mo. It was absolutely adorable, as they all basked in happiness and the knowledge that the Reign of Self is all but over. 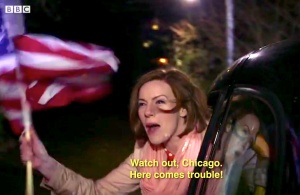 Also over was the Holby career of the glorious Mary-Claire, who has been one of my all-time favourite characters, and it was a fittingly lovely send-off for her (and for Jules Knight, leaving to continue his musical career). Filling all the wards with many boxes of her old toys, she prepared to say her goodbyes and go off to Chicago with her lovely dog Norman. But what of her true love, Dr Harry Posh? Well, I have to report that he’s made the best recovery from plastic surgery since Chrissie Williams and her vanishing scar, because he looks more or less back to normal. Having a bashed-in face made him reassess his priorities, though, and his priority now was revealed when an engagement ring fell out of his jacket pocket. It still took a bit of manoeuvring by Raf, Serena, Fletch and Digby (hilariously dressed as John Travolta in Grease) to get them together, though, and it could only be achieved by shutting them in the back of a fairy-light bedecked ambulance together. “Are you trying to bloody marry me, Harry?” said Mary-Claire. He is, too – and ‘MC Posh’ has quite a ring about it, I think.

Romance was also in the air on Keller, where Essie and Sacha eventually said they loved each other. Sacha had apparently spent the night in his car, which I think he should do more often because it made his hair look pleasantly fluffy.

14 responses to “Holby City: Everything must go”