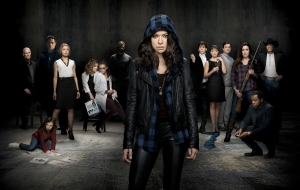 There are many factors that contribute to my love of Orphan Black. There is that it is a mind-bending delight of drama meets science meets comedy; there is that it’s a feast for examining the fundamentals of nature vs nurture; there is that it’s a ride of twists and turns and because of the excitement of never really knowing who you can trust…but really, there is one immense feature of Orphan Black that makes me love it and it is absolutely unique to this show. I love it because every episode has a moment, a very special moment, and each time I watch I assume it will be the last time it happens – but it never is. It’s the moment where I shake my head and remember that the character on screen is being played Tatiana Maslany…and that that one is too…and that one. I rub my cheek and can’t understand how I fell for the illusion yet again, that I forgot yet again…but I do – and if experiences of friends and other commentators are anything to go by, I am not the only one. This may make little sense for those unfortunate enough to have not spun through the whirlwind of series 1&2, so let me explain.

It’s all about the clones.

Drifter clones, smart clones, busy-body clones and raging lunatic clones. It’s a sci-fi, high action masterpiece that is so enthralling it doesn’t even matter if you’re not a sci-fi, high action masterpieces fan – myself being case in point. So, as a slow paced, family orientated character development junkie, what has me hooked to a show that has a genetic carbon copy of the main character jumping in front of train within the first ten minutes of the first episode? Because frankly, it’s also all of the above. What better platform for exploring character traits and relationships could there be than taking the same DNA and putting them in different environments for 30 years? 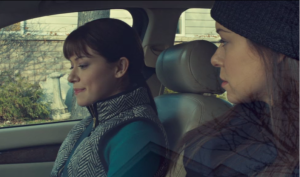 Where Orphan Black stands out so strongly is not just the unrivalled skills of its versatile lead, but the way it contrasts and explores the depths of the characters she portrays. They are all unfolding the same puzzle but being forced to deal with it in their own way and it’s here their personalities are really tested. The traits you would have associated with one of them emerges in another but still with their unique stamp – and they’re all Maslany. While one’s life completely falls apart, another comes out as a hero and finds solace in the thrill of the chase – and they’re all Maslany. You see this family of similar looking oddballs grow, bond and get pushed to the brink, each in their own unique way as if they didn’t have the same common thread and you remember that it is all freakin’ Tatiana Maslany! If I appear to be labouring what could essentially be seen as the show’s gimmick, it is only because of the subtlety with which it is treated on screen. The writers faultlessly thread each arc into the main action of the plot, never neglecting any of the alter egos and padding each with such distinction that even when Maslany is playing clones playing other clones she echoes the traits of the character that is playing the part rather than those of her character that her other character is playing. Confused? This is how the episodic casting amnesia hits.

The show not only has some of the most exceptional scenes of emotion, despair and tense drama it is also rife with comedy. If it’s not brought by clones it is brought by Jordan Gavaris’ flamboyant and ever suffering Felix, the foster brother of the show’s main clonetagonist Sarah Manning. The chemistry between Gavaris and all incarnations of Maslany is an absolute treat to watch, and just as Maslany deserves praise for being able to play so many alternative personas, Gavaris deserves as much praise for being able to so flawlessly maintain such distinctive interactions with each of his co- ..star. The supporting cast is just as steady and each supporting actor succeeds in never truly confirming their full intentions, absorbing themselves comfortably in the mystery and often toeing the blurred lines of morality, whether they are aware of the wider implications of their actions or not. Even when darker motives are revealed there still always seems the potential for redemption which provides a fluid sense of who is good or bad and the ever expanding plot complexities keep the story fresh, throwing unlikely companions together in unexpected circumstances. At times the dips and weaves of the science is hard to keep up with – even after a repeat watch there are still elements I am unsure of – but it has never inhibited my enjoyment. The drama keeps the show exciting and the characters keep me hooked so I have always been happy to ride along even if some things don’t make sense until later.

There are of course some plot holes, the suspension of belief factors and those frustrating “quit leaving your kid unsupervised!” moments, but they all add to the quirky, guilty-pleasure nature of the show. At times it is utterly ridiculous…but at times it is utter genius with poignant scenes of desperation, emotion and fierce loyalty that will have you screaming helplessly to the Emmy board as Maslany pulls off two performances worthy of the award in a scene only with herself.

If you watch from the beginning and the fast paced, bizarreness of the first couple of episodes are leaving you confused or doubting the recommendation, stick it out until the first main 3-way clone meeting when you truly see Maslany shine, and soon enough you’ll know if the style is not for you. If however, like me, you find yourself wondering why Maslany can’t just play all the parts everywhere then stock up the mini-bottles and find your closest performance of Blood Ties the musical.

Series 3 of Orphan Black is currently on BBC iPlayer (with a handy 5 minute Series Recap too!).

It will be airing on BBC from 27th September – episode recaps to follow.