Casualty: Connie looks at life from both ends 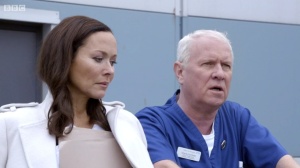 (Series 29, ep.28) The very sad Alfred Maxwell story continued, and we found that Connie had been visiting him in his care home after work every day. Alfred was unable to speak any longer and relied on spelling words out by blinking. The words he spelled out to Connie were stark: “Help me die.”

Charlie has, of course, been in exactly the same position with beloved Megan, so he was well placed to advise Connie. “It’s a hard way to say goodbye to a friend,” he said. Connie also knows this, having supported Elliot Hope on his trip to the assisted suicide clinic with his wife Gina, who also had MND. This scene was classic Charlie – some wise words and that middle-distance stare that’s his trademark. No matter how dire the circumstances get, you feel like the world is still balanced nicely on its axis as long as Charlie’s around. 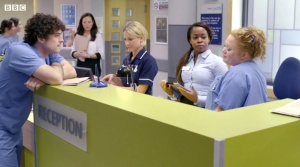 While Connie was pondering the end of someone’s life, a new life had just come into the world in an ambulance en route to the hospital. The young mother, Anya, had already decided to give the baby to someone called Gayle (not just anyone called Gayle, this was a specific Gayle). After the baby girl was born, Anya realised she was changing her mind. This prompted a bit of brains-speak in the direction of Connie about playing God, at which Connie assumed her default defensive setting by getting cross and snappy with Gayle and the baby’s father.

At the end of the episode, we left Connie going into Alfred’s room with some drugs she’d stolen from the ED drugs cabinet earlier. Will she go through with it? We’ll have to wait and see.

Those naughty people who make the preview trailers had me all excited at a glimpse of Zoe and Max, all decked out in finery and descending a staircase arm in arm. It looked like a Hanna-Walker wedding might be on the cards and I’d got my fascinator out of its velvet-lined box specially. Sadly, it turned out that they were just going to a posh ball together, but it did mark another step in Zoe’s public acceptance of Max as her partner. And he does brush up well. 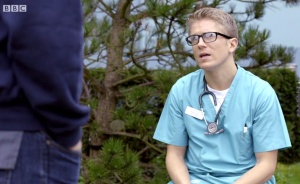 The relationship between Ethan and Cal is going to take a great deal more effort. Cal is really a bit of an idiot. Rather than concentrating on getting the law in pursuit of Ethan’s lost money, he consoled himself over the loss of Taylor by picking up another random blonde woman. Dr Lily Chao reckoned he showed “a sociopathic lack of remorse,” and I reckon she’s right. Ethan spent the episode dealing with a boy who’d been bullied, and there was a very telling little piece of dialogue. Attempting to cheer the boy up, Ethan was saying, “I can’t even remember the names of my bullies…” and then Cal heaved into view. “Except one,” Ethan said.

One response to “Casualty: Connie looks at life from both ends”