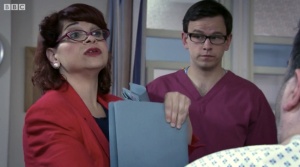 (Series 17, ep. 1)  Only last week I was wishing that there was someone on Keller who would speak the plain truth. My wish came true in fine style this week with the arrival of the new Keller consultant, Fleur Fanshawe (Debbie Chazen) – a woman who apparently has no self-editor at all and doesn’t give a hoot whom she offends.

“You’re the eternal registrar with multiple wives,” she greeted Sacha (multiple wives? Wait till she meets Ric Griffin), “And a penchant for a floral shirt.” Dominic was rather smitten. “She’s deliciously diva-esque,” he sighed. He wasn’t so keen when she started calling him Doris, but her description of Sacha as “Pudsey” was cruelly accurate. She’s cruel only up to a point, though, and this is where Fleur Fanshawe’s true brilliance lies. Some people need the sharp sting of a thorn in their side to bring out their A game, and Sacha is one of those people. When Fleur barged into his theatre and took over a procedure over which they’d disagreed (“It’s like Godzilla versus Bambi,” said Dominic), Sacha finally found the nuts to stand up for himself. “What I did expect was your professional respect,” he said. And he got it, because Fleur isn’t a monster. She doesn’t care what people think of her, but she’s not being horrible for the sake of it. She’s blunt with patients for their own good (though the way she spoke to a patient this week was very similar to the way Zosia speaks to them, and when Zosia does it she gets into trouble) and blunt with colleagues if they need it. She’s also very funny. 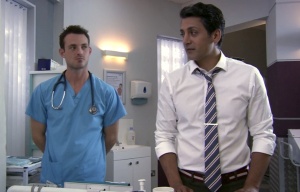 On AAU they were all excited about a visiting American dignitary from a hospital in Chicago. Was it a ground-breaking Holby/ER crossover? Sadly not quite, but the visiting dignitary was a bit spectacular. It was none other than everyone’s favourite snake-hipped, smooth-talking medic, Michael Spence – clean-shaven these days, but still thrilling. Everybody was gobsmacked: “Shut the front door!” said Mary-Claire. He’s in Holby on a mission to see if they’re worthy of some Chicago funding, but he’s also escaping the glare of publicity after having an affair with a senator’s wife, the rogue. It seems that he already knows Fleur Fanshawe (nobody arrives in Holby without knowing somebody else), but at least he won’t be having an affair with her because she told Dominic he’s not the only gay in the village. She meant her, not Michael – that would be a shock indeed, and besides, Michael has already spotted Zosia.

The main AAU story was still the fallout of the Smug/Posh/Barf triangle. Thanks to his personal life being in tatters and having to face the smiling visage of Dr Posh every day, Raf’s concentration isn’t what it should be and he missed a ruptured spleen and then went to pieces in surgery. Luckily Michael Spence was on hand to sort things out. Fletch, sticking up for Raf, told Harry to tell Michael what was going on re the triangle, though I couldn’t really see that it was Harry’s responsibility to do that. Anyway, Michael has told Selfie that Raf is a liability, and as Michael has his hands on the American purse strings, Selfie is going to have to do something.

On Darwin Jac was happily amusing herself with four back-to-back heart valve replacements, but then the ward started filling up with babies. Well, two babies anyway, and one of them was her Emma. The other was the newborn baby of a patient who didn’t even know she was pregnant. Another opportunity to see the glorious Mr T, so hurrah for that, and also a chance to see that both Mo and Jac, highly skilled professional women, still have a bit of a hormonal struggle when there’s a birth taking place. Jac is having to be absolutely brutal with herself in her attempt to keep a distance from Emma. Jonny can’t understand it and desperately wants her in Emma’s life, but Jac still thinks she’d be as toxic for Emma as her own mother was for her, and is pretending to be cold and horrible. You’re not fooling us, Ms Naylor – we’ve seen your face when you think nobody’s looking.