Downton Abbey: No one must ever find out 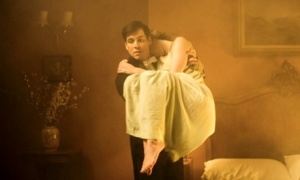 (Series 5, ep.1) Hurrah! Downton’s back! Throw another log on the fire (or get your footman to do it) – autumn has officially arrived.

There was such a lot going on as well – book burning and a misjudged attempt at hair colouring were the least of it.

That random band of persons known as The Villagers decided to set up a War Memorial Committee, for the purposes of a permanent erection to honour the fallen. Lord Grantham wasn’t sure what he made of such a modern idea (though it did temporarily take his mind off the horrors of a Labour government), but he didn’t need to worry anyway as The Villagers were so modern they didn’t want him to chair the committee – they wanted Carson. As in, his butler. His Grace tried to accept this with grace, which was not helped by his wife. “I know you hate not to be wanted,” she said. So comforting.

Lady Edith was taking a lot of interest in the little girl the farmer and his wife have adopted. “I wonder where she gets her colouring from?” the farmer’s wife mused, oblivious to the fact that the child’s hair was the same colour as that of the Ladyship upon whose lap she was sitting. The farmer knows Grantham colouring when he sees it, and has suggested that they “need to find a way for [Edith] to live the truth without telling the truth.” He’s deep, that farmer.

Possibly a bit too deep for Edith, who never seems to be the sharpest hatpin on the dressing table. Later in bed she emotionally flung aside a book she was looking at (it was a book once owned by her lover, who has gone AWOL in Germany, but just in case we forgot that, it was a German primer). Lady Mary might fling books aside, but I’m sure she’d never do it in the direction of a blazing open fire. The ensuing fire scene was quite thrilling and gave Lord G the opportunity to be all decisive and marvellous, apart from the little hiccup when he discovered servant Jimmy in the bed of a visiting m’lady. And it gave Thomas the opportunity to rescue Edith and save him from being sacked again.

The Glorious Lady Mary was still being wooed by Lord Gillingham, and everybody approved. They may not approve so much if and when they discover that he’s proposed a “getting to know you” -style holiday with shared sleeping arrangements and everything. He reckons after a week of hot Gillingham lovin’, Lady Mary won’t be able to resist walking down the aisle with him. “No one must ever find out,” Mary told him. “Let’s behave as if we aren’t in a super-popular prime-time drama and pretend that sort of thing will never come out in dramatic fashion.”

– Lady G’s maid Baxter came clean to Her Ladyship about her criminal past, thus breaking the evil hold Thomas has over her.

– The Dowager tried her best to nip a romance between Isobel Crawley and Lord Merton in the bud. It just won’t do for good old Isobel to start being a Ladyship.

– Daisy wants to learn maths so she can look after the farm she’s going to inherit, but Carson supportively says that while she may not always be a cook, she’ll never be Archimedes.

– Mr Molesley has started dyeing his hair in an effort to impress Miss Baxter, but nobody could cope with it. I couldn’t actually see the difference, but Lord G said it made him look “very Latin.” And not in a good way.

– They still haven’t got round to cocktails at Downton, because Lord G tried them once and never recovered.

– And that school teacher person has been inserted into Downton life and the more traditional family members (Lord G, Lady Violet, Carson) aren’t amused by her socialist attitudes.  This week’s Life Lesson from Lady Violet: “Principles are like prayers. Noble, of course, but awkward at a party.”

Comments Off on Downton Abbey: No one must ever find out