Revenge Of The Egghead: A poor platform of pretension 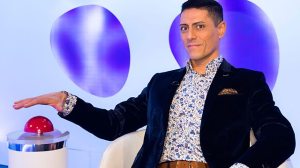 If ever there was an egghead I’d like to crack with a teaspoon, then it would be that of the insufferably pompous C J de Mooi. Famed for his place on the BBC 2 Egghead panel and his subsequent failure to ‘crack’ the acting world, his apparent love to hate persona has won him his own spin off which began this week.

Simply returning CJ to our screens should be considered revenge enough, but the setup of the show goes a little further. In a brand new premise to television, a selection of everyday folk come up against a quizzing expert in order to win a sum of money. Hand picked from the gutters of obscure idiocy by producers eager to show what CJ is made of, the five hopeless contestants were merely pawns in a platform to elevate CJ to panto villain status, a role he plays a little too convincingly to be entertaining.

The contestants answer general knowledge questions and, when they give a wrong answer (believe me, so far this is far, far more common than when they get a correct one) they are forced to do the walk of shame to a podium where CJ fires one his own (or his PA’s anyway) crafted questions. Get this wrong, and they lose a life.

During the process, we are subjected to relentless and staged shots of CJ looking bored, tired, scornful and a little bit constipated. Eventually, after dragging on for what seems like a much longer time than has actually transpired we get to the Final Chase, sorry, I mean final round. The idea of this is for CJ to answer ten questions and the remaining contestants must put their brain cells together (to form about six cells in total) to try and beat his score.

This idea is probably the strongest part of the show and certainly works on paper, but none of the whispered deliberations between contestants appear to have been edited out of proceedings so again, it’s a prolonged affair, with an inevitably unsatisfactory result, and the smugness in CJ which is no doubt deliberate, is nevertheless hard to swallow.

I shan’t be watching again, but anyone brave enough to see the series through, please do put the moment he gets beaten up on Youtube for me to see. I daresay it’ll be the only ounce of entertainment this show will provide.

What did you think of the show’s debut? Comments welcomed below.

9 responses to “Revenge Of The Egghead: A poor platform of pretension”