(Series 16, ep.4)  Jonny and Bonnie. It just can’t happen. It rhymes, for a start, and it’s impossible to make into one of those portmanteau names – though I have come across “BJ” on Twitter, which is almost certainly meant to be rude. Because the main reason Jonny and Bonnie can’t happen is that it’s making The Glorious Jac unhappy, and anything that makes Jac unhappy makes me unhappy.

Bonnie (she’s nice, darn her, and pretty too) is no longer an agency nurse. She’s a full-time, fully paid-up staff member, although obviously that means less within the fluid staffing configurations of Holby City than it would almost anywhere else. She is also “stepping out” with Jonny Mac, a fact which got our Jac so rattled she made a too-deep incision during surgery. Obviously she’s Jac, so she saved the patient anyway and treated her to a most beautiful piece of post-operative Naylor sarcasm. When the (annoying new-agey) patient complained that Jac had done an open procedure instead of a laparoscopic one as promised, Jac replied, “This morning you were suffering pericardial effusion as a result of your own actions and now, as a result of mine, you can go back to shopping and having lunch.”

Jac is aware of how she appears to other people, though. “I’ve just been called grouchy,” she said to Mo. “On a good day, maybe,” Mo replied.

But to get back to the person I may have to start calling This Bonnie Creature. The very worst betrayal, as far as Jac was concerned, was that Jonny told Bonnie about the baby’s health condition – and Bonnie mentioned it to the patient as a possible reason for Jac’s grouchiness, which was unprofessional and insensitive at the very least. Jac looked like she’d been slapped, and I rather hope it’s Bonnie who gets slapped before too long.

On Keller, Chantelle was preoccupied with choosing paint colours for the kitchen at the place she’s living at with Digby. It’s not a love nest, though: “We’re just sharing,” Digby said. “I’ll inform Newsnight,” said Serena, who also does sarcasm beautifully.

Serena’s mind was on her interview for the CEO job, but that didn’t stop her having a very firm opinion about patient JJ Kirby, who also happened to be Malick’s former mentor (he’s had many students but only one Malick, apparently). He needed surgery that would have been life-changing in the digestive sense (let’s leave it there, I’ve not long had breakfast), and Malick thought there was a better way to do it because you can’t allow top surgeons to go round with life-changing conditions. Like 85% functioning hands. You can see that brain-speak coming a mile off, can’t you?

Things took a critical turn while Serena was in her interview, which gave Malick the chance to use Digby as an avatar to do the surgery his way. This proved that Digby is an excellent surgeon, Malick is a great teacher – but also that Serena was going to be very, very angry indeed.

We don’t know if she’s got the job yet, but she occupies the seat of power fabulously. I thought Malick was extremely cocky with her and personally I’d have had him on a disciplinary for insubordination  (hang on – is it too late to apply for the CEO job?), but Serena let him off while still giving him to understand she wasn’t happy. “I do hope that’s not a smirk on your face, Mr Malick.” Indeed not – it’s a non-smirking hospital.

We left Malick at the end practising one-handed suturing, failing to take Jake to a fireworks display and confusing Ella Fitzgerald and Billie Holiday.

What was Ella Fitzgerald doing in the hospital? She was providing a soundtrack for Sacha and Chrissie’s last dance. Chrissie was given good news about her cancer, so Sacha went down on one knee and proposed a renewal of their vows. In the sumptuous surroundings of the Faith Room (or the Linden Cullen Temple of Anguish – LC has so left his mark on that hospital) they met to wait for the chaplain, but realised that they’re never going to work as a married couple. “We’re good together, but good just isn’t enough,” Sacha said. “I can’t think of anyone on this earth I’d rather have as a friend than you,” said Chrissie. The biggest bombshell was that Chrissie hates Rodolfo’s. She always has, apparently, and only pretended to like Holby’s premier budget Italian restaurant. I feel certain that Mo genuinely does like Rodolfo’s and, in a nutshell, this is why I like Mo more than I like Chrissie. 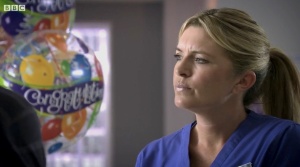 I wondered whether Chrissie’s decision to ditch her husband, a man so cuddly he’s practically a human Slanket, was partly triggered by a little incident in the Linden Cullen Memorial Shrubbery. She was having a heart-to-heart with Michael Spence and just as he got up to leave he put his hand on her leg. I should imagine that one touch was thrilling enough to bring memories of Chrissie’s glory days when her allure was in full force flooding back. You can see how Sacha might be a hindrance.

Next time: A face from the past comes back to haunt Chantelle; a face from the internet turns up to haunt Mo; and now man-magnet Chrissie is single again, can Michael Spence resist?