(Series 15, ep.44)  Sacha and Mo and Jonny were talking about these conjoined couple names that irritate me so much I generally refuse to use them. You know the ones – Brangelina etc. But it was quite funny when Mo mentioned ones that are commonly used by Holby fans – “Janny” for Jac and Jonny for example. It was like Mo had been reading the Digital Spy forums or Holby fan tweets, which would be weird as she’s fictional (I know, it’s a shock).

Anyway, one of the more apt names she came up with was for Chrissie and Sacha. I suppose it should technically be written “Chracha,” but it’s pronounced “Crasha,” and it really fits their relationship, which has been a bit of a car crash all along.

Over Chrissie’s long Holby career she’s mutated from being the good time who was had by all, to a rather bitter, smug, superior woman who thought she was worth far more than being married to the Nicest Man in the World. It always seemed to be just a matter of time before she swanned off with a better-looking, more suave example of humanity (yes, you, Michael Spence), but the actual demise of her relationship with Sacha  has been much more subtle. Driven away by Sacha’s lack of trust in her and failing to properly talk to her about Daniel being a bone marrow donor for Rachel, Chrissie did turn to Michael Spence, but only as a friend. Even though Sacha believes that it was more than that (because he’s never believed he was good enough for Chrissie), what has torn them apart has been the loss of trust and emotional intimacy (if it ever really existed). When Chrissie had her breast cancer scare, it wasn’t Sacha she turned to and when she found another lump it was Michael Spence she went to again.

I do have sympathy for Chrissie. When Sacha said they should separate and then asked how her friend was doing (the “friend” being a cover for Chrissie’s own medical tests), she said, “Frightened.” And she really looked frightened and alone and vulnerable, knowing that she most likely does have cancer, and it was sad because Sacha would have been the most loyal, dependable, comforting friend she could have had.

Talking of best friends, on Darwin, Mo and Jonny were still dealing with the aftermath of the Poppy/Hattie heart transplant controversy. Hattie was trying her level best not to get better, because she felt guilty for surviving when her brother didn’t. That was sorted out easily enough by Psych Sharon. What was harder to sort out was Poppy’s mother Nicole, who was still haunted by the idea that maybe Mo had been telling a fib when she said it was too late to stop the transplant. Lizzie Hopley was fantastic as Nicole. She reminded me of Olivia Colman in Broadchurch – so emotionally raw that she seemed drenched in tears. Mo and Nicole had a heart-to-heart (that wasn’t meant as a pun btw) in the Linden Cullen Memorial Shrubbery, which was so full of non-speaking extras it was like Kings Cross on a bank holiday. I’m not going to get into the ethical issues of what Mo did (Jonny Mac covered that ground quite well), but there was no doubt her heart was in the right place (gah! another unintentional pun!) and I did feel sorry for her. “At this rate you’ll take my place as the most hated doctor on the ward by… tea time,” Jac told her, and it looked like it might be true. The problem is that Jac can cope with being hated and enjoys playing up to it, while Mo’s toughness is more of a thin layer. It got sorted out eventually via Nicole meeting Hattie and then having a cry with Mo at the Window of Regret. 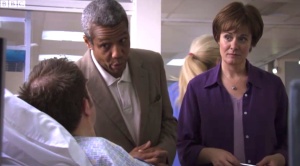 On Keller, Serena was being irritated by the continuing presence of her estranged husband, Edward. He may be an anaesthetist, but he’s certainly woken up Serena’s character, as she’s most fun when she’s annoyed and she’s now constantly annoyed. This week he was writing a speech for a posh medical “do,” which meant he was in her office and in her face for much of the episode. Serena had to find a plus one to take to the same dinner, so she plumped for Ric Griffin, with whom she’s always had a flirt/hate relationship. Ric has just come back from America, where he’s been modernising his thinking and has embraced a concept called Primary Defence. I’ve no idea what this involves, but if it’s as roaring a success as his Zero Tolerance policy was, Serena is going to have her hands full. Particularly as Edward is a Primary Defence fan as well.

Next time: Sacha is suspicious of his wife and Michael Spence; Serena turns to Edward for advice when her mother is readmitted to the hospital; and Elliot Hope doesn’t know where he stands with Psych Sharon.

10 responses to “Holby City: Trouble for Chracha, Monny and Sedward”