One of my favourite things about the return of Doctor Who to our screens is that, no matter whether the story satisfies or disappoints, I get to spend time watching Matt Smith act his socks off.

I may even start giving episodes sock-ratings, in which case The Rings of Akhaten would be a three-pair show. The pre-show titles alone were heart-breaking, even before we reached that gravestone. (And while I now understand Clara’s line about the leaf, and it’s Meaning, I stand by my opinion that it was a ‘darling’ that should have been killed.)

Anyway, this is Clara’s first official outing I guess, and having asked to go somewhere ‘awesome’, the Doctor takes her to see the Rings of Akhaten and a festival in which choristers sing a perpetual lullaby to keep their Old God asleep.

The prop, costume and prosthetic cupboards have been well and truly raided to give a real Cantina feel to the alien streets that the Doctor and Clara find themselves on. Having watched it twice, I still can’t decide how I feel about Doreen – though it’s not the first time the Tardis has been unable to translate an alien language for the companion (the Hath, in The Doctor’s Daughter, spring to mind).

I wish I could say I’m warming to Clara, but despite her good instincts, bravery, self-sacrifice and kindness I’ve yet to take her to my heart. All of which is making me feel like a heel, quite frankly. I’m also in two minds about her not being able to get into the Tardis to hide Merry. It could be that she simply hasn’t earned her key yet, or perhaps the Tardis knows more than the Doctor about Clara and really doesn’t like her. This is a ship with a heart after all, but we will just have to wait for the Moff to reveal all.

In the meantime, the perfectly lovely ceremony goes awry when one of the chorister’s muffs a note, and Merry (Aled Jones’s daughter, fact fans) is sucked across space to the big golden pyramid that is home to a mummy known as Grandfather.

Naturally, the Doctor and Clara give chase to get her back, at considerable emotional cost to Clara. Merry is whisked inside the pyramid and locked away behind a door with a “frequency-modulated acoustic lock; the key changes ten million zillion squillion times a second” (Clara: Can you open it? The Doctor: Technically no. In reality also no. But still, let’s give it a stab [Throws himself at door making not the slightest impression on it].)

Having broken in (and I have to say I really enjoyed Matt Smith’s holding open an extremely heavy door using only the sonic bit), they find Merry doesn’t want to escape, she’s prepared to sacrifice her soul to save her people. The Doctor’s speech to her, explaining just what such a sacrifice means, bears watching again when you’ve seen his own offer of self-sacrifice later. 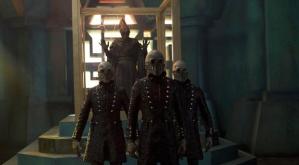 Just when you think the only thing left to do is escape the Grinch-like mummy and save Merry’s people, the creepiest creatures of the episode reappear, this time with a name: The Vigil. The only thing more scary than them turning up, is them disappearing because the Old God is awake and about to consume everything.

It probably goes without saying that my favourite part of the episode is the Doctor’s confrontation with the Old God. It’s not often the Doctor seems small, but to watch him pull himself up from diminishment to his full, magnificent, tear-stained, roaring glory, buoyed by Merry’s singing and perhaps almost hoping that the parasite will devour his millenium of painful memories, moved me to tears and broke my heart.

It is, of course, Clara who comes to the rescue when the Old God is not finished off by the Doctor (my reading is that it didn’t like the taste of the Doctor’s memories – and who can blame it? Not even the Doctor likes them. Your alternative suggestions are most welcome, of course) and sacrifices the leaf which represents the stories her mother should have had to finally destroy the parasite. I can’t say I’m sorry to see the end of that damn leaf though.

Same time next week for a submarine adventure then? I’ll bring the Jammie Dodgers…