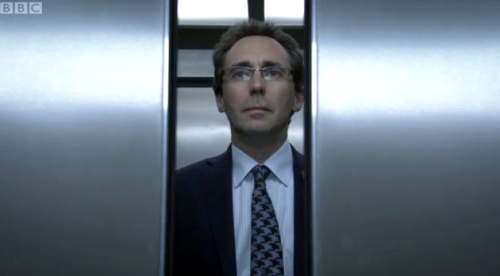 (Series 15, ep.4)   Not wanting to run into board member Cunningham, Hanssen pressed the B button on the lift and found himself in the basement. The basement is generally the place Holby cast members go to collapse, be attacked or have a sulky smoke. Nothing good generally happens there, but on this occasion, Hanssen found himself chatting to a Polish porter, Karol, whose job was under threat. This porter was a wise old sort, although he was blissfully unaware that he was talking to Henrik Hanssen, somewhat implausibly, given that Hanssen’s face had been all over local newspapers and TV news for weeks. It reminded me of the encounter between Kevin and the owner of the toy store in Home Alone 2: Lost In New York (I’m sorry, but that film is my cultural touchstone). Karol was a people-person and liked to make a difference to the people he worked with. He had the following advice: “If you can’t do great things, do small things in a great way.” 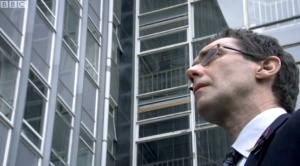 “Small things in a great way” beautifully sums up Guy Henry’s portrayal of Hanssen. It’s all about restraint and control, with emotions leaking through the carefully positioned mask. In this episode, he was caring for the son (played by Ben-Ryan Davies) of his first ever patient at Holby, but he was unable to save the son’s life. When Karol called by his office later to give his sympathies, Hanssen explained why the boy was so significant to him, and it was an incredibly moving piece of acting. “My first day here,” he said, “I saved his father… And I thought that I could save him.” The “him” just got lost, as he was so close to the edge of tears.

It was a classic Hanssen moment, and it was almost the last, for now at least. He packed a box with the things from his desk, and left the hospital. Watched from the Window of Regret by Jac, he put the box into his car and glanced around one last time before driving away. When will he be back? Will he be back? And what was the phone call about that he received in Swedish earlier? * 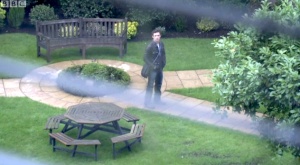 Jac was also watching Jonny Mac – it was that rare beast, the three-way Window of Regret. The reason there was a pane of regret between them was that Jac had just dumped him, because he’d started to get in the way of her career, and when it comes to romance v work, there’s no contest for Jac. Jonny had also managed to annoy Mo, when he tried to steer a middle path between both of the women in his life and get them to work amiably together with the slightly misguided strategy of being really annoying.

Meanwhile, Sacha was walking through a storyline which he and Chantelle seem to do on alternate weeks – trying to be something they’re not, until they eventually work out that what they are is just fine as it is. For short, we’ll call it “People skills save the day.”

* Apparently what Hanssen said in Swedish was, “I understand. I’ll come as soon as I can.” (Thanks to I♥NordicTV on the Digital Spy Holby forum).

Next time: Now Hanssen’s gone, Serena is apparently in charge of the hospital. That’ll go well. Jonny tries to build bridges with Mo. And Michael Spence has a bad day.