Holby City: All you need is love. And Camoxidan

(Series 14, ep.52) An entire episode dealing with Chrissie’s inner turmoil as to whether to marry Sacha or not does not sound like the stuff televisual dreams are made of. I mean, for one thing – duh! He might be built more for comfort than speed, but Sacha is officially The Nicest Man in the World, so why wouldn’t you want to marry him? Particularly when you’ve sampled more or less everyone else. But it was actually one of the best episodes of Holby I’ve ever seen.

It took place across the five days leading up to The Happy Occasion. On Monday, the betrothed pair were planning to keep the wedding quiet and Chrissie was looking about as excited as if she was going for a colonoscopy. Meanwhile, Michael Spence was worried about letting Eddi have the keys to the drugs cupboard, what with her involvement with Wolfie and his druggy behaviour, and told her she’d only be able to do this if she got them signed off by another doctor (ie Luc) first. The only way Eddi could cope with all this suspicion was with liberal doses of Camoxidan.

By Tuesday, Eddi was getting numb hands. This is what Camoxidan abuse does, as we saw from Wolfie. It was also making her stroppier than usual and making her shout at Billy Corkhill from Brookside, whose wife was in a coma. “Eddi is a great nurse, but she’s a little feisty,” Sacha apologised. Eddi’s Camoxidan supply ran out. The quiet wedding was turning into a slightly larger affair when Sacha’s daughters got wind of it and proceeded to cry and sulk because they hadn’t been invited. “They forced it out of me,” Sacha apologised again. Only to Chrissie this time, rather than Billy Corkhill.

On Wednesday, love was in the air, as Oli and Tara arrived at the hospital holding hands. I can’t help thinking of them as “the Valentines” already. Meanwhile, Chrissie was arriving at the hospital in a hot car with a bunch of Sacha’s relatives. (By coincidence, Sacha’s mum is also the mum of Jackie in Friday Night Dinner). Chrissie was having major doubts. “Am I making a terrible mistake?” she fretted in the general direction of Malick. This is Malick who was party to her terrible mistake with Dan Hamilton, don’t forget. On Darwin, Jac had found a use for Tara, when a Chinese patient needed a translator. Only the patient spoke Cantonese and Tara only speaks Mandarin, so she had to ring her mum for a translation. Plus she was in an even bigger fluster than usual because Oli had casually let slip that he loves her (all together now: Squeeeeeeee!!!). 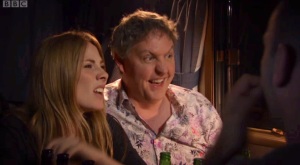 Thursday, AKA Wedding Eve, AKA Last Day of Freedom, depending on your viewpoint. If Chrissie thought she was going to slip quietly into wedded bliss, Chantelle had other plans as she’d arranged a hen party, complete with pink fluffy L plates for Chrissie. I think she passed that particular test some time ago. Marvellously, Sacha’s stag do took place in Luc’s camper van, and even more marvellously the only guests were Michael Spence, Luc – and Jac Naylor. It was perfect that Jac was there, because she’s far more at home with the stags than the hens and her friendship with Sacha is a precious and lovely thing. It’s also lovely to see Jac really smiling and looking relaxed and happy. Not that she wasn’t her usual sarcastic self, though. Sacha was telling them about the night he met Chrissie. “By the end of the night we had conceived Daniel,” he sighed, and everyone looked slightly queasy. Sacha didn’t notice, because he was radiantly happy. “I wish you could all have what I have,” he said. Jac didn’t miss a beat. “In fairness, most of the hospital’s had what you have,” she said. As Jac was leaving, she bumped into Chrissie, who may or may not have been on her way to tell Sacha she was having second thoughts. Any nonsense of that sort was swiftly banished by Jac, who reminded Chrissie in no uncertain terms that Sacha is officially The Nicest Man in the World and not to go breaking his heart – or else.

In other news on the Thursday, Eddi was busy switching Tara’s Chinese patient’s medication – giving the patient aspirin, so she could grab a couple of those precious Camoxidan tablets. Oh, Eddi.

And at last, The Big Day. Thanks to some last-minute work by Chrissie and the female Levis, the wedding took place in the restaurant where Sacha and Chrissie had their first date. Only a stone’s throw from the hospital as well. It was a magical occasion, with the groom looking like he couldn’t believe his luck, the bride looking happy (albeit in a not entirely convinced way), Jac looking sceptical and Eddi off her box on Camoxidan. Mo and Jonny Mac turned up – in fact most of the cast were there at some point, though I was a little disappointed that Mark “Jesus” Williams didn’t show up, because it’s always handy to have “Jesus” at a wedding party in case the wine runs out. Eddi made a bit of a show of herself and had to be taken back to the camper van by Luc to sleep it off, and Tara said something to Oli in Chinese which was probably that she loves him, too. Because that’s what people do at weddings. They get romantic, or sentimental, or hammered. Or they just do a spot of dad-dancing, like Jonny Mac.

22 responses to “Holby City: All you need is love. And Camoxidan”