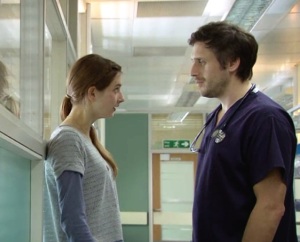 (Series 14, Ep.29)  Irish Dr Greg, eh? He’s been in Holby for over two years, and unfortunately for a large chunk of that time he’s been forced to run up and down corridors moaning, “Sahira! Sahira!” What a waste. It all started out so promisingly, as well. We first encountered him as Connie Beauchamp’s bit of Hot Irish Totty when she temporarily relocated to a posh private hospital in London. Subsequently he enjoyed a flirtation with the magnificent Mary Claire and the predictably flirtatious Chrissie and even a bit of a bromance with Joseph Byrne. He was a bit cheeky, a bit funny and – it was occasionally hinted – he might have Hidden Depths.

The depths got seriously hidden during the Sahira saga, when he became not much more than a sighing, hankering love-lorn loon. Then Sahira goes, and for his exit storyline Edward MacLiam is finally – finally – given a storyline to get his teeth into. Picking up from last week’s sexual abuse plot, Greg found himself in all kinds of trouble this week when the abused girl, Lucy, stabbed her father with a pair of scissors. Mary-Claire got the wrong end of the stick and thought Greg was being “inappropriate” with Lucy. Greg almost let the evil abusive father die in theatre. And it was left to Elliott (kindly) and Hanssen (cunning) to sort everything out. Meanwhile, Greg was spilling out his heart about his own past abuse to Lucy: “I’ve never had a life, not a proper one,” he told her. “I’ve never been close to people.” Not for want of trying, we might say, but 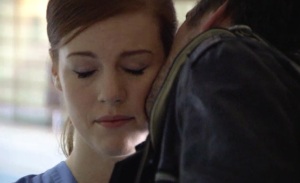 the point was that he didn’t want Lucy to carry the shame and secrets in her life that he’d carried in his. It was touching and, like last week, beautifully written and played.  Lucy was persuaded to tell all and get help, but it was all a bit of a scandal, nonetheless, and it was better for Greg’s career for him to relocate to somewhere that wasn’t Holby. “A few phone calls from me and a reference overestimating your ability will probably help,” Hanssen told him.

The saddest scene was when Greg had to say goodbye to Mary-Claire. Niamh McGrady is another good actor who isn’t given all that much to do, but when she does she’s fantastic. Her poor wee face when Greg kissed her on the cheek was so sad.

And Malick was bailed out of a tricky spot by cunning, scary and rather magnificent new consultant Serena Campbell.

Next time: Tara tries to impress Jac (uh-oh!), Ric clashes with Serena  Campbell and Eddi tries to pretend her kiss with Luc didn’t mean anything. Good luck to all of them.