(Series 14, Ep.22)  To start with a handy, pocket-sized summary: No Jac, no Oli, no Frieda, too much Sahira and Greg and a bit of Luc, Eddi and Malick. That just about says it all about the episode, but let’s just send it for a quick ultrasound to make sure we haven’t missed anything.

We got to see more of the formerly invisible Rafi this week. Someone must have had a word, because he wasn’t so mumbly this time. In fact he’s rather sweet in his way. The sort of calm, reassuring type that you’d want in charge of keeping you asleep during surgery. He was not, however, feeling calm about the nanny Sahira had appointed to look after their children (My Adorable Son Indy and the other one who is never mentioned by name). Not only was the nanny a mere slip of a girl at 25, but she had a nicotine habit. Sahira didn’t want to talk about the Adorables while she was at work. “Work mode, remember?” she reminded him in her usual pompous style.  Work mode, in Sahira’s case, involves a lot of crying, shrieking and reminding Irish Dr Greg that they are Just Friends. And a bit of parachute stitching when there’s time.  “I can’t do this!” she emoted to Irish Dr Greg later. The pressure of having a quiet husband, a smoking nanny, dying patients and a fondness for Irish surgeons with lovely noses is proving too much for her to bear. Something’s got to give, and I don’t really care what it is as long as it happens quickly. 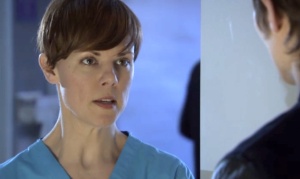 In the department we fondly know as AAU, a mysterious young man with cheekbones turned up with a mysterious woman who mysteriously knew which street Eddi had lived on in Leeds. Was she perhaps some savant who could pinpoint regional accents with devastating accuracy? No, she was simply the girlfriend of the man with the cheekbones, who happened to be Eddi’s brother.  Family members turning up always throws light on the main character, and we discovered a bit about Eddi’s troubled relationship with her mother. And it’s all bringing Luc and Eddi a bit closer.

Hanssen gave Malick the Clinical Skills Teacher  job, and frankly was a bit over-enthusiastic with the mentoring. At one point Malick was performing surgery and Hanssen was cheering him on from the observation window like a proud parent. All most odd.

Next time: Eddi’s brother Liam lets her down; Elliott has problems with his scheme to send the old machines to the Ukraine; and Frieda is irritated by Tara.