Strictly: Time to talk about the norks

It’s time for this blog to readdress the balance of discussion. No socio-political analysis this week. Time to talk about the norks. And the outfits.

This week is Movie Night! We can tell this because the dancers come out dressed up in immediately obvious outfits. Harry is Clint Eastwood. Robbie and Ola are The Blues Brothers. Jason and Kristina are Bonnie and Clyde; James and Alex are doing James Bond. First we get a bit of jiving to Saturday Night at the Movies by the professionals, which is the only time we get to see Flavia and her beautiful cheekbones. We need more of Flavia and less of Vincent’s eyebrows. In fact, none at all of Vincent’s eyebrows.

Bruce’s intros are particularly dreadful and he fluffs his first lines. When will the BBC learn that the novelty value of having an old duffer in his eighties shuffling around on stage and mumbling utter rubbish has gone? They’ve got Tess right this week though – lovely culotte jumpsuit (MaxMara), red lips, Rita Hayworth waterfall hair. It’s always such a relief when they’ve remembered to give her a supportive undergarment and I don’t have to spend the Tess’s Nest bits averting my eyes as her boobs slowly descend waistwards.

Time for the first dance. Robbie and Ola are in sharp narrow black suits, sunglasses and they both have lovely blond ponytails. And big white teeth. They’re quickstepping to The Blues Brothers! No it’s not! It’s Reservoir Dogs! Our sofa finally agrees it’s Pulp Fiction, then settles into disappointment that for the first time in any series of the show Ola is completely covered up. No catsuit. No small pants. Not even an arm is showing. All of us are missing her bejewelled umbilicus. Particularly the dads.

It’s ironic, then, that Ola appears to suffer a ‘wardrobe malfunction’ (bra snappage) and has to do some uncomfortable hoiking. Gorgeous Robbie doesn’t look good in the narrow trousers and despite his fast footballer feet the dance is rough round the edges. Two sevens and two eights is on the generous side.

Next up, Harry and Aliona. Given the outfits, we’re voting for Westerns, but no, it is Robin Hood! Aliona looks lovely either way, but Harry is just wearing a scarf, a white shirt and some tight pants and looking uncomfortable. Mind you, all the slebs look uncomfortable for the rumba which is a very embarrassing dance indeed. But Harry has nice lines and a good wiggle in his bum. They’re overmarked with four 9s. We had thought Alex and James would be doing a Bond theme, but it turns out to be Pretty Woman (Alex’s favourite film!). They’re in trouble this week after her dressing down from the judges, so she must be under pressure. Their American Smooth is not smooth. It is boring. James has to hulk Alex around. The judges really go over the top (I suspect they got a telling off last week) and call her gorgeous (she’s not – she has a little squashed monkey face); sexy (definitely not) and stunning (what did I miss?). Two 8s and two 9s – really overmarked. But her dress was lovely! 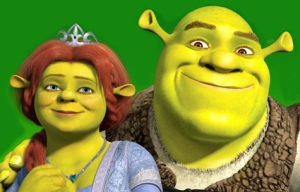 Does my bum look green in this?

Holly and Artem are doing a paso doble to Zorro – the first time the theme has indeed been obvious but this is only because of Artem’s Zorro mask. Holly and Artem ought to be a great couple, but I really think he doesn’t like her. This might have something to do with his girlfriend Kara glaring at then from the audience. But it might not. Anyway, he does have lovely teeth and a nice smile, and she’s what the Aussies refer to as a ‘solid unit’. She has a great figure. Their dance is actually very sexy. Holly has lovely boobs and there’s a lot of flashing of these and of her pants. It’s a great routine – there’s a lot of flamenco action, Artem uses Holly to give the floor a good polish and it’s very dramatic. This one’s fairly marked with two 9s and two 10s. Well done that girl!
Another unmistakable movie is Chelsee and Pasha doing a jive to Shrek. Pasha gamely greened up and stuck the Shrek ears on himself, but there was no need to worry –we’d have got it from Chelsee’s face. Never has a celebrity looked more like Princess Fiona than Chelsee. And they didn’t even need to dye her green. I think it’s the excess filler in her top lip. Although Chelsee is a really talented dancer, and the jive suits her bouncy style to a T, this one didn’t work for me, mainly because her perky plastic boobs have a life of their own. Whenever the dancing gets vigorous they are very distracting, going, as they do, in completely different directions from her feet. There was one huge error. A 9 from Craig and three 10s was outrageously overscored given the mistake. Pasha has a nice bottom though.

Finally Jason and Kristina. Of course it’s not Bonnie and Clyde, he’s doing Singin in the Rain and he’s Gene Kelly. The American Smooth is perfect for this. Jason’s solo dancing is great – tappy tapping down the stairs with his umbrella. Kristina’s frock doesn’t suit her and it’s giving her an odd look about the bust. But they float between beautiful lifts. Fabulous. Not a single mistake, he clicks his heels in the air and he still only gets three 9s and one 10. Boo!

Posted by Working the Look

3 responses to “Strictly: Time to talk about the norks”