Holby City: The bird has flown and the cat is out of the bag

(Series 14, Ep.7) Way back in April I said that Chrissie couldn’t possibly marry Dan Hamilton, because then she’d be Christine Hamilton (don’t anyone spoil my fun by telling me Chrissie is a Christina). If that was the only reason not to marry Dan Hamilton, Chrissie would be laughing all the way to the registry office. But there’s also the inconvenient truth that he’s (a) dull and (b) a bit gay. These truths have only remained hidden for so long because Chrissie, bless her, is (c) a bit thick.

After Irish Dr Greg spotted Dull Dan and Gay Nurse Stephen enjoying an intimate moment in the car park (not Malick/locker room type of intimate – not in the car park!) Dan knew he was on borrowed time. What you absolutely don’t want in such a precarious situation is for an old friend to turn up, and for her to turn out to be a blabbermouth alcoholic who enjoyed winding Chrissie up. “He hasn’t looked you in the eye all day,” she told The Future Mrs Hamilton. All year, more like. Dull Dan’s eyes are always gently gazing somewhere in the distance, as though he’s contemplating a set of rugby goalposts from the far end of the field. When Chrissie had an odd discussion with someone who was supposed to be Dan’s best man at the wedding, she realised there was something fishy going on, and she wanted to thrash it out on the Staircase of Secrets. And Dull Dan finally admitted that he does indeed have a roving eye, and not only does it rove to the far end of the rugby field, it has also probably roved to the far ends of a few rugby players over the years. In other words, Chrissie may not be man enough for him. 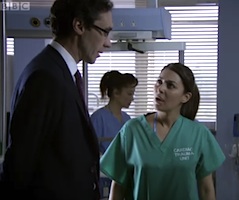 Casualty’s lovely nurse Tess Bateman once spent an entire episode impaled on a metal spike. What Casualty can do, Holby can trump. Two people impaled on the same metal spike (as each other, not as the one Tess Bateman was impaled on. That would be a ridiculous coincidence). It was a father and son human kebab tragedy, and it fell to Sahira Shah the Registrah to sort it out. She needed general surgeon-type help, and she needed the best. Ric Griffin! Er, no. She needed Henrik Hanssen, but it took a bit of persuading to get him to come out of his luxury office, where he has his fruit bowl and his little bird in its cage (quite tame) and his lovely view of the Hollywood of Hertfordshire. Then they couldn’t agree about the way to proceed with the case. I think she ended up being right, but I do somewhat glaze over and my eyes unfocus in a Dull Dan style whenever Sahira is on the screen, so I can’t be sure. What I can be sure about is that the bird metaphor has literally flown. Hanssen opened his window and let the wee greenfinch soar across the Borehamwood rooftops. It was a beautiful moment. Another thing I can be sure about is Guy Henry’s marvellously subtle acting skills. The way he manages to convey that a man who buttons his raincoat right up to the top and carries himself so formally is just crazy in love with a woman he can’t have – well, it’s masterful. 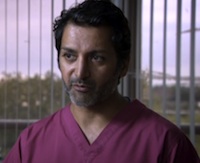 Elsewhere, Michael Spence was looking a bit grizzled. Was he growing facial hair for Movember, or was it to illustrate his inner turmoil and lack of sleep? He looked pretty good, anyway. Though his facial hair does come out rather greyer than his head hair, which leads me to believe that Hari Dhillon is no stranger to the Grecian 2000. This week he was sorting out a previous patient, who was possibly suffering from a leakage in one of Bhatti’s batch of bogus boobs. Only she wasn’t, and Michael managed to sort out whatever it was she was suffering from, because he’s actually a genius doctor. Even The Malick gazes at him in admiration, and you have to be doing well to impress the man with the biggest ego in the NHS.

13 responses to “Holby City: The bird has flown and the cat is out of the bag”